While Realogy Holdings Corp.’s second-quarter earnings per share fell slightly below analysts’ expectations, the company expects to normalize its expenses following a few recent acquisitions and benefit from a strong summer selling season in the third quarter of this year.

While Realogy Holdings Corp.’s second-quarter earnings per share fell slightly below analysts’ expectations, the company expects to normalize its expenses following a few recent acquisitions and benefit from a strong summer selling season in the third quarter of this year.

In its quarterly earnings release today, the Madison, New Jersey-based real estate franchise and brokerage leader said its second-quarter financials continued the momentum it reported in the first quarter, in line with strong home-selling momentum.

Realogy’s 2Q financials continued the momentum it reported in 1Q

Adjusted earnings were 66 cents per share, compared with 58 cents per share during the same period last year. On average, 13 analysts polled by Thomson Reuters had expected the company to report earnings per share of 69 cents for the quarter. 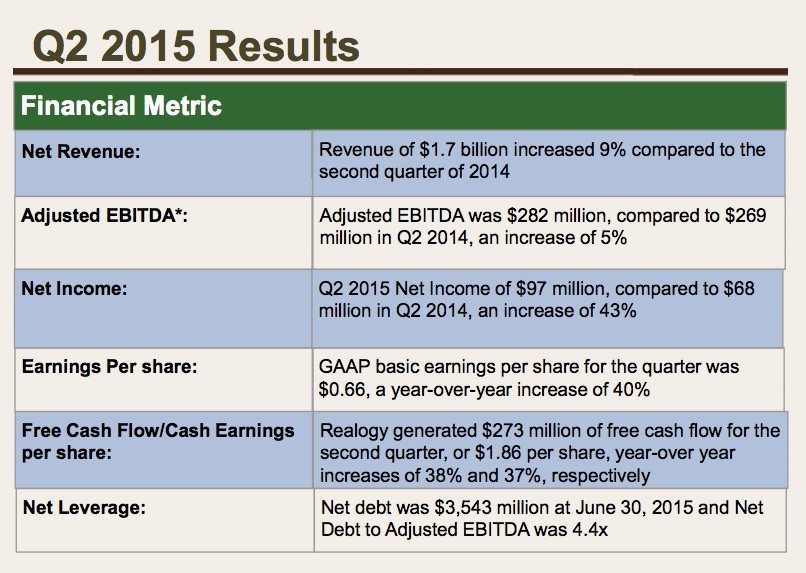 Realogy ended the second quarter with a cash and cash-equivalents balance of $359 million and no outstanding borrowings under its revolving credit facility. Total long-term corporate debt, including the short-term portion, net of cash and cash equivalents, totaled $3.5 million at the end of the quarter.

RFG experienced its best sales volume in the West and Midwest regions, with increases of 20 percent and 10 percent, respectively. The other two regions showed volume gains, but only in the low- to mid-single digits, Realogy said.

During the quarter, RFG added new franchise and sales production to its five residential brands, representing $85 million in franchisee gross commission income, “and continues to manage a pipeline of prospective franchisees,” Realogy said.

Through the first half of 2015, RFG achieved new franchise sales and sales production representing about $155 million in franchisee gross commission income. The segment’s existing franchise base saw a broker retention rate of more than 98 percent.

Richard A. Smith, Realogy’s chairman, CEO and president, noted that both ZipRealty, which Realogy acquired for $166 million last year, and Coldwell Banker United, which NRT acquired this spring for an undisclosed sum, have lower average sales prices.

“NRT’s average sales price would have been flat, excluding these acquisitions,” Smith added.

“The rollout is on schedule, and at a minimum, we will have about 300 franchisees operational by year-end,” Smith said.

Looking ahead to the third quarter, Anthony Hull, Realogy’s executive vice president, chief financial officer and treasurer, said the company is emboldened by the National Association of Realtors’ recent report on pending home sales, and based on NAR’s predictions, expects to see transaction volume gains in the range of 7 to 10 percent year over year on a companywide basis.

Looking beyond the third quarter, though, is difficult, with most economists unsure of what the housing market will look like at the end of the year, Smith said. However, he added that in order for the housing market recovery to continue to gain strength and momentum, “you need the first-time buyer, and they are slowly becoming more relevant.”

Realogy said it expects to end the year with a cash balance of approximately $650 million, more than double the balance the company reported at the end of 2014, “which positions us to further deliver our balance sheet,” Hull said.

Following the release of these results, Realogy’s shares fell 5.7 percent to $46.67 in early market trading. Nine analysts covering the company’s stock gave it an average recommendation of “hold.” Shares are expected to trade at about $51.17 in the short term. 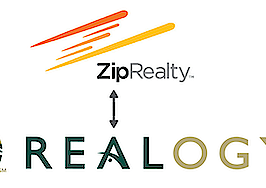 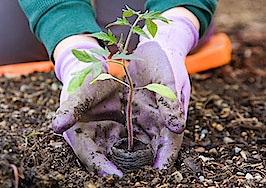 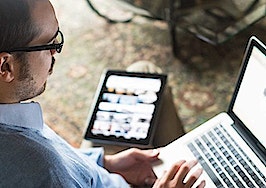 Realogy sees technology as key to franchisors' value proposition
Back to top
The best event in real estate kicks off next week! Tickets are selling quickly.Register Now×
Limited time: Get 30 days of Inman Select for $5.SUBSCRIBE×
Inmanpot
Log in
If you created your account with Google or Facebook
Don't have an account?
Create an Account
Forgot your password?
No Problem