Back in January, I wrote a post about Evernote.

I THOUGHT I KNEW WHAT ADDICTION WAS

Here’s what I find interesting: I wrote that post before I was addicted to Evernote. 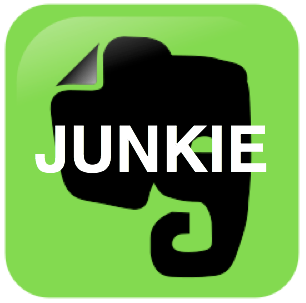 Mind you, I THOUGHT I was addicted. But, at that time, I had no idea how much more that addiction could and would grow.

So, I find myself writing this second post about this amazing technology, which has become the central hub of my digital existence.

If you want to understand the basics, I would ask you to go back and read that first post. Also, Evernote has a great video library that covers just about everything you can think of. You can check it out here.

The purpose of THIS post is to comment more on the actual, real-life, everyday ways that I use Evernote to make my life a lot easier, more productive and more organized.

So, these are the “top six things I do every day” with Evernote.

Shred your Moleskine. Burn your three ring binder. Donate your pens and pencils to charity.

There has simply never been a better way to take notes than via Evernote.

I recently traveled to a three-day, super-intense conference of business leaders in San Francisco. At one point, I stood at the back of the room and looked at everyone from behind. About 80% of the people had laptops on their laps.  And on about 80% of the screens, I could see Evernote.

“Aggregate” has become one of my favorite words ever since Chris Smith (@Chris_Smth) wrote this blog post, which I think is one of the 10 most valuable blog posts ever written about Social Media and real estate. Read that post, and do what it says. You’re welcome.

If you take what Chris said to heart, you’ll need a place to collect the content you’re going to curate. Think of it as loading your “content creation machine” with raw material.

Evernote is the PERFECT place to do that. Here are few ideas:

I am a person of 1,000 ideas. Rather than throw all that stuff on my MacBook Pro and eat up my hard drive, I put it all in Evernote.

Because of the ease with which you can organize stuff (more below), it’s super easy to find things using Keywords or by just being smart with the way you set up your Notebooks and Notes within Evernote.

In addition to being an Evernote addict, I am a Whiteboard junkie. As I Tweeted recently, I wish I had an entire OFFICE made of whiteboards. Every space in which I work has at least two…except for my shower, which has only one (not kidding, and sorry, I know…TMI!).

In any event, when I get a whiteboard “done,” I take a photo of it with my iPhone using JotNot Pro (thanks to Reggie Nicolay (@ReggieRPR) for that recommendation) and upload the whiteboard directly into Evernote (“Send to Evernote” is one of the share options within JotNot Pro).

Here’s a slightly different spin on the same idea, courtesy of a Tweet written by Clint Miller (@TheRealClint) as I was Tweeting about writing this post:

Another awesome feature about Evernote is that it allows you to access all your stuff from any device that has an Internet connection, as already alluded at 3 above. Further, you can get the Evernote app for the iPhone (my weapon of choice), Droid and iPad, which of course makes it even easier to access your things from anywhere at any time.

Further, the design of Evernote lends itself to super organization. First, by virtue of way you create Notebooks (think of them as either categories or projects) and the way you can name Notes, and second, by how you can Keyword search everything in your Evernote world.

As their slogan says, “Never Forget Anything.” It’s really true.

Another cool little feature of Evernote is that you can share stuff with people.

I frequently write blog posts that I’m not sure are good enough to publish. I’ll throw an outline together for that post, and then email it to someone and ask them for feedback. Rather than copying and pasting my Evernote Note into Gmail and then sending it, I just click the “Share” button at the top of the Note, and voila, email sent!

This is also great for sharing something you find on the web. Rather than copy and paste the URL into an email, you can simply “Clip to Evernote” (see my original post for menu bar items you can download for every browser) and then send them the entire “clipped” page.

This saves you time on the sending side, and the recipient’s time on the “getting them to see what you want them to see” side. Plus you’ve saved the item you wanted to share. Triple win!

I cannot tell a lie: until I wrote this post, I had never used Evernote to ORIGINATE Tweets & Facebook posts.

In fact, I just discovered this functionality. But my mind is RACING with all the things I’m thinking I could do with this. More on that later after I spend some time with it.

GET YOUR TRUNK ON!

As I said in my first Evernote post, there IS a little bit of a learning curve (which, looking back, I can’t recall why, to be honest). But it is SO worth it.

Also, FWIW, I just upgraded to the Premium version of Evernote, as I found that I was maxing out the monthly free usage (which IS fairly generous, BTW), and also because I wanted the enhanced sharing functionality that comes with the Premium membership (others cannot edit your shared Notes in the free version).

I think it’s probably the best $45 spent this year.

You can check Evernote out here.