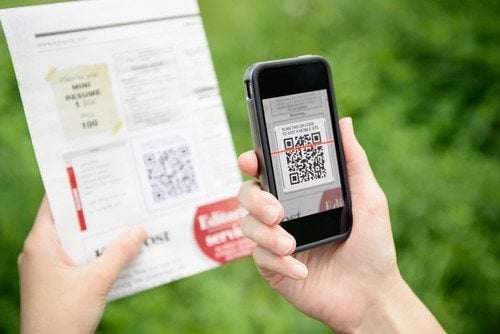 This post by Drick Ward was originally published on ActiveRain. Ward is a real estate broker with Neptune Realty in Virginia Beach, Va.

The real purpose of QR codes has been lost on most of the real estate industry, but that’s OK. I’m going to explain what they are for and why you want to use them. Most agents (as well as many other well-intentioned but misguided businesspeople) use QR codes to direct people to a website. With site statistics, you are able to see how many people came to you through that door, but that misses the whole point of a QR code.

QR codes were invented for the auto parts industry. Now picture it, a warehouse full of parts you can hold in your hand on shelves and in bins. But who is grabbing these parts? Mechanics. Well, since their hands are nearly as clean as a surgeon’s, what could go wrong? Oh, they have grease on their hands at times? Well, bar codes could get damaged and become unreadable — enter the QR code.

The actual “message” is written in the diagram seven times (I may be wrong on the count, but it’s a redundancy thing), which means two of the messages, the part description in this instance, could become damaged, but the QR reader can still get the correct info because of the other five times it’s imprinted in that block. This is why you sometimes see a logo embedded in the center and yet the message still gets through. So a QR code is a means of communicating data with built-in redundancy for increased accuracy of the message.

Think of the QR code as a different language. It’s a language our phones and tablets all speak fluently. So now, what message should we send in this new communication method? Well, everyone wanted to use it for URLs, so you can send prospects to your website, but that misses the boat on where they really bring value. Check out Zebra Crossing‘s QR Code Generator to start realizing the power of this tool.

URLs are only one thing they can do for you. Click on the drop-down to see other preformatted types you can create. If you are holding an open house and print invitations for the neighbors with a QR code for the open house on it, you have now given the recipient a way to quickly and accurately ADD THAT EVENT TO THEIR CALENDAR. Now how much more likely do you suppose that person is to show up at your open house? You’ll see from the site they can also be used for numerous other preformatted messages.

Scan these with your phone and see what options you have BUILT IN (the buttons at the bottom). Now start thinking outside the box and see how many other useful ways these can help you build your business.

As you see, the more complex your “message,” the more crowded your resulting QR code. But this is the best way to use amazing technology that already exists in the hands of most consumers. Try it out!