That is the question. 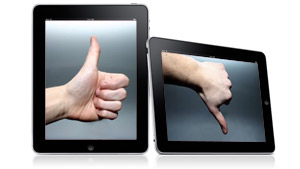 More often than not these days, after long day of meetings with clients or after I’ve finished speaking at an event, someone pulls me aside in the hallway. After a few furtive glances, they lean over to me and confess…

It’s a good question. And it’s a nuanced answer that’s sometimes hard to articulate in a confined setting. So I thought I’d use these pages to elaborate my reply.

The iPad won’t replace your computer

Yet. The iPad is the perfect companion device to your PC or notebook, but it is deliberately constrained in its scope. Many of the things a computer does well; typing, multi-tasking, the iPad struggles at. If you accept these limitations however, the iPad can be a remarkably focused productivity tool. Once you eliminate the background distractions normally found on your desktop, you might be surprised how much you can actually get done.

You’re going to have to sync

Since the iPad lacks a visible file structure (that is, a place to save your files) and it is somewhat complicated to load new documents on to it, using an iPad generally requires a complimentary Cloud storage strategy. By using a service like Dropbox or MobileMe to host your files, you can then access all your data over the web or through many apps that offer integration with these services. It may take a little time to set all of this up, but once you’re in “the Cloud” – you’re going to be free to roam.

The iPad needs the Web

Unless you plan on using it strictly for games, the usefulness of an iPad is almost exclusively tied to its Internet connectivity. So you can pretty much count on adding an additional data charge to your monthly cellphone bill. The 3G versions of the device are very easy to setup and can be used on either AT&T or Verizon. Personally, I stuck with the cheaper WiFi version and just added the tethering hotspot feature to my iPhone. In either case, you’re going to feel your wallet just a little bit lighter every month.

Set aside an app budget

Out of the box, the iPad comes equipped with most of what you’ll need. A great email program. A rock solid web browser. Contacts, calendar, music player… you catch my drift. But you’re missing out if you stop there. The iPad’s usefulness increases exponentially as you start to expand your app horizon. Start shopping. It’s the only way to figure out how you can begin to really use the device. You’ll buy some duds for sure. But there are some real gems out there too. I hope to feature some of those in my columns here in the coming months.

What about the other tablets?

So far this column has been exclusively iPad focused. And yes, there are many more tablets on the market these days. Devices using Google’s Android, Blackberry’s Playbook, HP’s Touchpad and others. Many claim more features, more bells and whistles. But here’s the thing folks, this is not a hardware game. Tablets are simple devices. They are, when all is said and done, blank slates. The joy in using an iPad comes from the software ecosystem that has built up around the device. No other manufacturer can claim parity on this front, yet. Until they do, I’d stick with Apple.

So, getting back to the question that I posed at the top of this post.

My answer is always Yes. Hopefully, now you know why.