A big New York-based brokerage is the latest to stop syndicating listings to Zillow and Trulia, claiming the sites do a disservice to homebuyers and sellers by serving up stale data, and that their platforms are not worthwhile advertising outlets for the company.

Rochester, N.Y.-based Nothnagle Realtors closed 8,070 transaction sides last year and, by that measure, was the 37th-largest U.S. brokerage, according to rankings compiled by Real Trends Inc.

Nothnagle Realtors President and CEO Armand D’Alfonso said complaints from buyers and sellers about listing inaccuracies on sites like Zillow and Trulia were one of the main reasons the brokerage decided to withhold listings it represents from the portals.

D’Alfonso also said the brokerage doesn’t want “to pay to direct traffic away from our site.” Some third-party sites, including Zillow and Trulia, sell ad space to agents with competing brokerages that appear next to listings that aren’t “claimed” by agents or “enhanced” by the agent or brokerage representing the listing.

A recent study sponsored by technology-focused brokerage Redfin found more than one-third of agent-represented listings on Trulia and Zillow were no longer for sale. The study, published last month, found the sites also lacked data for about one-fifth of properties that were listed for sale in an MLS (Realtor.com, thanks to its ties to the National Association of Realtors, gets listings directly from MLSs, and has not been a target of complaints about listing accuracy).

“We have found that on many third-party sites 30 percent or more of their listing inventory is inaccurate and out of date,” D’Alfonso wrote in a letter explaining the company’s decision to stop “automatically sending listings to third-party sites that we feel put our clients at risk” effective Nov. 7.

A blog post accompanying the letter further specified that “Nothnagle Realtors will no longer be syndicating their listings to Zillow or Trulia.”

When the Redfin-sponsored study was published, Zillow spokesperson Cynthia Nowak pointed out that MLSs aren’t a complete source of listing information, and that Zillow has “hundreds of thousands of rental, for-sale-by-owner, new construction and foreclosure listings, which often aren’t listed on an MLS.”

Zillow and Trulia both said consumers come to their sites for access to data like property records, tax history and crime reports that they often won’t find on brokerage sites.

Nowak noted today that Nothnagle Realtors had not been providing a direct listing feed to the site — one technique third-party portals use to improve listing accuracy — and that some agents with the brokerage continue to manually upload their listings to Zillow.com.

The decision by Nothnagle Realtors to stop providing listings to Zillow and Trulia is the latest flare-up in a long-running debate over real estate listings syndication.

While some brokerages have decided to withhold listings from third-party sites, others have decided to “enhance” them through negotiated advertising agreements, or by providing direct listings feeds in exchange for featured placement and attribution.

In January, a small San Diego-based brokerage, ARG Abbott Realty Group, pulled its listings from Zillow, Trulia and Realtor.com, the three most-viewed national real estate-related websites in the U.S., citing ethical concerns about the sites’ business models of using broker listings as a foundation for charging brokers and agents for ads.

After pulling listings from Trulia last year, HomeServices of America subsidiary Edina Realty — the largest brokerage in the Minneapolis-St. Paul market — stopped syndicating its listings to Realtor.com in May.

Edina Realty’s stated reasons for stopping syndication were similar to Nothnagle Realtors’ — a desire to capture more market share for its website, and an unwillingness to pay other sites for leads.

Other brokers view it differently.

“I’m glad these folks are pulling their listings from these large portals, because it gives us a competitive edge,” said Amy Keillor, chief cultural officer of Goldwasser Real Estate in Austin, Texas. Goldwasser Real Estate, which has more than 100 listings in the Austin area, advertises its listings everywhere, she said.

“If we were to pull our sellers’ homes from the large portals, I feel it would be doing them a grave disservice,” Keillor said.

In some cases, brokerages take advantage when others in their market pull their listings from a portal.

Earlier this month, Eden Prairie, Minn.-based Re/Max Results, an Edina Realty competitor, partnered with Trulia to enhance the brokerage’s listings on the portal, filling in the hole Edina Realty made when it pulled its listings from the site last year. 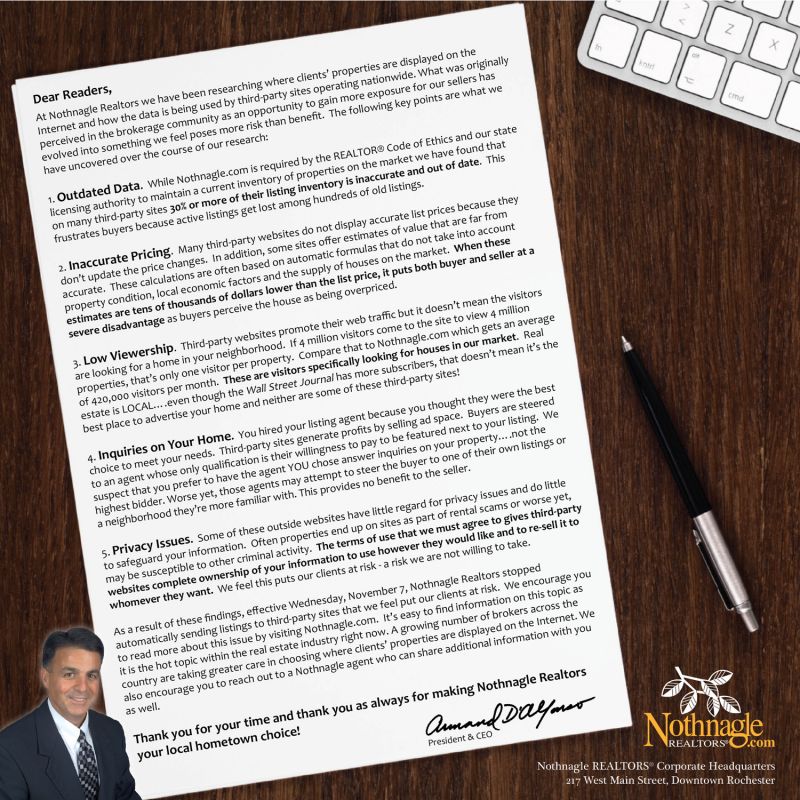 Image from Nothnagle Realtors’ blog post explaining its decision to stop syndicating to Zillow, Trulia and other third-party sites.

Other brokerages have taken advantage of Trulia and Zillow programs to improve accuracy and enhance listing broker and agent info on their sites by trading a direct feed of their listings to the sites in return for enhanced listing placement and identification.

Zillow recently disclosed that 48 brokerages have now signed on to its 5-month-old “Zillow Pro for Brokers” program, including some of the nation’s largest, such as San Francisco Bay Area-based Alain Pinel Realtors and Virginia-based Long and Foster Cos. Trulia launched its own broker-direct program in July.

Pittsburgh-based Howard Hanna — ranked by Real Trends as the fourth-largest brokerage by transaction sides in 2011 — said in February it would pay a seven-figure sum (between $1 million and $10 million) for special treatment of its listings on Trulia and Zillow.

On Zillow, the photos and a link to a lead form of three buyer’s agents will show up next to unenhanced listings on the site. On Trulia, a single large ad for a competing agent will show up prominently on the right side of listing pages for those listings not enhanced.

In some cases, when they are not an advertiser or they haven’t “claimed” the listing or filled out an agent profile on the portals, it’s difficult to tell who the listing agents or brokers are on the sites.

But in recent months both Zillow and Trulia have taken additional steps to identify the name and contact info of listing brokers and agents, providing it toward the bottom of the listing pages regardless of whether or not they’re advertisers.

Agents who fill out a Zillow profile, which the company says is free and takes minutes to do, appear at the top of the list of buyer’s agents with a “listing agent” designation.

In this way, “every listing agent can appear at the top of all their listings,” said Zillow’s Nowak.

Agents who haven’t filled out a Zillow profile and provided an email address, however, and don’t advertise or aren’t affiliated with a brokerage that’s negotiated a deal with the portal, don’t have their name or broker listed near the top of the listing page. 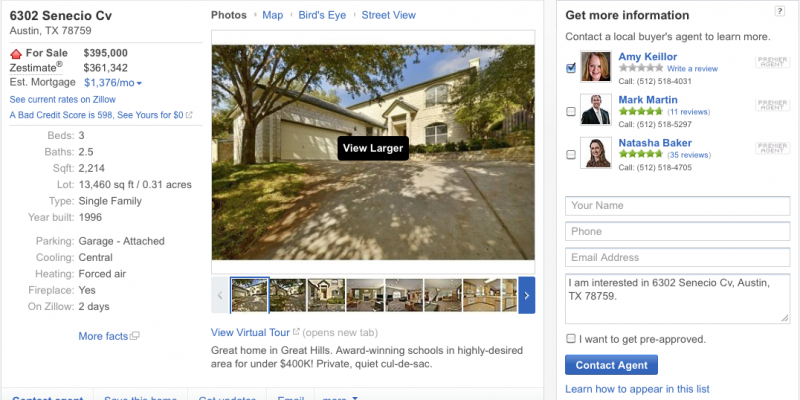 Screen shot of a listing page on Zillow of an unadvertised, unenhanced listing.

Neither do the “contact agent” buttons below the main listing photo and below the advertising column to the right of the main photo on the listing page direct consumers to the listing agent, but to a competing agent or broker who advertises with the portal.

Screen shot of a listing page on Trulia of an unadvertised, unenhanced listing.

No stampede for exit, yet

“While there hasn’t been a stampede for the exit on syndication, I’ve heard that several more jumbo brokers are considering this move,” wrote Gregg Larson, CEO and president of real estate consulting firm Clareity Consulting, in a blog post about the Nothnagle Realtors’ decision to stop syndicating to the large sites.

If more large brokers follow Nothnagle Realtors and Edina Realty’s lead, Larson noted, Zillow and Trulia — which are both publicly traded companies — could have issues with Wall Street.

Both companies have listed their reliance on listings from other sources as key risk factors in their S-1 statements with the U.S. Securities and Exchange Commission.

“Our ability to attract users to our website and mobile applications depends to some degree on providing a robust number of for-sale and rental listings,” read a portion of Zillow’s “Risk Factors” section in its registration statement.

Trulia pointed out a similar risk in its filing papers. “Many of our agreements with our listing sources are short-term agreements that may be terminated with limited or no notice,” a section of Trulia’s registration statement read. “If our relationship with one or more of these parties is disrupted, the quality of the experience we provide to users would suffer.”

The National Association of Realtors has developed a checklist for brokers to consider when deciding where to syndicate their listings, prompting them to answer questions like:

The second-largest real estate syndication platform, Point2 Technologies, which syndicates listings to Zillow and Trulia and 50-plus other publishers, recently announced a new listing distribution policy that goes into effect on Jan. 1, 2013, that includes restrictions aimed at mollifying brokers and other listing providers such as Realtor associations and multiple listing services.

Point2 competitor ListHub, owned by Realtor.com operator Move Inc., has made similar moves to give brokers more control of their data. For example, in response to broker concerns about data use, in August ListHub prohibited listings it syndicated from showing up on Trulia’s agent-branded mobile apps.

Editor’s note: This story has been updated to clarify that Nothnagle Realtors says it has decided not to syndicate its listings to some third-party sites including Zillow and Trulia. The brokerage was not providing a direct listing feed to those sites — one method third-party sites use to improve accuracy. The story has also been corrected to note that an offering of Zillow shares that closed Sept. 24 was a follow-on offering dilutive to existing shareholders, not a secondary offering of previously issued shares.