The nation’s largest real estate brokerage is warning agents who work out of more than 200 offices in the northeastern U.S. not to commission drone photography from vendors until the Federal Aviation Administration issues “clearly defined rules” governing the commercial operation of drones.

Until that happens, Realogy subsidiary NRT LLC says it won’t even process or distribute images captured by drones that are provided to it by sales associates in the affected regions.

The warning — sent by NRT LLC attorneys to presidents and the marketing team of NRT’s Eastern Seaboard and Northeast regions — was obtained by Forbes contributor Gregory McNeal, who covers law and policy for the publication.

In the July 1 memo, NRT attorneys Mark Daaleman and Bob McCauley warned that even though the FAA is still in the process of drafting rules that will govern commercial drone operators, it “has issued fines and penalties” to people operating drones for commercial purposes or in restricted airspace, and “continues to take an aggressive stance regarding the use of drones specifically for real estate marketing” purposes.

Last month the FAA warned real estate agents who fly their own drones to take pictures or videos of listings that they are not engaged in a “hobby or recreation,” meaning that regulators could attempt to take enforcement actions against them. Although the FAA has issued numerous cease-and-desist letters to alleged commercial drone operators, its ability to collect fines against them should it pursue enforcement actions against them remains a matter of dispute.

In March, an administrative judge dismissed the only case in which the FAA has attempted to fine a drone operator, saying the policy notices regulators had previously issued governing commercial operation of drones were not produced through a formal rule-making process. The FAA has appealed that decision, and maintains that commercial drone operators “are subject to all existing FAA regulations” while the new rules for drones are being finalized.

Until the FAA issues clearly defined rules governing the commercial operation of drones, the NRT attorneys said, “our companies in the Northeast and Eastern Seaboard regions will not be procuring drone photography from any vendor, nor will we process and distribute any drone photography provided to the company by an affiliated sales associate.”

Daaleman and McCauley said they “strongly advise” sales associates “not to seek drone photography on their own” because they “may be held responsible for all fines, penalties, costs and fees related to the use of that photography.”

It’s unclear whether NRT issued similar warnings to other regions. The Northeast region may be of particular concern because the FHA recently subpoenaed at least one brokerage with offices in New York City for information about how the company, which is not affiliated with Realogy or NRT, uses drones for marketing.

NRT spokeswoman Kathy Burruso declined to comment on the memo, saying, “We’re just trying to point people towards the NAR website for its guidance on this.”

NAR has advised Realtors against using drones for real estate marketing until the FAA issues further guidance or regulations.

Telling real estate agents to stop flying drones as part of their work, is one thing, but NRT’s decision to also reject drone footage submitted by agents “is a troubling development in an ongoing saga over the FAA’s rules which punish the safe commercial use of drones,” McNeal said in reporting on the memo for Forbes.

NRT “is a big player in this space,” he said, and its decision to prohibit the use of drone footage “will have a chilling impact on thousands of Realtors, and may set back efforts to convince the FAA to allow the safe use of drones for commercial filming.”

Broker hands drone to new hire, says learn how to use it 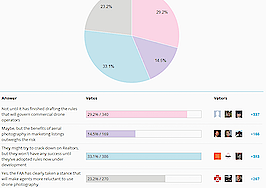 Brokers continue to invest time, money in drones
Back to top
Only 3 days left to register for Inman Connect Las Vegas before prices go up! Don't miss the premier event for real estate pros.Register Now ×
Limited Time Offer: Get 1 year of Inman Select for $199SUBSCRIBE×
Inmanpot
Log in
If you created your account with Google or Facebook
Don't have an account?
Create an Account
Forgot your password?
No Problem