by Joseph Ferrara
You successfully shared the article.
Close

His name is Robert Bolar. He is a Realtor for Coldwell Banker in Ogden, Utah. Robert’s been a regular top producer, working the upscale part of town. This year he is in the top 4 percent of all Coldwell Banker agents nationwide. Yeah, big deal, Joe, so what?

Robert does this without an office. Well, not a traditional office. His office is his car. Yep. His Toyota Prius is tricked out — not with fat tires and fuzzy dice but with technology that lets him do business as a real estate agent faster than the competition.

His name is Robert Bolar. He is a Realtor for Coldwell Banker in Ogden, Utah. Robert’s been a regular top producer, working the upscale part of town. This year he is in the top 4 percent of all Coldwell Banker agents nationwide. Yeah, big deal, Joe, so what?

Robert does this without an office. Well, not a traditional office. His office is his car. Yep. His Toyota Prius is tricked out — not with fat tires and fuzzy dice but with technology that lets him do business as a real estate agent faster than the competition.

He can search, send information and documents to his clients, and even get contracts signed and delivered, all without leaving his car. Heck, he can zip over to the local drive-through for a burger and fries while his client gets a whopper of a deal. (No word on what else Bob can do in his rolling office).

Robert has taken the traditional brick-and-mortar real estate model and converted it into a high-tech, ultra-portable office on wheels. Talk about mobile real estate. How does he do it?

Let’s say Robert is representing an out-of-town buyer. He’ll use his laptop with Wi-Fi card to search the multiple listing service for a property he thinks might fit his client’s needs. He’ll e-mail or fax them to his client and call the client using his cell phone.

He’ll get permission to view a home the client likes, power up his GPS to locate the home, whip out his camera to shoot some video or still photographs as he walks the property, and stream the video to his client or the Web (YouTube).

He can fax, print, sign, seal and deliver a client offer from his car. He said he loves the ability to quickly close a deal when a client falls in love with a home from the front seat.

I asked Robert what his clients say when they experience his "Robo-office." He said the reaction is typically, "Wow!" He shared a story about a client he picked up at the airport. They viewed homes, found a winner, faxed an offer, and signed a contract before driving the client back to the airport. Zowie.

You might think this way of doing business is too cutting-edge, though it’s already 6 years old — that’s when he created his mobile office. When I asked him where he got the idea, Robert told me it was when he saw a state trooper’s computer mounted to the dash.

He poked his head in to read the mount maker’s name and contacted the company for one of his own. He was on his way.

I asked Robert for a list of his essential mobile tech tools:

2. Wireless Internet Access: High-speed 3G Verizon air card and Cradle Point router. He said he will be switching to the new Verizon MiFi.

4. Scanner: Fujitsu ScanSnap scanner. He can scan any documents (fliers, offers, contracts) and send them to the client via e-mail or FAX.

5. Fax: Toll-free fax number from MyFax.com turns all of his faxes into PDFs.

6. Desk Mount: Jotto Desk is a computer car mount (just like the state troopers use). It allows easy access to his laptop and MLS listings from the front seat. It’s mounted between the driver and passenger seat on a swivel that lets either party surf the Net.

7. GPS: A portable Garvin Nuvi 260 GPS, with a battery life of four-plus hours.

8. Smart Phone: Blackberry 8830 and the new iPhone 3GS. He also keeps a cell phone available for client use, even though they may have one. It just shows he’s got everything covered.

9. Power: Car outlets and a solar-powered battery back (Xantrex XPower Powerpack) that charges a main battery for an extended period of time: six hours. He also carries a spare battery.

Oh, there are a few other things on Robert’s list, including a cooler. (No, it’s not some high-tech gizmo. It’s an old-fashioned insulated cooler to hold cold drinks and snacks for any client he’s rolling with — he tries to find out what his client likes to drink or eat so he can pre-stock it with client preferences).

He also carries an air-compressor and JNC 660 jump-starter to help folks stranded on the road. He says the jump-starter also makes a great backup power source if he needs it for any of his devices. 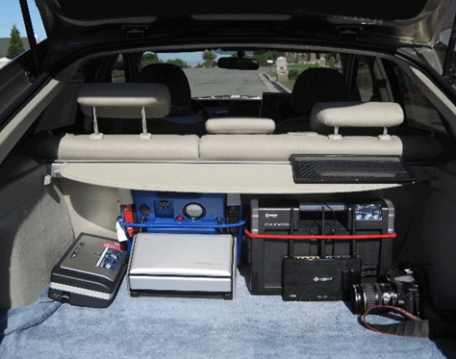 Wonder how Robert advertises when he’s traveling? Yep, the car again. His rear windshield and his license plate advertise his Web site address.

When I asked Robert what he wanted for the future, he replied, "Cars with all this technology already built in, especially a WAN/LAN antenna."

Robert teaches his "warrior" skills to local agents, but he said he hasn’t heard of any who have picked up his high-tech torch.

Joseph Ferrara is publisher of the Sellsius Real Estate Blog and a partner in TheClozing.com, a real estate news aggregator site. He is an attorney with 25 years of experience in New York, and he also coaches agents on the use of blogging and social networking.