In the beginning, it seemed so simple: Real estate agent working with local homebuilder decides to tackle an "Extreme Makeover"-type home-renovation project for a deserving local family — an elderly woman living with two children whose home was in terrible shape.

"I wanted to do something that would get the builder some attention," said the agent, Greg Adamson of Lehi, Utah. "It was a little self-serving."

Two intense weeks later, with volunteers fueled by $80,000 in donated labor and materials, the family was living in a fully renovated home.

In the beginning, it seemed so simple: Real estate agent working with local homebuilder decides to tackle an "Extreme Makeover"-type home-renovation project for a deserving local family — an elderly woman living with two children whose home was in terrible shape.

"I wanted to do something that would get the builder some attention," said the agent, Greg Adamson of Lehi, Utah. "It was a little self-serving."

Two intense weeks later, with volunteers fueled by $80,000 in donated labor and materials, the family was living in a fully renovated home.

The project turned into a calling for Adamson and a cadre of volunteers, who turned a feel-good — and admittedly promotional — lark into a full-fledged charity. Since that first project in 2004, the group that turned into Heart2Home Foundation has taken in $2.5 million in cash and donations of labor and materials and has tackled a dozen makeovers in Utah.

And the endeavor certainly got the attention it originally sought: People magazine came calling, as did the "Good Morning America" television program. In November, Adamson was one of five recipients of Realtor Magazine’s Good Neighbor Awards.

In the course of building the charity, Adamson and his co-founders have been contacted repeatedly by others, and particularly real estate agents, who are seeking to replicate Heart2Homes’ success in their own communities.

"We’ve heard from people who say they’ve thought about this a long time and they’re asking what steps they have to take," said Adamson, an agent with Prudential Utah Real Estate.

The realty community is a natural for this type of philanthropy, Adamson says.

For one thing, the independent-contractor nature of the business implies a certain amount of scheduling flexibility.

"And Realtors are can-do people," he said. "We’re in a business that’s sink or swim. Realtors who make it in this business are people who know how to get things done."

Not that it was a connect-the-dots endeavor at the beginning.

"We thought, ‘We had fun on this first (renovation), maybe we should try another one,’ " Adamson said.

So the group took on the needs of a family of 20 whose house had been damaged by fire. …CONTINUED

"They had adopted 16 children from around the world who had health or medical disabilities," he said. "They couldn’t move back in. We couldn’t say no."

So, Adamson and other volunteers began working with a local bank that offered them a cash donation. But that was where the learning curve turned steep, he said.

"The bank said, well, we need to see your 501(c)(3) paperwork," he said, referring to documentation of the group’s not-for-profit status. "We had never even heard of that before.

"That’s when we realized we’d need to take it to the next step, to take it to nonprofit status," and formalize the structure of the group, he said. "There are a million steps along the way. If we’d known what we were getting into it might have scared us a little more."

Although the group raises funds through one black-tie dinner each year and does accept some corporate funding, Heart2Home operates predominantly on donated labor and materials, primarily from the local building community. 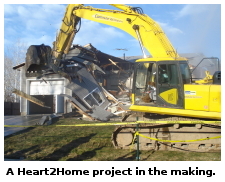 The downturn in homebuilding has changed the nature of the builders’ involvement, though not its intensity, he said.

"When things were good, builders had no time but lots of money," he said. "Now, there’s less money and supplies and more time from laborers."

All of the work is on a volunteer basis, he said. Although the group has taken on two from-the-ground-up home renovations, the rest have varied widely in scope. Projects have brought out anywhere from 300 to 2,000 volunteers, he said.

"We did one for a man who had terminal cancer. We went in and finished his ‘honey-do’ list" of home-maintenance tasks, said Adamson.

"These were things that had been neglected because of his illness. We didn’t want the home to weigh on them while he was dying."

In another effort, the group helped to renovate the home of one of the survivors of a 2007 shooting rampage that killed five people at a Salt Lake City mall, in order to make it wheelchair-accessible.

Heart2Home also worked with United Partners for Health to refurbish a 31-foot trailer into a mobile medical unit that visits low-income areas in Utah to provide health care for as many as 200 people a day.

He said Heart2Home is willing to tackle considerably smaller projects: Its next effort will be at a Utah women’s prison.

"It’s in the section of the prison for the mentally ill," he said. "A lot of these women are suicidal."

The mission: simply to paint some colorful murals and accent walls.

"They have a paint called ‘Prison White.’ Every room is drab," he said. "A counselor there told us that if you’re in a cell 24 hours a day, color can help change your outlook.

"The prisoners there will take something as simple as an M&Ms wrapper and put it on the walls of their cells because it gives them color and dimension," he said.

Adamson said that before Heart2Home he’d done community volunteer work, though nothing as intense.

He said the connection to a housing-related charity touched a nerve with him because of his career in real estate.

"I could see that home was the American Dream but it was also a nightmare for some people," he said. "(Owning a house) could tie up some families and there was nothing they could do to get out of it themselves."

Adamson said that in a week in which Heart2Home has no building projects under way, he averages five hours a week of involvement in the group.

"The funny thing is, after these projects I’m more busy (in real estate) than I was before," said Adamson. "I’m a believer in the law of karma. It’s happened enough times that I have a strong belief that you get back what you give."