That is, of course, unless you want people to laugh at them. Lorimer is the creator and overseer of LovelyListing.com, a two-year-old daily compendium of strange or aggressively ugly homes for sale, culled from multiple listing services by real estate agents around the world.

And each photo usually is accompanied by a deadpan remark, usually from Lorimer, who says she’s been smarting off all her life.

That is, of course, unless you want people to laugh at them. Lorimer is the creator and overseer of LovelyListing.com, a two-year-old daily compendium of strange or aggressively ugly homes for sale, culled from multiple listing services by real estate agents around the world.

And each photo usually is accompanied by a deadpan remark, usually from Lorimer, who says she’s been smarting off all her life.

"I remember my math teacher, I must have been in seventh grade, saying my mouth would get me into trouble one day," recalls Lorimer, who says it runs in the family. "My parents are funny people — they were ‘Monty Python’ fans and they raised me that way."

Lorimer’s mouth, instead, got her into a burgeoning online empire. Last year LovelyListing was acquired by Cheezburger Network, the parent company of 34 humor-oriented sites, the most well-known being ICanHazCheezburger.com, an endless collection of LOL (laugh out loud) cat pictures accompanied by captions with fractured grammar and spelling.

Cheezburger Network doesn’t release data on the individual sites, but says that overall, the 34 sites get 13 million unique users and 230 million page views a month. More than 10,000 photos and videos are submitted to the sites each day.

The real estate photos at LovelyListing.com represent a small but nonetheless devoted segment of that total, Lorimer says. She’s unsure how many photo submissions pour in for her own blog because Cheezburger staffers now manage the photos; early on, she got about 20 a day, though suspects now that there are probably 100.

And what an … interesting … assortment they are. Straight from the listing agent’s camera, photographed for your homebuying pleasure, one can survey bedrooms strewn with underwear, houses roped off with crime-scene tape, cats drinking from bathroom faucets, boxes of rat poison prominently displayed in a laundry room. There are rooms slathered in colors not found in nature; rooms that contain enormous pink pig sculptures; rooms with carpeting on the floors, walls and ceiling; and rooms that contain the actual homeowner, unshaven and glaring back at the camera. 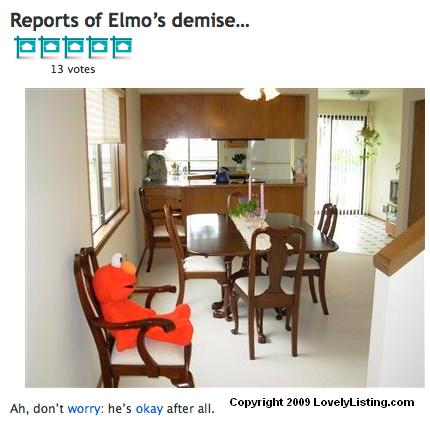 "One of my favorites is a kitchen where somebody Photoshopped a giant Labrador Retriever head peering in through a sliding patio door," says Lorimer, who swears that’s exactly how the room appeared in an MLS.

She’s often perplexed at how "unstaged," to put it mildly, some home photography in MLSs is. A growing category, she says, is MLS photos of bathrooms with unflushed toilets: "I’ve stopped posting those, because what more can I say?"

And then there’s Chair.

Chair is hard to explain, except that he/she/it ("I have no opinion on what gender it is," she says) has become a running gag on the site.

Chair is one form or another of the white, molded-plastic yard furniture that has become a mainstay of American patios. And, apparently, of MLS photography.

"I just started noticing these white plastic chairs showing up in listings — they were everywhere," Lorimer said. "I personally hate these chairs. They’re hideous."

Nonetheless, Chair has become something of a LovelyListing star and has its own showcase on the site, though Lorimer has bent the rules to include non-MLS sightings of Chair. …CONTINUED

Lorimer is not now nor has she ever been a real estate agent. Nor did she set out to be a real estate, er, critic. A stay-at-home-mom who lives in a Seattle suburb, she has a master’s degree in fine art from Columbia University and worked an assortment of jobs, including fact-checker at a number of national magazines. Several years ago she wrote two books — one on female pirates, the other on pregnancy tips — neither of which sold terribly well, she said.

About two years ago, she was looking for remodeling ideas when she found herself browsing the listings on Redfin.com.

"I kept finding these funny photos, and I couldn’t figure out why anybody would include them in a listing for sale," she said. She started e-mailing them to a friend.

"But I didn’t want to be that person who e-mails you funny e-mails at work, so I thought, I’ll put them on a Web site," which she initially called It’sLovelyI’llTakeIt.com.

Her daily postings quietly built a following. Last August, Cheezburger Network called and asked to chat, and subsequently Lorimer sold the site, though she stayed on as editor. The Cheezburger staff now handles all the technical aspects of the blog management and culls out candidate photos, but Lorimer makes the final call on which photos are featured, she said.

A primary source of photos is agents themselves, and though their profession indirectly has become the object of endless ribbing on the site, they don’t seem to object, Lorimer said.

"I’ve heard from homeowners once or twice, but no one has ever complained or sent me an e-mail saying, ‘Take my picture down,’ " she said.

The agents, though, are clear that they don’t want to be credited as sources, Lorimer says. "They always say, just use my first name."

She’s aware of the site’s surprisingly growing popularity, she said. A book of great moments in LovelyListing.com history is in the talking stages, she says.

In November, the producers of "Nightline" devoted a segment to the site, interspersed with comments by real estate phenom Barbara Corcoran, who explained, hey, folks, your photos may be keeping your house from being sold.

But Lorimer didn’t appear in the segment; she said she was freaked out at the prospect of being on national TV, and nominated Cheezburger CEO Ben Huh to appear, instead.

She’s just not that big on explaining to people about her part-time gig, she says.

"In the circles that I run in right now, the preschool circles and the PTA circles, they’re not humor-blogger circles," Lorimer said.

"People ask me what I do; I say I have a Web site making fun of photos from real estate listings," she shrugs. "It doesn’t make any sense, but it is what it is."