It seems that every movie I watch these days has a character typing away on a shiny new MacBook Pro or a protagonist connecting the dots of a mystery with a Google search. The small screen has embraced technology as well.

Just try and watch a television show that doesn’t mention a social networking site. As a matter of fact, the popular Twitter account, "S— My Dad Says" has been developed into a sitcom by CBS starring William Shatner.

It seems that every movie I watch these days has a character typing away on a shiny new MacBook Pro or a protagonist connecting the dots of a mystery with a Google search. The small screen has embraced technology as well.

Just try and watch a television show that doesn’t mention a social networking site. As a matter of fact, the popular Twitter account, "S— My Dad Says" has been developed into a sitcom by CBS starring William Shatner.

I have even seen Steve Wozniak, the co-founder of Apple, make a guest appearance on an episode of "The Big Bang Theory"!

Times have certainly changed. Pocket protectors and calculator watches have been replaced with Kindles and iPads. Technology is mainstream and has been embraced by popular culture. In other words, it’s chic to be geek.

This trend of technology adaptation has created some very tech-savvy consumers. Today, consumers are educated and well-informed.

Websites such as Lifehacker provide detailed articles covering Mac, Windows and Linux applications. The site is filled with helpful tips and tutorials.

Consumers are streaming movies from Netflix; exporting video from digital video recorders; creating slideshows of their family vacations and uploading them to Facebook. Once considered daunting, "tech" tasks have now become second nature.

There has also been a huge surge of new smart phones in 2010 and Gartner Inc. recently reported that smart phones accounted for 19.3 percent of overall mobile phone sales during the third quarter of this year.

Consumers are taking full advantage of the mobile platform by installing apps, tethering and even "jailbreaking" their devices (the process of unlocking a device, allowing a user to install many other applications and extensions). Consumers are learning and incorporating technology more than ever before.

The answer may be … yes. Real estate agents certainly face a difficult challenge. They have to balance customers with many different proficiencies on the technology curve.

I see it every day in my office: Sales associates have some clients who prefer to communicate via text message while others are tied to their iPhones and expect instant responses via e-mail.

What if you have a client who requires an electronic signature and you’ve only heard wild rumors that such a service existed?

Consumers expect real estate professionals to communicate on their level utilizing similar tools. Cultural changes and learning curves can be very difficult to navigate, especially in the sales industry.

However, understanding the technology usage and adaptation of your customers is an advantage that can be leveraged.

I find consumer behavior and the adoption of technology extremely interesting. In Bill Tancer’s book, "Click: What millions of people are doing online and why it matters"; he applies Everett Rogers’ "Diffusion of Innovations" theory to the rise of YouTube becoming a market leader. Tancer is general manager of global research for Web metrics firm Hitwise.

Everett Rogers was a sociologist who developed a model that classifies adopters of innovation into various categories.

The adopters can be categorized into five groups: 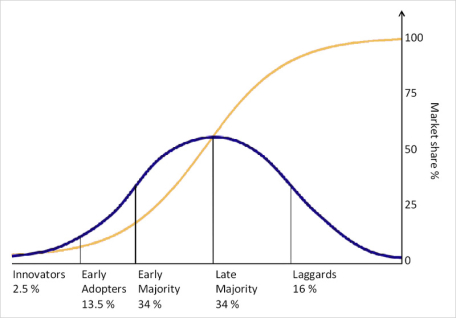 The "Diffusion of Innovations" theory is widely accepted, and the concept has been applied across many different industry studies. Tancer writes that the Internet "is prone to hyper-innovation" and a site such as YouTube can "rise from being a relative unknown, still in its early phases of testing, to suddenly, within only a few weeks, overtaking the established players in a specific category and becoming a market leader."

What can agents learn about the technology adaptation of consumers?

The adaption of technology moves incredibly fast! Real estate professionals should be conscious of the products and services that their customers are utilizing.

You do not have to be a market analyst or a technology director to formulate a strategy.

1. Analyze your websites metrics to learn what platforms and devices your customers are utilizing. This is valuable data and will help you make educated decisions regarding content and what technologies to incorporate.

2. Subscribe to a reliable technology and marketing publication for the latest industry news. Besides Inman News, here are a few popular resources: Mashable (Note: Adam Hirsch, Chief Operations Officer at Mashable will be a featured speaker at Inman Connect in January), TechCrunch and Engadget.

3. If you are using technology that your customers are not — ditch it!!

By understanding your customers and the technology that they use, you will be able to maximize your services and operate more efficiently.