Zillow.com has launched a ratings tool that allows consumers to evaluate agents they’ve worked with in the past — but only if the agent and client have both activated profiles on the site.

Although Zillow is touting its agent ratings system as "an incredibly useful tool for consumers," it’s also been carefully designed not to provoke agents.

Zillow says it will vet each review before it’s published, and that it expects most of the ratings will be generated by agents soliciting their past clients for feedback.

Agents will be notified when a review has been written about them, and have the opportunity to respond, or flag reviews they think are inaccurate or unfair, for further action by Zillow moderators.

Zillow has been taking public feedback on lenders since 2008, and has gained considerable expertise in preventing spamming, gaming and malicious use of that system, said Zillow CEO Spencer Rascoff.

Consumers have submitted 6,500 ratings and reviews of mortgage lenders, and Zillow’s research shows that the highest-rated lenders are contacted nearly twice as often by consumers as those with lower ratings, Rascoff said.

Although Zillow sells advertising to real estate agents, there is no charge to create a profile or solicit past clients for ratings, the company said. About 292,000 agents have activated a profile on Zillow.

Rascoff said consumers are Zillow’s "north star," guiding decisions on what to offer on the site, and that the agent ratings will also benefit agents and the company.

"We look at this as differentiated content," Rascoff said. "We are in an industry where most websites have pretty much the same info — listings on a map."

From the beginning, he said, Zillow has tried to differentiate itself, offering property value "zestimates," price-change history for listings, property data, neighborhood information, and a forum where consumers can solicit agents for advice.

The new rating system allows registered Zillow users to rate an agent who has represented them in the past — they can’t rate the agent on the other side of the transaction — assigning one to five stars based on how likely the users are to recommend an agent to others.

Clients can also choose to describe, in detail, their experience with the agent.

For verification, Zillow asks for the street address of the property involved, which is not published with the review.

Before submitting their ratings, users must check a box promising that the review "is honest and respectful."

"I love this idea," Springfield, Mo.-based Realtor Stacey Clem told Inman News."It will be very nice to see what clients have to say about their experience with their agents. Maybe it will make agents a little more accountable."

Agents were also largely positive in commenting on a post by Zillow’s Sara Bonert at ActiveRain.com announcing the new service.

Some questioned whether the system could be gamed, and whether agents would be able to generate a meaningful number of reviews.

HAR’s rating system has been "extremely well received" by both members and consumers, said Margie Dorrance, the chairwoman of the association’s board of directors.

"It’s a natural evolution for real estate information providers like Zillow to enable consumers to evaluate Realtor performance, and we think the move benefits the entire industry," Dorrance said in a statement.

But HAR met with resistance from members when it rolled out a map-based tool for consumers that allowed them to see which agents had the most transactions and listings in a particular ZIP code or neighborhood.

After launching the "Realtor Match" tool in April, the Association was besieged with angry calls from members, and stopped directing consumers to the tool from its public-facing website, HAR.com.

Consumers in many major metro markets can evaluate agents based on their past transaction history at NeighborCity.com, an online brokerage and property-search site owned and operated by American Home Realty Network.

NeighborCity plugs transaction data from local MLSs into an algorithm that rank agents based on their transaction history and number of active listings. NeighborCity matches the property type and price range of homes agents typically work with to users’ search criteria.

Without that context — price, property type and location — NeighborCity CEO Jonathan Cardella said, the ratings an agent has received from past clients may be meaningless. That’s especially true if the consumer is looking for a home that’s outside that agents’ area of expertise, he said.

An agent who specializes in $500,000 condos in San Francisco’s South of Market neighborhood may not be the best person to represent a buyer looking for a $2 million home in the city’s wealthy Presidio (Heights) neighborhood, Cardella said — even if she has all five star ratings from past clients.

Rascoff said that while Zillow doesn’t automatically display an agent’s past transactions, some agents have chosen to provide information about past transactions on their profile page. Zillow’s agent profiles also show the number of listings the agent is handling and the asking prices, he said, which can help consumers pick the appropriate agent.

Cardella maintains that subjective rating systems like Yelp.com may work for restaurants and other services, but are ill-suited for real estate.

He said, "When you are looking for a real estate agent, what’s great for you is not necessarily great for someone else."

And Yelp and other ratings sites are plagued by the problem of self-selection, Cardella said, because "only people with great things or terrible things to say" will bother to submit reviews.

Yelp has also been accused of using its ability to get rid of or diminish the prominence of negative reviews in order to sell advertising to businesses that are rated on the site, though the company has denied those accusations.

Rascoff said Zillow is "very familiar" with issues that have been raised about Yelp’s business model, and consumer ratings in general. He said Zillow has adopted some of Yelp’s best practices, including spam and fraud prevention, and added the additional safeguard of separating the customer care department that handles the administration of reviews from the advertising sales department.

"Sales does not have the ability to affect what reviews get displayed," Rascoff said. "That was a deliberate decision."

While Yelp will sometimes view a sudden onslaught of reviews as suspicious — an indication that a business owner is trying to game the system — Zillow is encouraging agents to get feedback from past clients "en masse," Rascoff said.

Agents can submit up to 50 e-mail addresses at a time to Zillow, which will send out the requests for feedback to an agent’s past clients. Past clients can also initiate a rating by clicking on an agent’s Zillow profile.

As for any doubts that Zillow can serve the interests of both consumers and agents in moderating disputes over ratings, Rascoff said that it can be in an agent’s best interests to respond to criticism, rather than simply seeking to banish it.

"What we found on the mortgage side is it’s more believable to consumers … when there are, say, 20 reviews — 17 that are phenomenal, and three that are mixed," Rascoff said. "On those three, the lender comes back with a great response. That interaction presents a more believable picture of that lender’s performance." 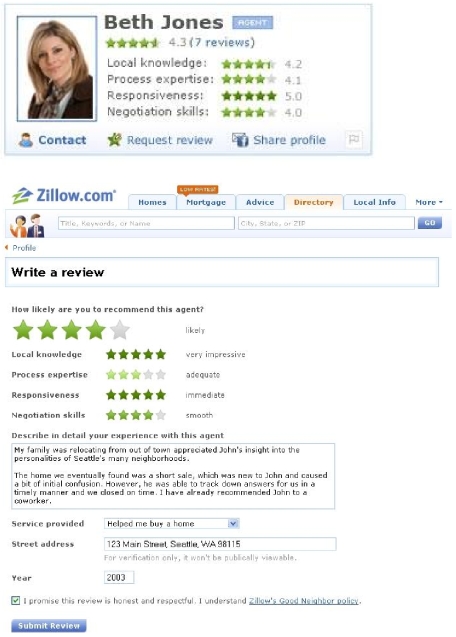