by The Real Deal |
You successfully shared the article.
Close 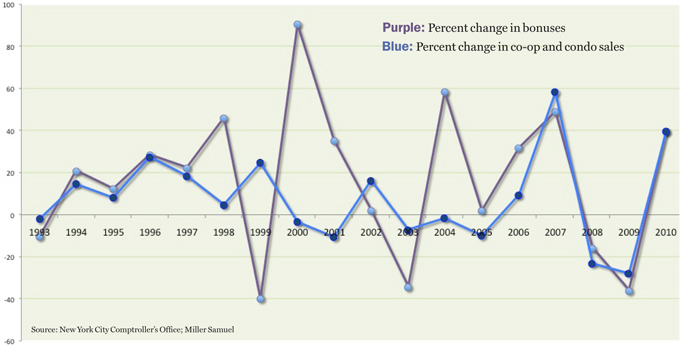 Editor’s note: This article is reposted with permission by The Real Deal. View the original article.

The Real Deal tracked the year-over-year percent change in Wall Street bonuses and Manhattan condo and co-op transactions going back to 1993, using data provided by the city comptroller and appraiser Jonathan Miller, respectively.

Besides the volatile period between 1998 and 2005, the leaps and plunges in annual transactions were in lockstep with the bonuses showered on Wall Street at the beginning of that year.

For example, at the start of this year bonuses shot up 39.5 percent to $25.4 billion. Meanwhile, the number of co-ops and condos sold in Manhattan is on track to increase a near-exact 39.3 percent to 10,353 by the end of the year.

Given this correlation, transactions will likely drop at least nominally at the beginning of 2011, as "the amount of funds set aside for compensation, including bonuses, has declined during 2010 as revenues and profits have trended downward," said state Comptroller Thomas DiNapoli in a report issued last month. "There’s only so many sales you can push with greater compensation."

Miller also noted that with the post-Lehman trend of more bonus compensation given in the form of restricted stock or options, as opposed to cash, "its impact on sales activity will likely be less pronounced in the future."

He added: "When you consider that bonus compensation is somewhere in the neighborhood of half of total compensation, that’s a significant factor in determining whether people are going to run out and buy after they get a bonus."

Plus, as firms continue to cut staff, the pool of employees divvying up that coveted cash will be smaller.

But the upcoming bonus numbers are nothing to panic over. DiNapoli said this year is still on track to be Wall Street’s fourth-most profitable ever in absolute dollars, and the number of transactions this year was the second highest in two decades.

Real estate players said the correlation is due to the sheer percentage of prospective buyers in the city who are affected by the fortunes of Wall Street — an estimated one out of every seven jobs directly or indirectly — and the fact that real estate is again being looked at as a secure investment.

Prudential Douglas Elliman executive vice president Frances Katzen, who estimates that 40 percent of her buyers are investors, mostly from the financial industry, said "people who are not comfortable with the volatility in the stock market are going to want to put [their bonuses] into property at this time."

Prices in many buildings have fallen sufficiently to make buying and renting out an apartment profitable over a 10-year period, given that the buyer has a sizable downpayment, Katzen said.

"We are now seeing that the one-bedroom or studio investors are guys who work in finance who want to do something with their money," she said.

The same holds true for the top tier of the Manhattan real estate market. Katzen said one of her clients is a foreign financier looking to spend some $15 million in cash on an apartment. And Gary Malin, president of Citi Habitats, said his firm just sold a $3.1 million penthouse at Chelsea’s Prima to someone who works on Wall Street.

"Eighty percent of the people who looked at that penthouse work on Wall Street," said Malin. Overall, he said, financiers account for more than a quarter of his clients.