Jerry Matthews has never shied away from contemplating the "what ifs" that keep Realtor association executives awake at night.

In 1989, when Matthews was CEO of the Florida Association of Realtors, he produced a video that explored some dramatic changes he thought might play out in real estate over the next 20 years.

The video asked its audience to consider what would happen if Realtor associations lost their control over multiple listings services (MLSs).

It also considered what the implications would be if the "three way agreement" — ties that bind the National Association of Realtors to state and local associations, requiring members to pay dues to all three — was declared invalid.

Matthews’ video, set 20 years in the future, envisioned a world in which NAR had "lost its monopoly" — not only as the sole provider of marketing tools such as the MLS, but also educational, legal and advocacy services for Realtors.

The video contemplated Realtor associations so "slow, bloated, bureaucratic, duplicative" and costly, as Matthew would later put it, that members rebel. In the video, NAR is forced to merge with "Landsel," a rival group that’s more focused on serving the trade association’s "true customer": the broker-owner.

Today, having weathered the disruptive technological threats posed by the Internet — not to mention the greatest housing downturn since the Great Depression — NAR and its state and local Realtor associations can still claim more than 1 million members. But membership is in decline, and Matthews continues to push association executives and boards to think ahead. 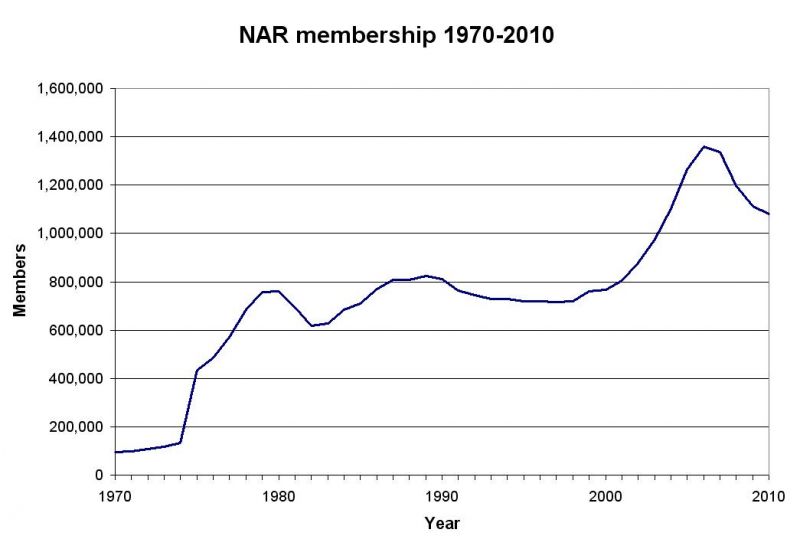 Now a consultant after 27 years as an executive with the Florida and Illinois Realtor associations, Matthews has been working with NAR on two initiatives aimed at helping associations stay relevant.

One program, dubbed "Transform," helps Realtor associations analyze current practices with an eye to becoming more efficient and valuable to their members.

The second program, "Unify," makes Matthews available to associations that have decided to merge, or are considering such a move.

As his role as the Unify program facilitator, Matthews has helped get the ball rolling in merger talks involving a total of seven Realtor associations now under way in two markets: Denver and western North Carolina.

Discussions in both markets are in the "due diligence" phase, with association boards resolving final details before taking final proposals to members for a vote.

Matthews also helped four Realtor associations in the Chicago market form an umbrella cooperative to speak with a combined political voice and better serve their 34,000 members.

NAR pays Matthews’ consulting fees, but Realtor associations pay his travel and other expenses — which gives them "skin in the game," he said.

"I funded Jerry Matthews to do three projects, and I bet those will go very well," Stinton said. "If they do, I think I’ll fund some more. He does it in a very productive way."

"Since I’m out in the trenches now (as a consultant), I promised Dale I would tell him about things I saw in the field," Matthews said.

"Last year, I told him I sensed more people are interested in a merger, but didn’t know how to pull it off. There are egos and emotions involved, and some of the bigger ones that would make a difference were not going to happen" without a facilitator.

"I only work with the willing," he said. "I’m the disinterested third party — I am here to help you go where you want to go, but if you don’t want to go there, that’s fine with me."

Getting off on the right foot

Mark Trenka, president of the Denver Board of Realtors, during merger talks when Matthews helped get them rolling last summer, said bringing a consultant in "was a nice move. Having access to (the Unify program) through NAR helped us get started on the process."

"We went to the table a couple of years ago with different players, and it didn’t go anywhere," Trenka said. "Jerry helped us get more people at the table to begin with, and also helped us at the proper time separate the organizations that wanted to stay and work through the process from the ones that weren’t going to be there at the end."

"Jerry is very good in the exploratory (stage)," agreed Lynda Hysong, president of the Brevard Board of Realtors — one of four boards exploring consolidation with Matthews’ help in North Carolina. "He raises the questions that we didn’t even know to raise."

There are "multiple pressures" on Realtor associations trying to go it alone, Matthews said.

"Just about everybody has had to adjust their budget, and look at what they are delivering in terms of services," Matthews said of state and local Realtor associations.

"Smart" Realtor associations are shifting their product mix to address the realities of the market, he said. Those that don’t are perceived as providing less value to members.

"You have outside pressures to where broker-owners are having to be more efficient — they are cutting overhead, and they are looking to associations to do the same thing," Matthews said.

The largest brokerage in the Columbia, S.C., metro area — Russell & Jeffcoat Real Estate Inc. — dropped its Realtor association membership this year, saying too many agents questioned the value of the services provided.

The multiple listing service in the Columbia market, Consolidated MLS, is independently operated by brokers and not Realtor-affiliated. That meant Russell & Jeffcoat could drop its Realtor affiliation without jeopardizing agents’ access to the MLS.

About 150 of the roughly 370 companies that belong to Consolidated MLS are not Realtor-affiliated.

Although there’s been no mass exodus from Realtor associations on the part of brokerages — the 4 percent overall decline in NAR membership during the past year is thought to be driven primarily by individual real estate agents leaving the profession — that door appears to be open.

"I’ve always thought our organization was vulnerable, and that there would be a point where a competing organization would be viable," Matthews said. "I talked about it back in the 1980s, but there was not enough external pressure."

Some would argue those pressures have increased — more MLSs are "open," meaning they accept non-Realtor members, and consumers have more information at their fingertips than ever, raising the bar for Realtors and their associations to demonstrate what they bring to the table.

Matthews acknowledges the threat: "What if everybody got up one morning and decided not to salute?"

Although he’s spent much of his career warning of just such a possibility, Matthews’ consulting work is aimed at preventing the coming of such a day.

Merger in the air

Matthews hasn’t been involved in all of those mergers — the forces driving Realtor association consolidation are powerful enough to produce results on their own.

Last year in Miami, an impasse over access to real estate listings data led to discussions between two Realtor associations and the creation of the largest regional association in the nation, the Miami Association Realtors, with more than 25,000 members.

In St. Paul, the St. Paul Area Association of Realtors (SPAAR) and the North Metro Realtors Association (NMRA) are finalizing a plan to become a single association, serving 6,600 members, by April 1.

Part of the incentive to consolidate is to lower costs by achieving greater efficiencies and economies of scale, Matthews said, speaking of mergers in general.

"On the other side you have (associations) saying, ‘This is our opportunity to be bigger and better,’ " he added.

"It mirrors what’s going on in the brokerage community, with companies looking to take advantage of the down cycle to look at acquisitions and make marketing adjustments and agreements."