A 2,500-acre mixed-use subdivision in Lewisville, Texas, is the backdrop of a full-length movie created by the developer, Dallas-based Bright Realty, Builder magazine reports.

"Cooper & the Castle Hills Gang," which cost $500,000 to produce, is a coming-of-age drama about an 11-year-old who lives in what he calls "the best neighborhood in the entire world."

As the boy tries to help a neighbor out of a bit of a jam, they set off on a journey through the 2,500-acre Castle Hills development and all its amenities.

The 51-minute film has been screened at the Dallas International Film Festival and for guests at Castle Hills. It’s online at castlehillsmovie.com.

A 2,500-acre mixed-use subdivision in Lewisville, Texas, is the backdrop of a full-length movie created by the developer, Dallas-based Bright Realty, Builder magazine reports.

"Cooper & the Castle Hills Gang," which cost $500,000 to produce, is a coming-of-age drama about an 11-year-old who lives in what he calls "the best neighborhood in the entire world."

As the boy tries to help a neighbor out of a bit of a jam, they set off on a journey through the 2,500-acre Castle Hills development and all its amenities.

The 51-minute film has been screened at the Dallas International Film Festival and for guests at Castle Hills. It’s online at castlehillsmovie.com. 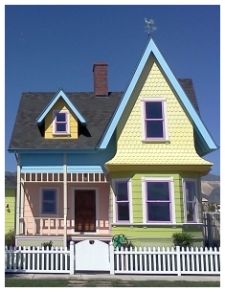 A homebuilding company in Utah knows a storybook cottage when it sees one. That’s why it is building a real-life version of the brightly colored house featured in the Disney Pixar animated film "Up."

KSL TV in Salt Lake City reports that Bangerter Homes in South Jordan, Utah, has created a 2,800-square-foot home that closely resembles the movie’s fictional house that was lifted into the sky by a bunch of helium balloons, along with its 78-year-old owner, and came to rest in a remote area in South America.

The builder says the company got permission from Disney to replicate the house from the 2009 film.

The house, which will be open for touring during the Salt Lake Parade of Homes July 29-Aug. 14, will sell for around $400,000 and will be outfitted with custom-made furniture as seen in the movie.

So what if your new house doesn’t look like a Disney prop? You could still consider living in Awesometown.

"Awesometown" is the new unofficial moniker for a 40-year-old subdivision where a new round of building and marketing has commenced after a multiyear break. The developers have built a marketing campaign about the current residents’ propensity for describing living there as "awesome."

Newhall Land was trying to figure out how to build new interest in the subdivision when it set up focus groups with the residents, who tended to use the word "awesome" in reference to the existing 20,000 homes already constructed in Valencia, Calif., a master-planned community about 30 miles from Los Angeles, according to Builder magazine.

The company’s print and billboard "Awesometown" campaign began last year, and it’s sticking, the company said. Local businesses have begun to describe themselves as being in Awesometown, according to the homebuilding trade journal, which said that even the local Whole Foods Market prints "Awesometown" on its receipts.

A stager’s best friend: It’s been said that if you want a friend in Washington, get a dog. Maybe the same advice goes if you want to sell your house. The newest home-staging trend is "placement pets," according to a recent report in AOL Real Estate. That is, adorable dogs and cats are increasingly showing up in home-listing photos in an effort to convey any number of subliminal messages, from "family home" to "building is pet-friendly."

Montecito, Calif., real estate agent Cam Gittler, for example, plopped down a Cavalier King Charles spaniel in a $4.9 million listing because the dog suggests royalty — and so does the house, according to AOL Real Estate.

Doo tell: Dog-owning residents of a condo complex in ritzy Jupiter, Fla., soon will have to pay a $200 fee to the DNA Pet World Registry to take and store the pet’s "genetic fingerprint." The Village of Abacoa, a 458-unit condo property, is getting tough with owners who don’t clean up after Fido.

Doggie droppings found in common areas will be mailed to the registry in Tennessee and matched with records from animals that reside in the complex. Get caught not minding your dog’s business, and you’ll be fined $1,000 by the condo board; don’t pay, and a lien may be placed on the home, according to the Palm Beach Post.

Dubious deeds in the name of religion

Real estate agents encountering squatters who have moved into vacant, foreclosed homes isn’t new, but lately some squatters have become creative in their efforts to proclaim legal dominion over the houses.

WBTV in Charlotte, N.C., says area courthouses are seeing a wave of deeds filed by people claiming the property on behalf of the Moorish Science Temple of America, a religious sect founded in the 1920s whose beliefs are loosely connected to Islam.

County officials described the deeds as fraudulent; news reports in other states have reported similar incidents by individuals claiming ownership on behalf of the religious group.

An island with a past

The former waterfront estate of Joseph Goebbels is being offered for sale and will be auctioned in August, but the house where the infamous Nazi propaganda minister lived is long gone, according to Reuters.

There’s no minimum bid on the 1.5-acre island property in Berlin, which contains a 7,640-square-foot ranch-style home built in the 1950s that was later rented by the Aspen Institute, a U.S. think tank. Goebbels’ home there was torn down after World War II and the property passed into the ownership of the city of Berlin.

The real estate firm handling the auction said it reserves the right to reject "inappropriate bidders," such as neo-Nazis infatuated with the memory of Goebbels.

The homebuilding industry got its own category, and received 2,928 complaints, ranking 56th. Real estate trailed far behind the No. 1 source of complaints — the cable and satellite television industry — which got 30,408 gripes. The mortgage industry placed 10th on the list.

A couple of years ago, an Australian lawyer caused an uproar by using Facebook to send a foreclosure notice — and the courts validated the practice. Since then, the practice of using the social media giant to serve otherwise-untraceable defaulters has spread to New Zealand, Canada and the United Kingdom, according to Bloomberg Businessweek, which says the U.S. may adopt the practice soon.