Despite heightened vigilance by financial institutions, mortgage fraud remained at elevated levels in 2010, and is attracting organized criminal groups drawn by the chance to rake in "high profits through illicit activity that poses a (relatively) low risk for discovery," the FBI says in a new report.

Most suspicious activity reports involve loans originated years ago. In its most recent report, FinCEN said 79 percent of the 24,485 suspected cases of mortgage fraud reported by lenders during the first quarter of this year involved activities that occurred more than three years ago.

The FBI is concentrating on more recent loan fraud, revealing that "the majority" of cases it opened last year involved criminal activity that occurred in 2009 or 2010.

The bureau said it has developed a technique it will use in the future to identify mortgage fraud schemes "using tactical analysis coupled with advanced statistical correlations and computer technologies."

Mortgage data aggregator CoreLogic has estimated that about $12 billion in loans were originated with fraudulent application data in 2010.

At the end of fiscal 2010, the U.S. Department of Housing and Urban Development’s Office of Inspector General also had 765 pending loan-fraud investigations involving mortgages on single-family homes, up 29 percent from the year before and up 70 percent from 2008. 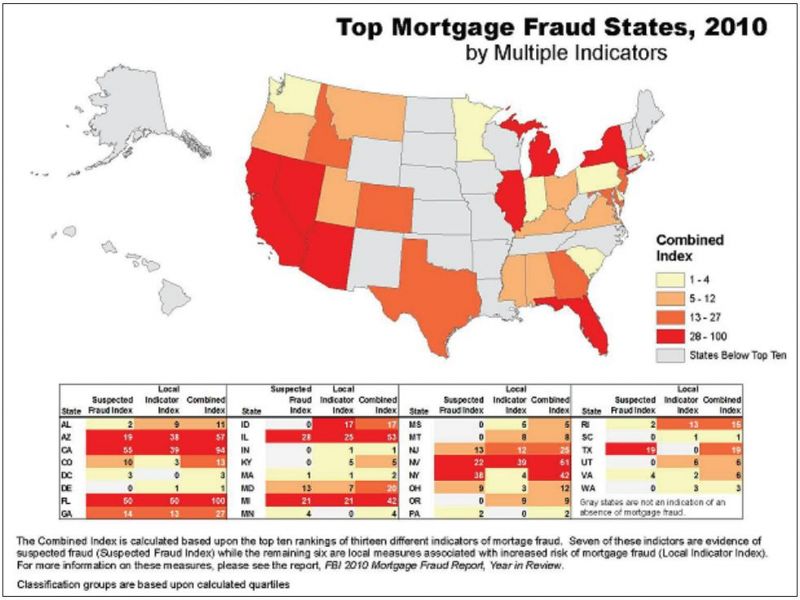 Citing a source with "good access" but whose reliability "cannot be determined," the FBI said Asian, Balkan, Armenian, La Cosa Nostra, Russian and Eurasian organized crime groups have been linked to various mortgage fraud schemes, such as short-sale fraud and loan origination schemes.

Mortgage fraud rings "recruit people who have access to tools that enable them to falsify bank statements, produce deposit verifications on bank letterhead, originate loans by falsifying income levels, engage in the illegal transfer of property, produce fraudulent tax return documents, and engage in various other forms of fraudulent activities," the report said.

"Mortgage fraud perpetrators have a high level of access to financial documents, systems, mortgage origination software, notary seals, and professional licensure information necessary to commit mortgage fraud, and have demonstrated their ability to adapt to changes in legislation and mortgage lending regulations to modify existing schemes or create new ones," the report said.

Fannie Mae reported that fraud on short sales and real estate owned (REO) properties continues to "thrive as a result of the opportunities created by defaulting markets."

Freddie Mac is also seeing property flips with phantom rehabilitation to increase property valuations, and has been interviewing borrowers and their neighbors to determine if the rehabilitations are actually occurring.

Also, Freddie Mac is reporting that fraudsters continue to use transactional lenders such as "dough for a day" businesses that loan potential borrowers money so it will appear that they have assets when applying for a loan.

Inflated appraisals remain a problem for underwriters, with overstated comparable properties used to increase the value of the subject property. Perpetrators will either employ a rogue appraiser as a conspirator or falsify appraisal documents outright.

One of the most common short-sale schemes involves "property flopping" — obtaining a property at less than its market value, then selling the property in a dual closing the same day or within a short time frame for a significant profit.

To pull off such property flops, the FBI said, fraud perpetrators may withhold the "best offer" to the lender, manipulate broker price opinions (BPOs) and MLS data, and engage in non-arm’s-length transactions.

They may resort to bribing brokers and appraisers, or refuse to allow the broker or appraiser access to the property unless they are present.

To hide their involvement in short sales, they may sell properties to a limited liability company (LLC) or trust months before a resale, or sell a property to a family member or other party they control and deed the property back to themselves.

Although authorities believe most mortgage fraud schemes are never detected, hardly a day goes by without an announcement of new mortgage fraud charges or convictions. Many such announcements are cataloged on the website, Mortgage Fraud Blog, authored by an attorney, Rachel Dollar, who represents lending institutions in mortgage fraud cases.

A roundup of a few cases making the news recently includes: