Home prices are in the midst of another slide and won’t hit bottom until late next year or early 2013, according to a survey of more than 100 economists, real estate experts and investment strategists.

The survey, sponsored by Zillow Inc. and conducted by Pulsenomics LLC during the first two weeks of December, asks participants to project the path of the S&P/Case-Shiller U.S. National Home Price Index over the next five years.

Home prices are in the midst of another slide and won’t hit bottom until late next year or early 2013, according to a survey of more than 100 economists, real estate experts and investment strategists.

The survey, sponsored by Zillow Inc. and conducted by Pulsenomics LLC during the first two weeks of December, asks participants to project the path of the S&P/Case-Shiller U.S. National Home Price Index over the next five years.

When last published Nov. 29, the index showed that as of Sept. 30, national home prices were down 3.9 percent from a year ago, but were essentially flat from the second quarter to the third.

Nationally, the index showed prices down 31.3 percent from their 2006 peak, to levels last seen in early 2003. A separate S&P/Case-Shiller home-price index showed annual declines in 18 of 20 markets tracked.

The panel of experts surveyed by Pulsenomics said they expect the S&P/Case-Shiller National Home Price Index, which covers all nine U.S. census divisions, will show a 1.97 percent annual decline at the end of fourth-quarter 2011, and fall an additional 0.18 percent in 2012. 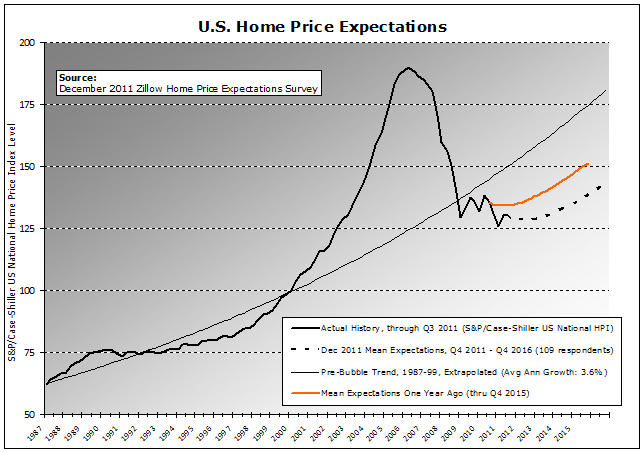 "There is a consensus among the nation’s top housing experts that we have not yet reached a bottom and are instead working through a prolonged bottoming process," Zillow’s chief economist, Stan Humphries, said in a statement.

On average, the panel predicted national home prices will rebound by 1.75 percent 2013, followed by steady annual appreciation of 2.7 percent to 3.3 percent through 2016.

The average survey data are consistent with "a sluggish recovery scenario," said Pulsenomics founder Terry Loebs, with price appreciation less than that thought of as "normal" during the pre-bubble years.

John Brynjolfsson, chief investment officer with the investment management firm Armored Wolf, for example, was the most pessimistic panel member. Brynjolfsson — a former PIMCO executive who often appears in TV and print media reports — sees the S&P/Case-Shiller national index falling by 10 percent in 2012 and 5 percent in 2013, and not rebounding until 2015.

Economic forecaster and financial columnist Gary Shilling also has a pessimistic outlook, forecasting an 8 percent annual decline in the index next year, followed by declines of 6 percent in 2013 and 4 percent in 2014. Shilling sees no price appreciation in the index in 2015 and 2016.

At the other end of the spectrum are analysts like Constance Hunter, deputy chief investment officer with AXA Investment Managers, and Bill Cheney, chief economist with John Hancock Financial.

That’s a more optimistic long-term outlook than that of NAR’s chief economist, Lawrence Yun, who thinks the S&P Case-Shiller National Home Price Index will show 2.5 percent appreciation in 2012, followed by annual growth of 3.5 percent in 2013 and 4 percent from 2014-2016.

"Given the current economic climate and uncertainty around the government’s future role in housing, it’s not surprising to see such a wide dispersion in long-term forecasts," Humphries said. "As the market starts to stabilize, we should see individual forecasts start to converge."

Humphries is sticking to the middle of the road, predicting a 1 percent annual decline in the national home-price index next year, followed by 1 percent appreciation in 2013, and annual growth of 2 percent to 2.5 percent for 2014 through 2016.