Homebuyers sometimes gripe that their real estate agent seems more interested in closing a sale and collecting a commission check than in helping them find the right home at the right price.

Sellers, too, may feel pressured by their broker to make price reductions or accept an offer that’s less than what they’d hoped to receive for their home.

What buyers and sellers alike may not realize is that, in many cases, real estate brokers and agents actually have no legal obligation to look after their best interests.

Laws in 25 states now allow brokers to provide services to buyers and sellers as "transaction brokers" or "facilitators," without traditional fiduciary duties of loyalty and obedience.

All 50 states also provide avenues for brokers to "double end" a deal, working with both the buyer and seller in the same transaction and avoiding the need to split commission income with a cooperating broker. In such instances, neither the buyer nor seller is fully represented, critics say.

Because they rely on referrals and repeat customers for much of their business, scrupulous real estate brokers and agents strive to provide a high level of service, whether they are representing clients individually in "single agency" relationships or double-ending deals.

But consumers shouldn’t assume that their broker or agent is obligated to represent their interests, and their interests alone, until they have seen a written disclosure describing the agency relationship under which services are being provided to them.

Agency relationships are created when one person agrees to act on another’s behalf, or represent them in dealings with a third party.

Once an agency relationship is established, agents owe their clients "fiduciary duties" of loyalty and obedience. They are typically required to place their clients’ interests ahead of their own, providing services with honesty and good faith while avoiding conflicts of interest or "self-dealing."

But the rules governing agency relationships between consumers, real estate brokers and their agents vary from state to state, and all have been rewritten in the last 25 years.

Depending on the laws of the state they are licensed in, brokers can provide services in one of six relationships:

Single agency: A broker or agent represents the interests of the buyer or seller alone in a transaction — either as the listing agent or as a "buyer’s agent." Consumer advocates and agents who work exclusively with buyers say single agency is the best form of representation.

Designated agency: One broker designates two of their agents to represent the buyer and seller separately. When states require that brokers implement safeguards to protect clients’ confidential information, designated agency is the next best alternative to single agency, academics and consumer advocates say.

Disclosed dual agency: A lone agent provides services to both the buyer and the seller in a limited agency relationship, without an obligation to represent the best interests of either.

In states with no provisions for designated agency, when two agents affiliated with the same broker represent both sides of a transaction, the broker may be considered a dual agent.

Although controversial even among real estate brokers and agents, disclosed dual agency does present opportunities for experienced sellers to negotiate discounted or "variable rate" commissions in advance.

Transaction brokerage: One agent or two agents at the same brokerage may provide services to the buyer, the seller, or both, in a non-agency relationship, owing no fiduciary duties of loyalty and obedience.

In addition to having the same disadvantage as dual agency — neither the buyer nor seller can expect an agent to represent their interests during negotiations — consumers served by transaction brokers have little leeway to file claims for professional negligence.

Although subagency was a standard industry practice for most of the last century, this form of representation has largely fallen out of favor because of legal risks for brokers and sellers. 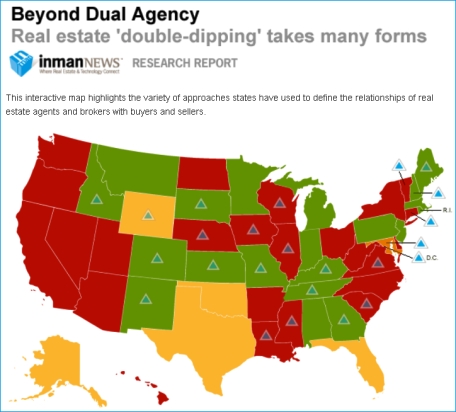 Sellers should try to "knock one percentage point" off the standard commission right off the bat, the Consumer Federation of America advises, and "insist that if their broker double dips, the commission be reduced another percentage point or two."

Of all the services that real estate brokers and agents provide for their clients, two of the most important are "matchmaking" — connecting buyers and sellers — and negotiation. Agency relationships can come into play during both stages.

During the matchmaking stage, brokers who are hoping to double-end a deal may attempt to steer buyers to listings they represent. Or they may fail to aggressively market their sellers’ listings in the hopes of limiting the pool of buyers to those they will represent.

Brokers may offer incentives, such as higher commission splits, to agents who sell in-house listings to their buyers.

"My broker doesn’t endorse this practice (of offering such incentives), as it may lead to an agent ignoring the best interests of the client in favor of the best paycheck," said Chris Dowell, an agent at Re/Max Premier Realty in Prairie Village, Kan., a Kansas City, Mo., suburb. Dual agency and several other forms of representation are permitted in Missouri.

"There is a large, local brokerage that pays a significant bonus for selling in-brokerage listings, and because of that, faces … lawsuits, as well as a buying public that is very cynical toward that brokerage’s actions."

During the negotiating stage, brokers and agents working with the buyer and seller in the same transaction may disclose confidential information — such as how much the seller is willing to accept — in the hopes of moving a transaction along.

Michele Guss, an agent at Thompson’s Realty in Phoenix, said that in her brokerage, agents don’t "sit around gossiping about their clients and transactions."

"With that said, I will say when I was with (another brokerage), agents were always telling other agents what listing they had and what a seller would be willing to accept. This is not OK. Agents are not authorized to give any (information) unless the seller or buyer specifically authorizes them to do so," she added.

Boost for brokers, but at what cost?

The California Association of Realtors, in soliciting contributions to its Realtor Action Fund, claims that the lobbying it has done to preserve dual agency in the state "saves" Realtors thousands of dollars each year.

Not having to split a commission with a cooperating broker provides a boost to the bottom line.

CAR spokeswoman Lotus Lou said the group currently estimates that preserving dual agency generates $1,873 in annual savings for the average agent and $4,627 per brokerage, but was unable to provide specifics on how those estimates were derived.

"Each agent and firm makes that additional amount, respectively, because of dual agency," Lou said.

A study of 4,154 repeat sales in the Memphis, Tenn., market from 1997 through 2003, "Homeowners’ Repeat-Sale Gains, Dual Agency and Repeated Use of the Same Agent," found no convincing effects of accepting dual agency for buyers or sellers.

Another study of 1,334 Utah home sales in 1999 and 2000 found that the impact of agency representation varied by property size.

But the study found that the benefit of working with a buyer’s agent could easily be canceled out by generous commission-split offers.

That study, "Agency Representation and the Sale Price of Houses," revealed that sellers of medium- to large-size properties agreed to larger price reductions when the buyer was represented by a designated agent.

The authors of the study theorized that listing agents might be more likely to pressure sellers to agree to a price reduction if an offer was coming from a buyer represented by another agent at their firm.

Redfin — which primarily represents buyers in single-agency relationships — acknowledged that sellers represented by dual agents may have been able to negotiate commission discounts.

NAR’s latest survey of members showed 18 percent of Realtors practiced transaction brokerage in 2010, up from 10 percent the year before. The percentage of Realtors practicing buyer and seller agency with disclosed dual agency dropped from 41 percent to 32 percent.

Statistics provided to Inman News by four of the nation’s largest multiple listing services show declines in same-broker or same-office transactions during the last decade.

At the largest MLS in the Northeast, Rockville, Md.-based Metropolitan Regional Information Systems Inc. (MRIS), for example, 21.7 percent of transactions in 2002 were handled by an agent or agents working out of the same office.

Roselind Hejl, an agent at Coldwell Banker United Realtors in Austin, Texas, said she believes that dual agency is becoming unacceptable to consumers in an era of increasing transparency.

"I think (dual agency) is a holdover from the days when both agents represented the seller, and the buyer was technically not represented. It was customary to ‘double dip’ and earn both sides of the commission," she said.

"In today’s world, agents may get away with this once in awhile, but dual agency is rapidly coming to an end. The public wants more information and transparency. It is up to us to respond to that."

Kansas agent Chris Dowell, meanwhile, said he believes the wealth of information available on the Internet has encouraged a "do-it-yourselfer" mentality, and that there is a "trend toward unrepresented buyers purchasing through listing agents directly."

Worries about legal liability aren’t the only factor that may be contributing to a general decline in double-ending.

The role of real estate websites

Consumers today are likely to start the home search process on websites like Realtor.com, Zillow and Trulia that feature advertisements or lead forms for brokers and agents who are seeking to represent buyers in their market.

Those advertisements — typically worded as an offer to provide more information about a particular property that has come up in search results — have been controversial with some listing brokers, who want inquiries from prospective buyers funneled to their agents.

Critics say listing brokers who object to the ads are worried that they are losing out on opportunities to double-end transactions.

Some brokerages — such as Minnesota-based Edina Realty Inc. — have pulled their listings from "third-party" sites that send business to their competitors over concerns about ads and lead forms that appear next to their listings.

The nation’s fourth-largest brokerage, Pittsburgh-based Howard Hanna Real Estate Services, recently took another tack, entering into marketing agreements with Realtor.com and Zillow to prevent competitors’ advertisements from appearing next to the company’s listings.

Third-party sites not only provide listings data, but statistics on market trends and neighborhood demographics, crime and schools, so consumers are no longer reliant on real estate agents as the primary source for community, neighborhood and home information.