Real estate search company Trulia is retooling some of its marketing offerings for real estate professionals in what the company says is a "major investment" in the interests of brokers.

"As a company we’ve always been focused on all levels of the real estate ecosystem," including consumers, agents, brokers and multiple listings services, Pete Flint, Trulia’s CEO and co-founder, told Inman News.

Real estate search company Trulia is retooling some of its marketing offerings for real estate professionals in what the company says is a "major investment" in the interests of brokers.

"As a company we’ve always been focused on all levels of the real estate ecosystem," including consumers, agents, brokers and multiple listings services, Pete Flint, Trulia’s CEO and co-founder, told Inman News.

But since the beginning of the year, the company has been shifting its focus to brokers, Flint said.

"Our goal here is to improve our commitment to the real estate industry and make brokers successful, and how we’re doing that is ensuring we’re delivering a large number of high-quality leads to our brokers and improving data accuracy on Trulia itself," he said.

In a letter to brokers posted on Trulia’s blog today, Flint said that, for the past few months, he and a team of senior executives had traveled across the country meeting with franchisors, regional brokerages and smaller brokers.

After listening to their feedback, he said, the company will be making at least three major changes over the next several weeks:

1. Listing agents and brokers will be clearly identified at the top of and within the body of every listing page. 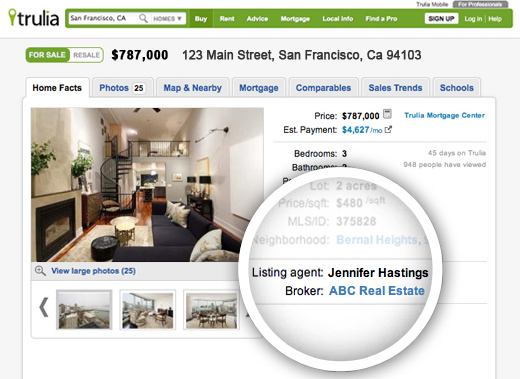 "Trulia Pro" lead forms that generate leads for agents who work for competing brokerages will continue to appear at the bottom of listings not claimed by listing agents or brokers. Claiming listings is free.

2. Featured listings — properties that listing agents or brokers have paid to appear at the top of consumer search results — will no longer display advertising from competing agents or brokers. All ads on other listings will be clearly identified as paid advertisements, including Trulia Local ads, which appear higher up on listing detail pages and can spotlight agents’ listings and link back to their websites. 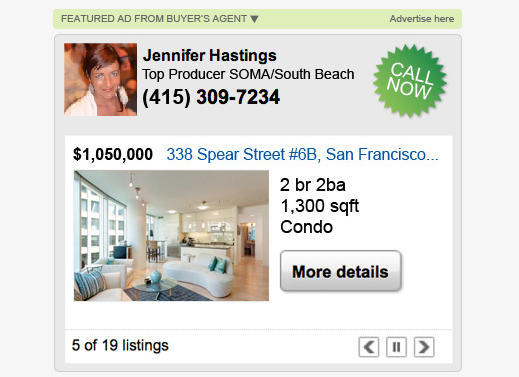 Flint said the change reflects Trulia’s commitment to data accuracy. Though the site’s listing sources include direct feeds from brokers and MLSs, individual agent uploads, and third-party aggregation services, Trulia prioritizes MLS and broker feeds as the most accurate, the company said.

Nonetheless, in his letter to brokers, Flint said Trulia could not surmount that challenge alone.

"We know that direct data feeds from brokers drastically improve data accuracy. We ask for your help and support, and are committed to continue to work with the industry to improve data quality on all levels," he said.

"We need to partner with the industry to be successful," he told Inman News.

Trulia and other major real estate search portals, including Zillow and Realtor.com, have been at the center of a recently renewed, long-running industry debate about the pros and cons of listing syndication.

HomeServices of America Inc. subsidiary Edina Realty announced in November that it would pull its listings from third-party real estate search sites. San Diego-based broker ARG Abbott Realty Group made a similar announcement in January. Both brokerages had expressed concerns about the advertisements and lead forms for other brokers’ agents that sometimes appear next to listings on national listing sites.

Edina Realty has continued to provide listings to Realtor.com, and last month was still in negotiations with the site’s operator, Move Inc.

Last week, the GoodLife Team, a small, Austin, Texas-based brokerage, stopped syndicating its listings to Trulia and canceled its advertising on the site because the firm objected to ads for competing agents appearing next to their premium listings.

Trulia said the company did not decide to remove competing advertising from featured listings because of the GoodLife Team’s decision.

"We’ve been hearing this for some time and planning to make these changes. The GoodLife Team made their announcement before we could tell them about the changes," Flint said.

"For our paying customers, (this represents) a significant increase in the value" of their featured listings, he added.

Flint said that other than "one or two isolated incidents" of brokers pulling their listings from the site, Trulia wasn’t seeing a drop-off in broker feeds.

"These changes are the result of what we’ve heard from partners over the last several months," Flint said.

Trulia announced management changes in February and December of last year in view of the company’s eventual plans to pursue an initial public offering. Zillow, one of Trulia’s chief competitors, launched a successful IPO last year.

Ginger Wilcox, Trulia’s head of industry marketing and relations, said she had no news to share about the company’s progress toward an IPO, "but I can say that we are building Trulia to be a successful company for the long term."

Wilcox declined to comment on the company’s profitability, citing Trulia’s current status as a private company.