A new art gallery might be the first building to be draped from head to toe in chainmail. And, given the intricacy of its design and the fact of its hand-welded 520,000 stainless steel rings, it may be the last.

One part disbelief, two parts swords and one part elegance mix in the mind when it’s first seen overlaying the building.

Also the question: "Is that really chainmail?"

The answer is "yes."

A new art gallery might be the first building to be draped from head to toe in chainmail. And, given the intricacy of its design and the fact of its hand-welded 520,000 stainless steel rings, it may be the last.

One part disbelief, two parts swords and one part elegance mix in the mind when it’s first seen overlaying the building. 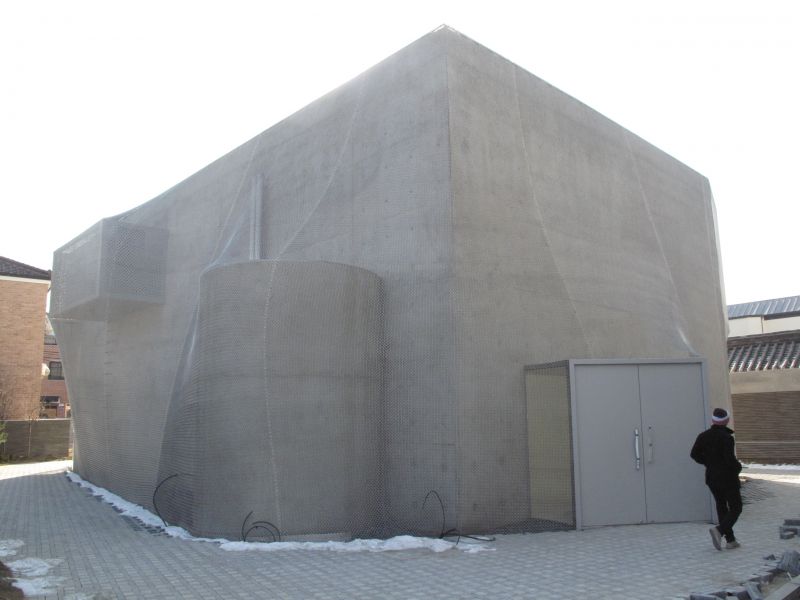 Also the question: "Is that really chainmail?"

The answer is "yes."

Chainmail, legit, made from 520,000 hand-welded stainless steel rings, covers the cubed (with slight protrusions and irregularities, including a staircase) concrete building, in Seoul, South Korea, from head to foot on all sides. 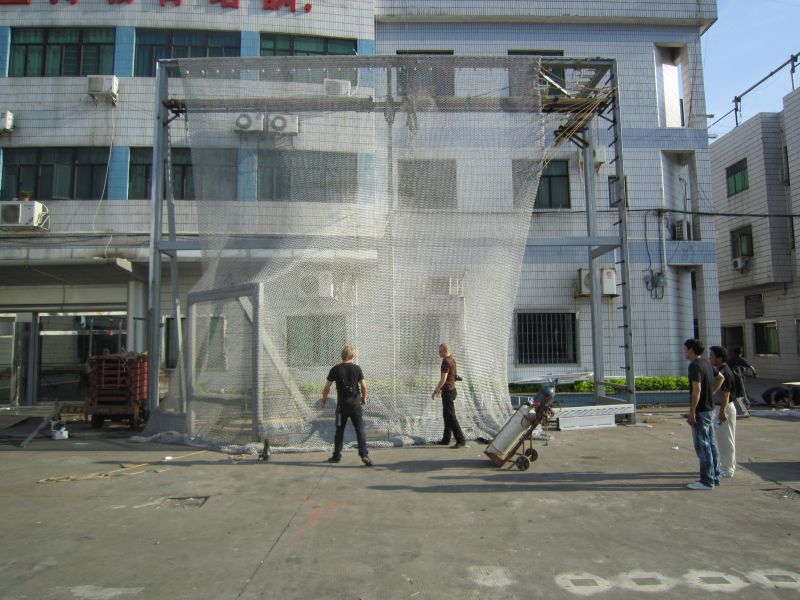 Testing out the chainmail via Front Inc.

The neighborhood’s old, but it’s in the process of being revitalized into a bohemian, weekend destination. Where the city’s hip walk and window shop, taking in the shady, tree-lined streets, sipping coffee at outdoor cafes like "IceSand Coffee," shopping at vibrant, boutique stores like "Coolgirls Room," and visiting the multiple art galleries that have sprung up among the statued plazas and clean, open spaces.

Setting the tone for the gallery’s chainmailed, medieval spirit is a nearby 14th-century grand palace hilltop compound, Gyeongbokgung, one of Seoul’s premiere attractions. 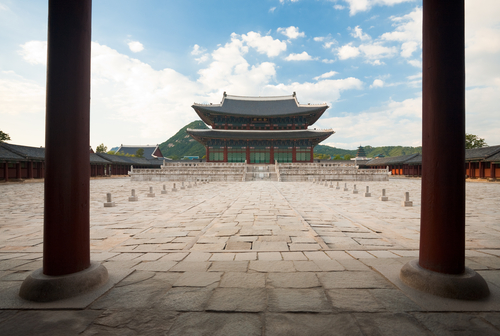 Palace at Gyeongbokgung via Shutterstock

The clients wanted a blocky, windowless, modernist, concrete gallery space. However, it became clear that design would clash — starkly — with the older buildings and condensed nature of the neighborhood surrounding it.

So, architects at SO – IL started thinking of ways to soften the sharp visual contrast the concrete shell, as designed, would create. They needed a material that blurred the building’s lines and that could also withstand a typhoon’s heavy, wind-driven rain and a Seoul winter snow. Metal — in the form of chainmail — soon emerged as an answer.

Then the work began, and it wasn’t easy. Making the chainmail idea a reality took a year — six months of logistics and six months of production. 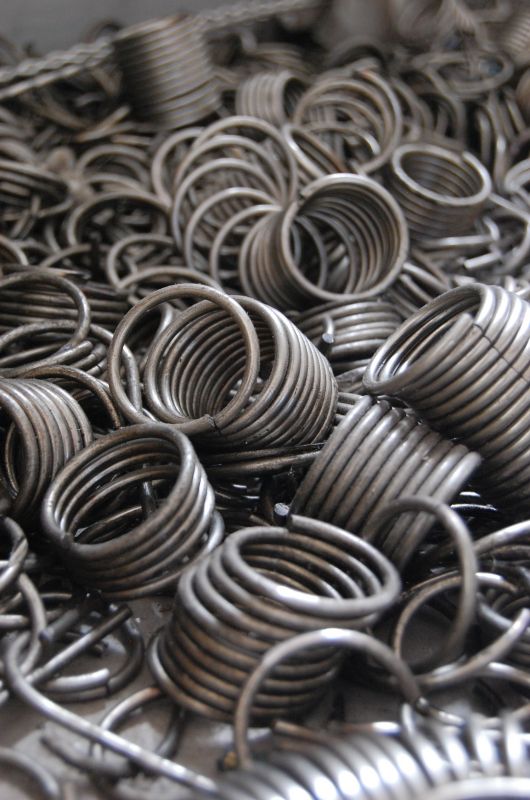 For aesthetic and structural reasons, the chainmail’s rings needed to be larger in diameter than the rings used in traditional chainmail products like butcher’s gloves, shark suits and medieval armor.

SO – IL, and the project’s engineering firm, settled on an inch-and-a-half ring design, about three times bigger than traditional chainmail rings.

Since chainmail is not usually — if ever — used on a building-sized scale, the design required one-of-a-kind handmade production.

"It’s like weaving," said Idenburg, of how he, his firm and the design engineers had to think of constructing the building’s outer layer. They also had to find a manufacturer that could do it by hand.

Turns out that was found in a village in an industrial region in the bare China countryside about four hours southwest of Beijing.

Idenburg visited the village early in the production process to check on development. "When I first showed up, it was a little bit of a disappointment," he said.

There was one worker in a grimy, small workshop measuring about 18 by 30 feet; it had taken him a month and a half to make 1 square foot of chainmail. Idenburg was ready to think of another way.

The worker said, "Wait, I have an uncle and a cousin who do this, too," Idenburg said. Eventually, he estimates, between 50 and 100 workers were recruited to the project to hand weld each of the 520,000 rings of the finished chainmail.

Welding half a million stainless steel rings into a precisely designed pattern was a great task. It took the Chinese workers six months to make the chainmail façade, which came in 15 sections that were joined together at the building site.

But assembling the rings might have been the easy part.

Before that step could happen, a design had to be developed so the chainmail could be draped, at a constant tension, over the irregularly shaped building.

As a one-of-a-kind design, "every bolt and nut had to be engineered and built," Ra said. "It was very difficult." 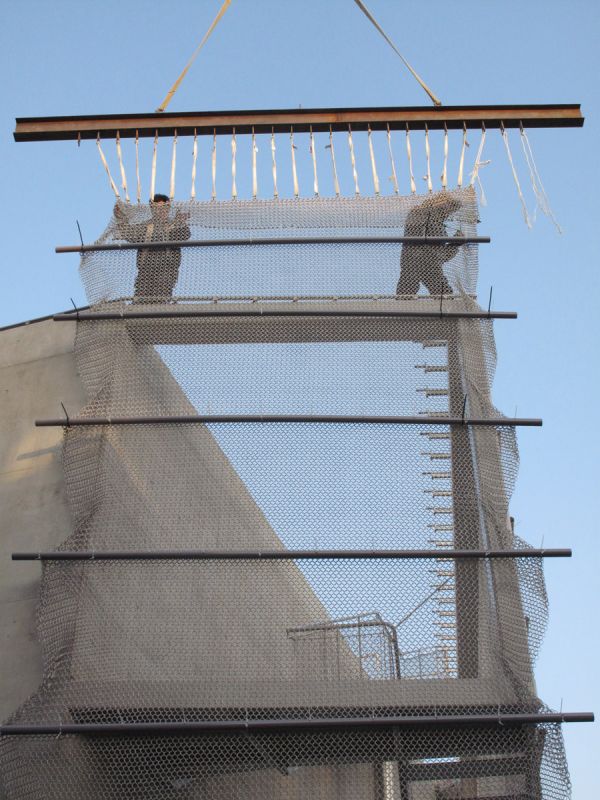 Wherever there was a bulge in the building — there were several incongruous protrusions — Ra and his team had to calculate the correct number of rings on each row so the sheet maintained a consistent tension throughout.

The designers used tensioners just over the building’s parapet, allowing the 15 sections to be individually tightened or loosened to achieve the appropriate tension. The system also allows for the swatches’ tensions to be adjusted as they change over time with age and weather.

The sheets’ attachment to the building is seamless. Their bases are welded to a metal bar a foot and a half below ground level, and the tops are stretched over the parapet. 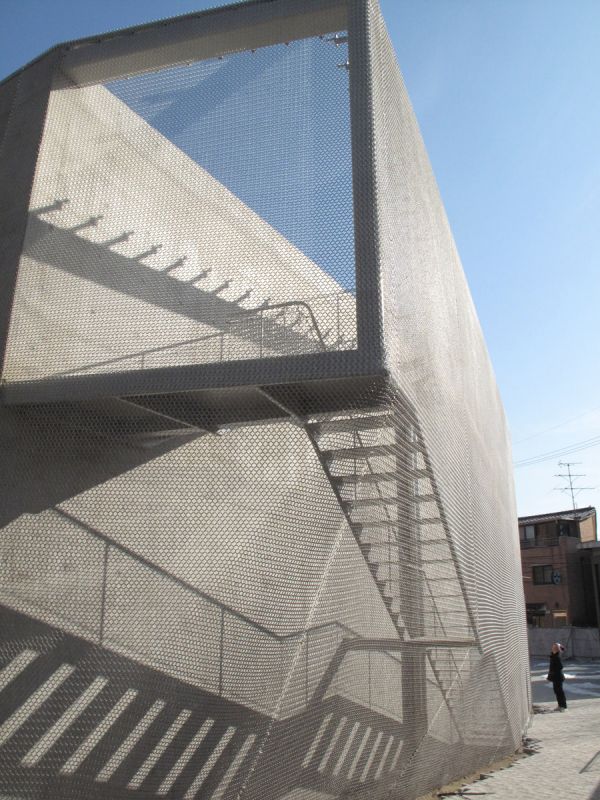 The result is a chainmail-draped contemporary art gallery building that harmonizes with a historic up-and-coming neighborhood. Like other striking art galleries and museums — like (on a grand scale) the Guggenheim in New York City — the building promises an aesthetic experience, not just an exhibit.