You might think the video below is the trailer for Hollywood’s next big summer blockbuster. But it’s actually the listing for one woman’s $35 million Malibu house.

You might think the video below is the trailer for Hollywood’s next big summer blockbuster. But it’s actually the listing for one woman’s $35 million Malibu house.

DeeAnna Staats hired Hollywood movie director Graham Henman to shoot the three-minute film, called "The Spider and the Fly," with Hans Zimmer Studios (which produced the musical score of "The Lion King," "Gladiator" and "True Romance") as the masterminds behind the soundtrack.

The movie, which will take the place of a regular listing, will be sent out by Staats to prospective buyers across the United States and the globe — on gift-wrapped iPads.

You can pause for a moment to think about that (and take a look at the gorgeous home in the gallery below). 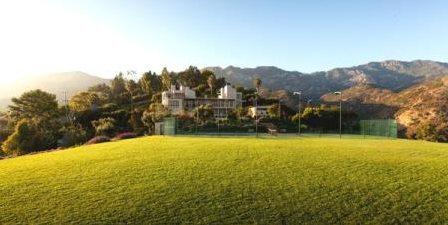 "I wanted to present [the home] to buyers in a creative way that would give them a real sense of the place," explained Staats, owner of luxury-home-furnishing and interior-design company Staats & Co. "[It’s] a unique and very emotional house."

Though Staats won’t disclose exactly how much it cost to produce the short film, she did concede that it was a "full Hollywood production" — one that’s already been downloaded and sent out on 100 brand-new iPads.

Christened the "Carbon Mesa," the 9,500-square-foot Malibu mansion sits high above California’s "Billionaire’s Beach." It features 4,500 square feet of outdoor patio space, six enormous bedrooms, nine bathrooms, a movie theater and a wine cellar that can store more than 800 bottles. That’s grandeur that, as far as we know, is surpassed only by Gianni Versace’s Miami palace and the newly-listed, $58 million "La Palais" in nearby Beverly Hills.

But if you think that you have to be a multimillionaire to create a snazzy short film to reel in prospective buyers, you’re wrong. Though not all of us have access to Hollywood directors, an increasing number of owners and Realtors are getting behind the camera themselves to dabble in some video marketing — and it’s working.

Eric Lavey, an agent with Keller Williams Realty in Beverly Hills, produced a short movie about a Hollywood Hills listing, marketing it as a sizzling bachelor’s home. The sexy two-minute flick snagged a buyer for the $969,000 property in less than 30 days.

And who could forget the risque, black-and-white short film produced by Neo Property in Australia? The, er, cheeky video features models strolling through the spectacular beachfront Queensland home in the buff. The home, valued at $2.19 million, sold after just 3,800 hits on the Internet. (Wonder how many of those were repeat views?).

We imagine the fate of Carbon Mesa to be quite similar — especially with those iPad freebies and all.