Editor’s note: This story has been updated to reflect that the order of the apps evaluated by Clareity Consulting in the charts below does not reflect the number of downloads or download ranking.

Clareity looked at the 10 most popular residential real estate-related consumer apps for Android and iOS (iPhone, iPod Touch), considered only their smartphone versions, and graded them based on several key features and their ease of use, design and speed. The result was a clear three tiers of apps: the excellent, the good and the mediocre.

Clareity’s grading of the most popular iOS platform mobile apps

Source: Clareity Consulting. * Ratings for the most current version of the apps. Order of apps on list does not reflect number of downloads or download ranking.

The review also revealed that major real estate brands are falling behind the portals in terms of app design, functionality and development.

Realtor.com, Zillow and Trulia — also the three most visited real estate-related websites in July — topped the lists for both Android and iOS apps, whose features and functionality have, in general, converged, Clareity noted.

Realtor.com, with its accurate and up-to-date listing information, ranked in the top tier of apps — though its design could use an upgrade, Clareity reviewers said. Zillow, despite inaccuracies in listings data, ranked in the top group, too, thanks to an abundance of in-depth property-related information like market data, graphs, pricing history and tax history. With its clean interface, smooth design and intuitive workflow, Trulia rounded out the must-have mobile app category in Clareity’s review.

Clareity’s grading of the most popular Android platform mobile apps

Source: Clareity Consulting. * Ratings for the most current version of the apps. Order of apps on list does not reflect number of downloads or download ranking.

The second-tier apps — including Redfin, Homes.com and ZipRealty (the last two ranked in the top 10 for iOS only) — had some cool features, Clareity reviewers said. ZipRealty‘s augmented reality feature for the iPhone version of its app stood out, Clareity pointed out, but, overall, the group suffered from limited listings, distracting design features and sparse listing details.

Clareity also recognized the Houston Association of Realtors’ app, the only association-produced app in the review, for its solid, full-featured design, commending the Google Street View links that showed up with its listings.

Apps in the bottom tier were so dysfunctional, Clareity reviewers said, that they almost hurt their brands. Apps by Century 21, Re/Max and Coldwell Banker (the latter ranked in the top 10 for Android only) suffered from extremely slow response times, minimal property detail and glitch-filled platforms, if not overly basic features. "The app is plagued by interstitial loading screens even when just navigating, and the delays are even worse when it needs to pull data from the Internet," Clareity said of the Century 21 app. 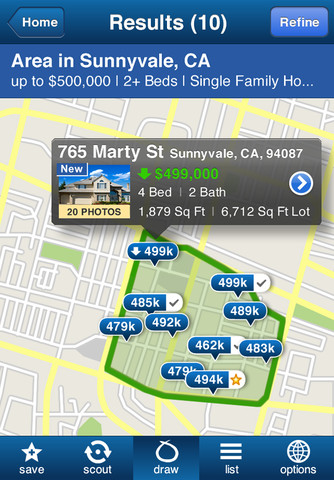 "This is a superb application," Clareity said in its review of Realtor.com’s app. One of the app’s highlights, the review pointed out, was the ability to draw a search area on a map and then have all the available listings show up within that boundary. Despite a heavy dose of clip art, the accuracy of its listings and its extremely fast speed make the app a winner, Clareity said. The review concluded that the app’s ease of use would be enhanced if both active and sold listings could be displayed on one screen. 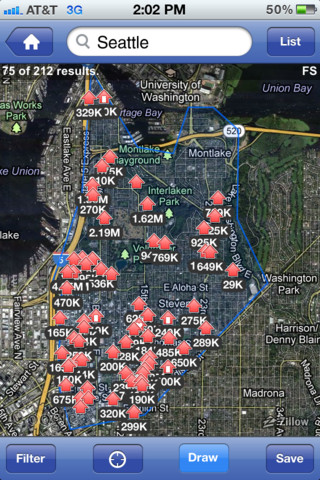 "If it was easier, in terms of both interface and data accuracy, to pick out what was actually in the market, this would be the only app anyone would need," Clareity concluded in its review of Zillow’s app. Also, the app clearly features listing agents’ contact info, mitigating a major complaint many real estate professionals have of the desktop version of Zillow’s site, Clareity pointed out. 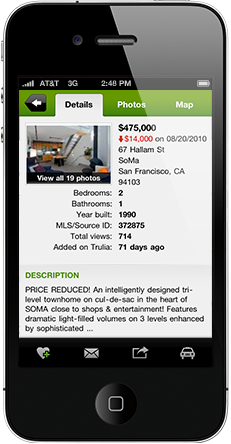 Data accuracy — the issue plaguing Zillow as well — is a problem for Trulia’s app, but its simple, elegant design paired with enhanced listing features like traffic info, nearby amenities, map-based school boundaries, price histories and a plethora of sharing tools, elevates it to the top tier of real estate-related mobile consumer apps, Clareity said.