Now Qsar spends about $2,000 a month — roughly a quarter of his ad budget — on Facebook ads.

Like Qsar, many brokers and agents are spending their ad dollars nowadays to harness the connecting power of social media — to capture new business, to stay top of mind, to grow their community and influence and to generate higher-quality leads.

And Facebook might be the most effective social media channel for marketing to consumers. According to a January 2012 survey of 972 marketing professionals by marketing software provider HubSpot Inc., Facebook was a more effective tool for converting consumers into customers than Twitter, LinkedIn and company blogs. 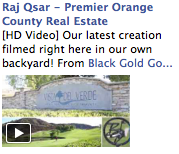 This Facebook "sponsored story" ad by Raj Qsar promoting a video shoot in a luxury neighborhood in Orange County targeted Facebook users who liked the community Facebook pages of this neighborhood and the local golf course, were at least 25 years old, and who also liked anything to do with horses or the city.

Ben Kinney, a Keller Williams Realty agent in Bellingham, Wash., spends about $500 per month on Facebook ads and generates between 10 and 20 leads each month from them, with near 100 percent engagement.

About half of those leads, Kinney said, go to an in-person appointment with him or a member of his team; the other half check out his listings page.

But advertising effectively on Facebook is not easy, said Stacey Harmon, a real estate marketing consultant who specializes in Facebook. "It’s a complicated opportunity," she said.

Facebook ad strategy all depends on your goal, Harmon said. Do you want to advertise a listing, grow the number of people who "like" your business page, get the attention of relocation agents in other markets or keep your community aware of you and what you do?

There are three types of Facebook ads, Harmon said:

The Facebook ad about the open house that generated a six-figure commission for Qsar was a sponsored story.

A fan of Qsar’s business page liked the post and, because Qsar had paid to make it a "sponsored story," it showed up as an ad on the Facebook pages of that fan’s friends.

One of those second-degree Facebook contacts saw Qsar’s ad, got in touch with him, became a client and eventually sold, and bought, a home with him.

"The key with Facebook ads is that you can be very specific in your targeting," said Heather Elias, the director of social business practice for the National Association of Realtors. Before joining NAR in late July, she worked as a real estate agent in Loudon County, Va., where she also wrote a blog.

Unlike Google, Facebook allows you to specifically target ads by demographic stats, Elias said. She would choose, for example, to advertise market reports to a subset of Facebook users (between 30,000 and 40,000 users) within a 10-mile radius of where she worked.

Some ads Elias ran were not intended to be clicked (for some ads, Facebook charges only on a per-click basis), but just to be seen, she said. One ad promoting her blog got 500,000 impressions for free, she said, because there was no actionable language in the ad.

Other ads Elias ran, like the "crafted" one below, were meant to generate leads. She had some of the greatest success when the ad directed users to a lead capture form on her website. About 45 people signed up, she said — none unsubscribed and the ad generated four deals, for about $400 in total advertising costs.

Some ads are designed to capture Facebook "likes." A strategy called "fan-gating" requires users to "like" a business page in return for something, like a market report or a chance to win a Starbucks gift card, Harmon said.

Because Facebook has so many different opportunities to advertise, it’s important to be strategic and clever, and also do the little things that will make your ad stand out, Harmon said.

Ben Kinney sometimes uses an image of an upside-down house to advertise short sales, he said. He also puts his phone number in some ads, which allows him to capture leads without paying the click fee Facebook charges for its stand-alone ads.

Qsar uses professional photography in all of his ads. Sometimes, he said, he even uses what he calls "eye candy" — enticing images, with sharp colors and intriguing detail. Advertising, especially on Facebook, can be like "a love affair," he said.

Sometimes the best Facebook advertising is just to cultivate, consistently and frequently, the brand you want your real estate business to be known for. And that can be free.

Gillian Swanson, an agent in Livingston, Mont., has been using Facebook ads for about two months, spending an average of about $400 per month. But Swanson says she continues to generate the most leads from her personal Facebook page.

By cultivating an "intelligently humorous," brand via her personal page, Swanson said she’s been able to set herself apart from other agents in the area. She does work with the local theater and posts lots of information about that, which adds an upscale flavor to her brand, she said.

Reporting on wildfires that swept through the area recently helped make her page (and her business) more prominent in the rural Montana community, as well. "I decided I’d be the person to post the updates," she said.

Swanson has more friends on her personal page than she has likes on her business profile, she said. She has plans to stop paid advertising with Facebook next month.