The new system, reInsight MLS, is tailored to the needs of MLSs with more than 5,000 members, the company said in an announcement Friday.

The new system, reInsight MLS, is tailored to the needs of MLSs with more than 5,000 members, the company said in an announcement Friday.

Georgia MLS, which has more than 25,000 members, is the first to launch reInsight. Based in Tucker, Ga., GAMLS has nearly 54,000 active listings and more than 1 million off-market listings in its database.

GAMLS has been an LPS customer for more than 15 years and collaborated with LPS to build reInsight, according to Rich Lull, managing director for LPS MLS Solutions.

Up until last month, GAMLS had had LPS’ RE/Xplorer MLS system, which is now fully retired as an LPS product. Three years ago, when looking for a replacement for RE/Xplorer, GAMLS agreed to work with LPS to build a new, customizable system for large MLSs on the condition that GAMLS "would have as much influence on the product as we do, (and) also that it would become a viable product for us to sell into the marketplace. They did not want to end up with" the only version of an MLS system, Lull said.

LPS realized that "to really meet the needs of the next 10 years, we’re going to have to start with a blank piece of paper and build a whole new MLS system," he said.

The result is a highly customizable parcel-based database that integrates public records information with MLS data and includes a comparative market analysis (CMA) tool that uses both. The system is an open platform, which means it allows the integration of third-party products.

"Most of the MLS systems in the past have been monolithic. The world has changed within the last 10 years where the MLS vendors are not that innovative. So much innovation has been coming into the market that the real estate agents need. To be fair, you need to design a system that supports best of breed," Lull said.

For example, it could be that another company’s CMA tool is better than the one embedded in reInsight or that an MLS wants to incorporate a showing management system, he said. Whatever the product, the platform’s open architecture enables third parties to tightly integrate their tools within the MLS system so that users see the products as part of the same system.

ReInsight also offers a map-centric interface that allows users to work from a single view without having to toggle between different screens. 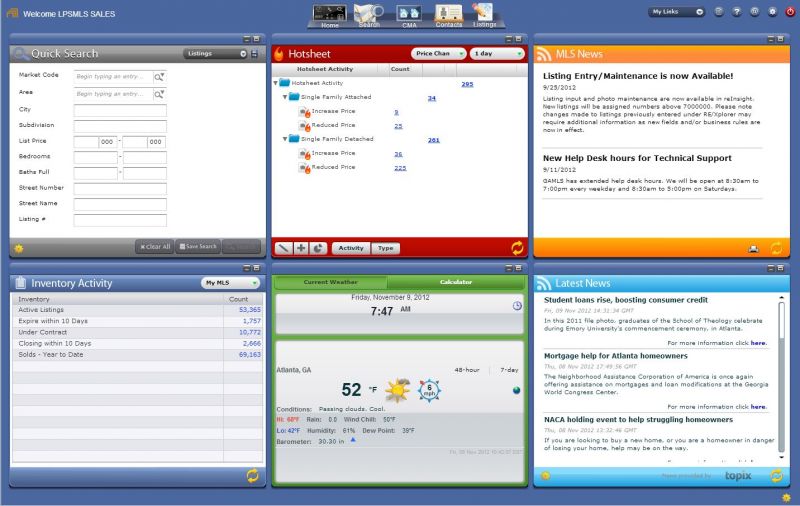 "With today’s graphical user interface, there’s no excuse for forcing people to go through multiple windows to look things up," Lull said. When agents do a property search, they want to see filtered results on the same screen, Lull said. 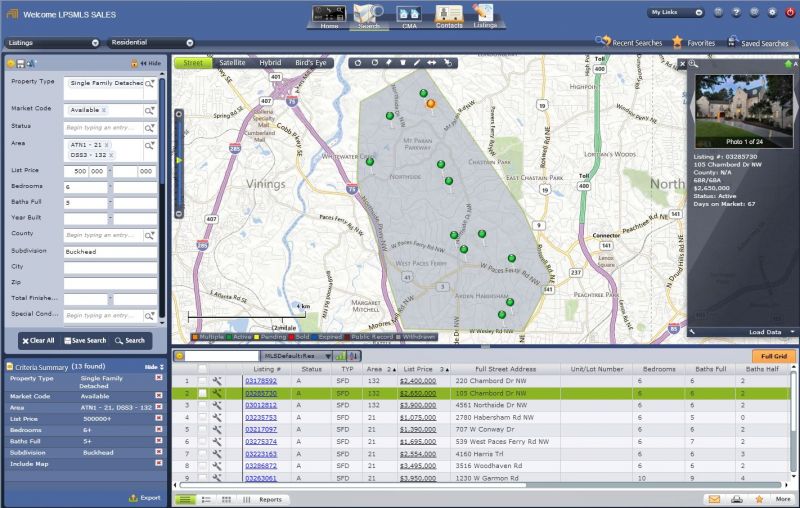 And searches return both MLS data and public records data. ReInsight allows MLSs to integrate their own public records sources or get public records from LPS. GAMLS, for example, has had a longstanding relationship with Knoxville, Tenn.-based records company Courthouse Retrieval System and continues to get most of its public records from that company, but uses LPS’ data to "fill in gaps," Lull said.

It’s "an asset for LPS to be able to extend the market for our public records data through our MLS system," he said.

In 2009, National Association of Realtors subsidiary Realtors Property Resource (RPR) acquired a technology platform for a national parcel-based database from LPS for $12 million. The companies signed a joint agreement in which they agreed to split any revenues generated from real estate analytics purchased by third parties from RPR. Thus far, RPR — which was projected to break even by this year — has cost NAR nearly $58 million and generated very little in analytics revenues for either RPR or LPS.

In terms of technical platform needs, MLSs can be divided into three segments, Lull said. The first tier consists of small to middle-market MLSs where cost and reliability are important and MLSs can be sure they will automatically get bug fixes and new enhancements every two to three weeks without having to ask for them.

These MLSs can suggest new innovations, but their suggestions will be prioritized in terms of what is best for all of the MLSs using that particular system, Lull said.

"We serve them with Paragon," he said, referring to the company’s signature MLS system. More than 200 MLSs and more than 165,000 real estate professionals use LPS’ Paragon MLS.

ReInsight aims to serve a second tier of MLSs: larger organizations that want to outsource their MLS platform but retain the ability to reach out and have their platform customized without having to deal with what other customers want, Lull said.

ReInsight may also potentially attract a third tier of MLSs, what Lull calls "the homegrowns": those that have built their own MLS systems.

"Someday, those guys are going to be looking for an outsource solution," but won’t want to compromise on customization, Lull said.

In the past three years, LPS has invested "multiple millions" in both reInsight and Paragon, he said. But, he added, no one type of system is better than the other — which system is best depends on an MLS’ resources and business strategy.

MLS systems also need to be able to to cater to varying types of users, from casual to sophisticated, he said.

But there’s a more rapidly growing segment of users that do take advantage of technology, Lull said, and they tend to spend more time on the MLS exploring the tools available.

Therefore, reInsight was designed to meet the needs of both: "Casual Charlie can get in and out, and Discerning Dave can spend hours and hours" on the platform, Lull said.

Lull declined to compare reInsight to a competing product for large MLSs from rival CoreLogic, Matrix.

"I will say that Matrix is a good system that goes back a number of years," Lull said.

Last Thursday, the Santa Fe Association of Realtors chose Paragon as its new MLS system. The trade group has more than 900 members. Its previous MLS system was provided by Rapattoni Corp.

"The mission of the Santa Fe Association of Realtors is to enhance members’ ability to conduct their individual business successfully and with professional competency. I feel that Paragon and LPS will assist our association in adhering to this mission," said SFAR CEO Paco Arguello in a statement.