At the behest of a local California Realtor association, the recently launched agent matching site HomeLight has pulled multiple listing service data from a Central Coast MLS previously displayed on the site.

The site launched out of beta on Nov. 14 with $1.5 million in funding in hand from Google Ventures (the venture capital arm of search giant Google), Crosslink Capital, Innovation Endeavors, and several undisclosed angel investors.

Cindy Doll, association executive of the Grover Beach, Calif.-based Pismo Coast Association of Realtors, said she contacted the San Francisco-based site last week after receiving complaints about the use of MLS data on HomeLight.com. The Pismo Coast AOR, which has about 650 members, is one of eight member associations that own the 2,806-member Central Coast Regional MLS (CCRMLS).

"After reviewing the site, I contacted the broker member and asked that he remove our MLS data that is being used to generate statistics, agent photos, etc., on his site because it fails to comply with our MLS rules," Doll said.

"Following my initial review, the site and his membership do not appear to be in compliance with the MLS rules, but I’ve not yet had an opportunity to make any further determinations. It will soon be carefully reviewed."

Doll said the broker member, Drew Uher, HomeLight’s co-founder and CEO, agreed to take down all of CCRMLS’ data from the site by end of the day Tuesday, with the exception of data provided by individual agents who had contacted HomeLight.

Doll said she told Uher that he was "not authorized to use the data to create this secondary product and therefore you need to take the data down." 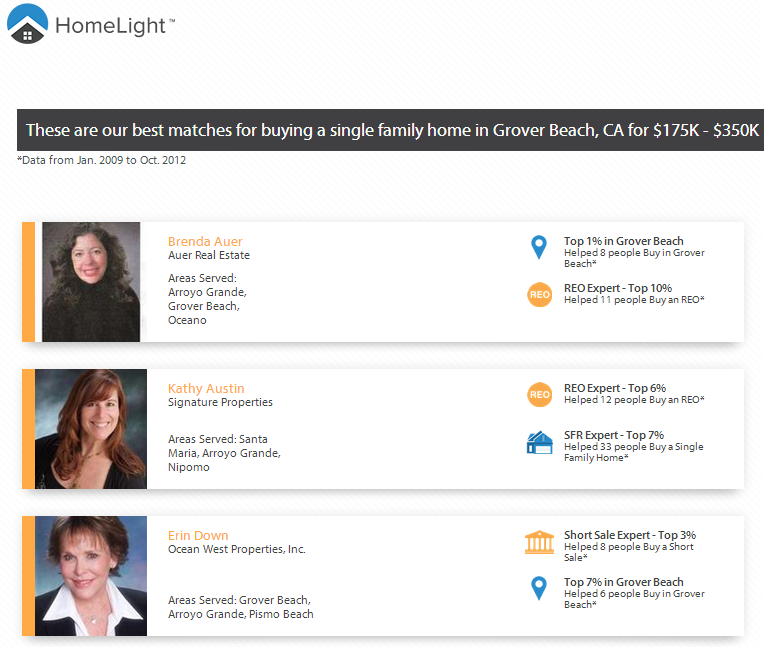 As of this morning, HomeLight had not stopped recommending agents in the CCRMLS coverage area, but had taken down agent photos and some transaction data. 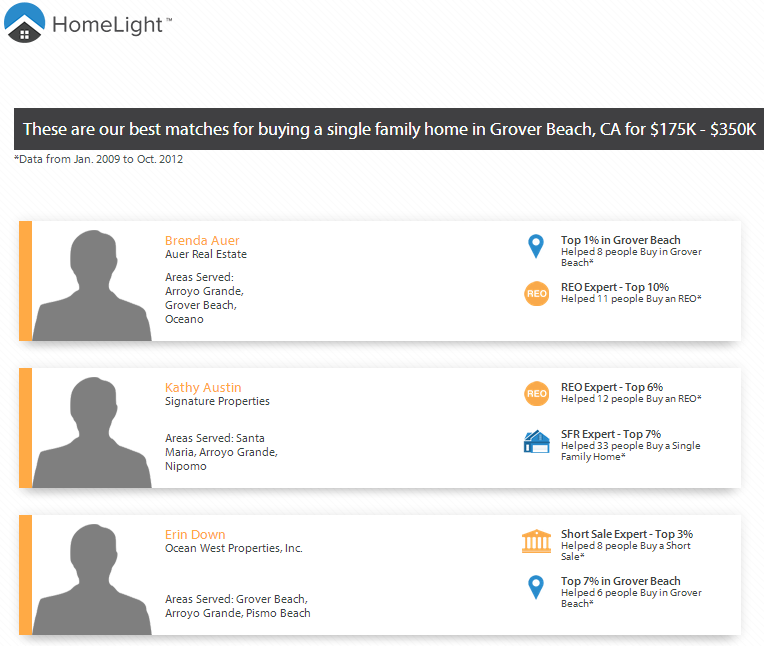 "We have made sure that we’re not displaying any transaction data or pictures sourced from their MLS. We’ve submitted an (Internet Data Exchange) agreement to them and are continuing to have a dialogue," Uher said.

"Our product benefits traditional agents (and therefore local associations) by allowing them to showcase their skills to the world. We are eager to work with MLSs and the rest of the industry to create a product that benefits everyone.

"But regardless of how MLSs respond to us, we can continue to operate. Since agents are eager to sign up for HomeLight, we can get data directly from them. Until now, we haven’t focused on agent sign-ups in the Pismo Coast area since it is a smaller market, but we expect to have the bulk of top agents in the area signed up by the end of the week."

This morning, Doll said she had not had a chance to see the changes implemented by HomeLight.

Last week, HomeLight stopped recommending agents in central and western Washington state after NWMLS objected to the site’s use of its MLS data without a licensing agreement in place.

First, although Uher is a broker member of CCRMLS, Doll is not sure he meets the definition of an eligible member, based on information in his membership application and guidelines maintained by the National Association of Realtors.

Secondly, even if Uher is qualified to be a participant in the MLS, he needs to apply for either a licensing agreement or an IDX agreement in order to display MLS data online or create a secondary product from the data, Doll said.

A 2008 settlement between NAR and the U.S. Department of Justice revised the definition of a qualified MLS participant to require that an individual or firm "offer or accept cooperation and compensation to and from other participants," or be licensed as an appraiser. Previously, the definition had required only that they "be capable" of offering or accepting compensation.

"Mere possession of a broker’s license is not sufficient to qualify for MLS participation," the definition now states. An MLS participant "actively endeavors during the operation of its real estate business to list real property of the type listed on the MLS and/or to accept offers of cooperation and compensation made by listing brokers or agents in the MLS."

When asked whether referral sites were eligible to be MLS participants, NAR’s General Counsel Laurie Janik said NAR’s position is that individual MLSs should make that decision.

"In order to qualify to be a participant in the MLS, a broker must actively endeavor to list or sell properties of the type listed in the MLS," Janik said. "The local MLS is in the best position to make that determination with respect to applicants."

"Even if a broker qualifies to be a participant, the MLS may adopt rules that impose reasonable restrictions on the broker’s use of the listings."

Doll said she has yet to make a final determination about Uher’s membership. Regardless, she said, membership does not authorize him to extract data from the MLS database.

She’s not sure how he’s extracting the data, she said, but authorization requires him to submit paperwork to access the data through the normal channels, either a Real Estate Transaction Standard (RETS) server or a File Transfer Protocol (FTP) account.

Doll declined to comment on whether she had received an IDX agreement from Uher.