Half of U.S. states saw an annual increase in the number of foreclosure-related filings in 2012, but most of those were judicial foreclosure states where loan servicers were catching up on the backlog from the "robo-signing" controversy, according to a year-end report by data aggregator RealtyTrac.

Half of U.S. states saw an annual increase in the number of foreclosure-related filings in 2012, but most of those were judicial foreclosure states where loan servicers were catching up on the backlog from the "robo-signing" controversy, according to a year-end report by data aggregator RealtyTrac.

All but five of the 25 states seeing an increase in foreclosure-related filings (default notices, scheduled auctions and bank repossessions) were states where courts handle most foreclosure proceedings.

Many foreclosure proceedings against homeowners in those states were stalled, but not derailed, by allegations that loan servicers failed to follow proper procedures in filing legal documents.

After loan servicers reached a settlement last March with state and federal officials last over so-called "robo-signing" practices and revised their procedures, they began pushing new and existing proceedings through the system again (many also started approving more short sales to meet their obligations under the terms of the settlement). 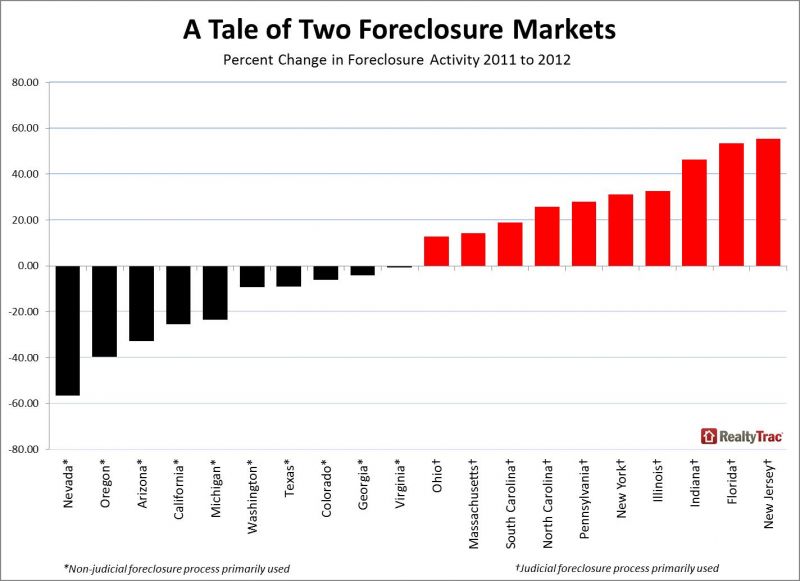 In the 25 states that saw foreclosure filings drop from 2011 to 2012, 19 handle most foreclosures outside of the court system, and  loan servicers in those states continued to move homes through the foreclosure process during the robo-signing controversy.

RealtyTrac warned there could be a foreclosure backlog building up some states that saw filings decline in 2012, as the result of new state legislation and court rulings that make it more difficult for lenders to foreclose.

So 2013 could see "two discrete jumps in foreclosure activity," at the beginning and end of the year, said Realty Trac’s Daren Blomquist.

"We expect to see continued increases in judicial foreclosure states near the beginning of the year as lenders finish catching up with the backlogs in those states, and another set of increases in some nonjudicial states near the end of the year as lenders adjust to the new laws and process some deferred foreclosures in those states."

The rise in foreclosure activity in many local markets in 2012 "should translate into more foreclosure inventory available for sale in 2013 in those markets," Blomquist said. "That is good news for buyers and investors, but could result in some short-term weakness in home prices as the often-discounted foreclosure sales weigh down overall home values" in those markets.

Zillow is projecting that a half-dozen markets in California, including some Central Valley cities hard hit by foreclosures, will see double-digit home price aprreciation in the months ahead. The real estate portal’s analysis of more than 250 markets predicts that national home prices will appreciate 2.5 percent in the year ending November 2013.

"The U.S. housing market bottomed in the fourth quarter of 2011 and has since entered a sustainable recovery," Zillow Chief Economist Stan Humphries said in a blog post.