Bolstered by low inventories, the national median existing-home price was up 11.5 percent from a year ago in December, to $180,800. December saw the 10th consecutive month of year-over-year price gains, a trend not seen since May 2006.

At 1.82 million units at the end of December, existing-home inventory now represents a 4.4-month supply, the lowest level since May 2005, near the peak of the housing boom.

"Likely job creation and household formation will likely fuel (market) growth," said NAR Chief Economist Lawrence Yun in a statement. "Both sales and prices will again be higher in 2013." 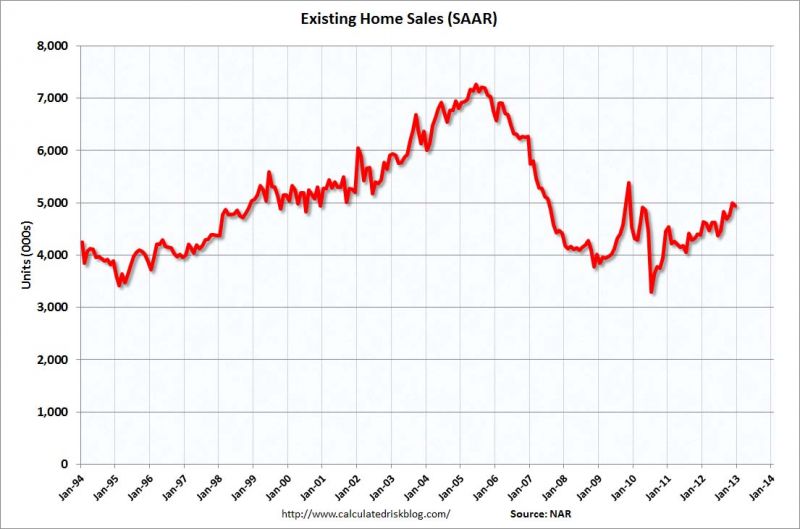 A survey by the National Association of Home Builders (NAHB) released today showed builder confidence holding steady in January at the highest level since April 2006.

"Conditions in the housing market look much better now than at the beginning of 2012, and an increasing number of housing markets are showing signs of recovery, which should bode well for future home sales later this year," said NAHB Chairman Barry Rutenberg in a statement.

Existing-home sales, which make up about 90 percent of total home sales, slipped 1 percent from November to December, to a seasonally adjusted annual rate of 4.94 million units.

First-time buyers accounted for 30 percent of purchasers in December, unchanged from November.

Regionally, the Midwest led the way with a 15.5 percent year-over-year increase to an annual pace of 1.12 million units and a median price of $144,800, up 12.3 percent from last December.

In the West, sales were up 8.8 percent from a year ago to an annual rate of 1.23 million units in December, and the median price jumped 17.3 percent from last December to $239,900, the largest yearly proportional price jump of any region.