Realtor.com has rebranded with a new logo, slogan and website design that the listing portal’s operator, Move Inc., hopes will "bring sentiment and warmth to our best-in-class data" and help consumers "connect emotionally" to the site, which has lost ground to competitors Zillow and Trulia.

Move operates Realtor.com under the terms of a 1996 agreement with the National Association of Realtors. The new Realtor.com logo and website design downplay the site’s ties to NAR.

For years, until last year’s relaunch, the Realtor.com logo featured NAR’s "block R" Realtor, and a prominent declaration next to the logo informed users that the listing portal was the "Official Site of the National Association of Realtors."

The new Realtor.com logo makes no reference to NAR (although the term "Realtor" itself is a NAR trademark), and features a new slogan, "Where home happens."

Fine print at the bottom of the page — displayed in a light font that blends in with the background — notifies visitors that Realtor.com is "the official site of the National Association of Realtors and is operated by Move Inc."

Before the relaunch, Realtor.com devoted a significant portion of its home page to a "National Association of Realtors" section that included more than a dozen links taking visitors to several NAR websites, including HouseLogic.com, Realtor.org and Realtoru.com. 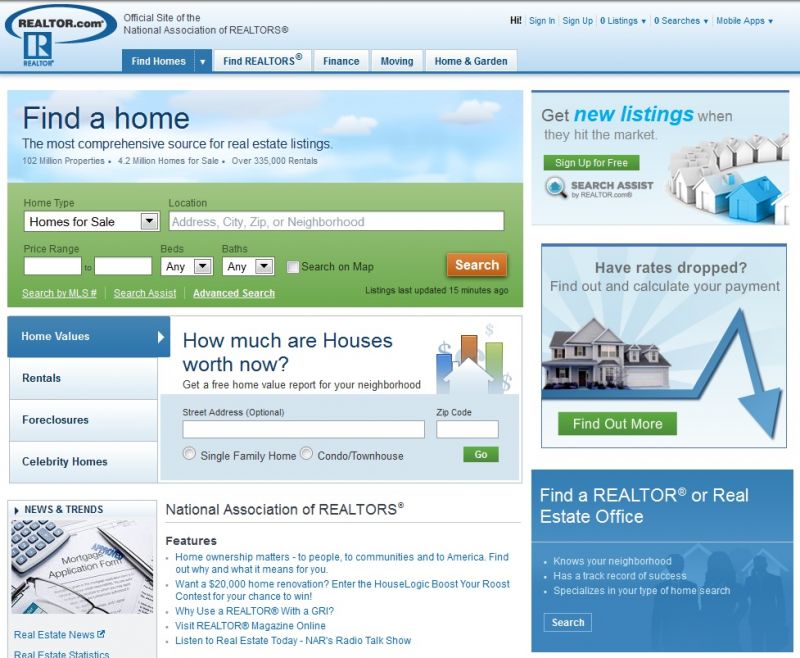 Screen shot of Realtor.com home page as it appeared on July 17, 2012, when crawled by the Internet Archive’s "Wayback Machine." Source: Archive.org.

The new site also includes a NAR section, but offers only a half dozen links and takes up a much smaller portion of the home page below the fold — it’s not visible unless users scroll down to it.

The new spherical logo featuring a simple outlined house image, tilted up and to the right as if it’s blasting off, and slogan "Where home happens," are both registered trademarks of NAR.

NAR Senior Vice President Bob Goldberg said in an email that the association was involved in the rebranding process, and that he’s "very happy with the result."

Andrew Strickman, Move’s vice president of creative and brand, said in a statement that the goal of the rebranding was "to draw a much stronger connection between realtor.com and the people that fuel its service — both consumers and Realtors."

"Most online real estate brands feel clinical, data- and machine-driven, and do not have a human feel, even though they are all about creating connections with real human beings," Strickman said in a statement posted by the consulting firm WAV Group.

"All I can say is watch out, we have the best mobile apps, the accurate content and we are going (to) shout about it," tweeted Move CEO Steve Berkowitz today.

The industry’s first take on the rebranding has been largely positive.

"’Whoa!’ was my first reaction. Lowercase typeface, new color scheme, simply clean look and feel," wrote Greg Robertson on his popular industry blog Vendor Alley. He closed the post with, "So overall I have to say I love it. Looks like a promise of some great things to come."

"Pretty slick! Slider is off center. More white space & variation in text. Some areas feel too tight," said graphic designer Ryan Wheaton in a Twitter post. "But … I really like the look and feel overall," he wrote.

The new logo itself has also been knocked.

"EEhhh … not really crazy about it. And what’s up with the lowercase spelling of REALTOR??" wrote Texas-based Re/Max agent Ryan Bokros in a comment on a Facebook post about the new design.

"Housing has been set on its ear? That’s what it says to me," wrote Rani Covington, a Re/Max agent in Fairfax, Va., in another comment to the same Facebook post. "Without any explanation, I wouldn’t have a clue this is related to REALTORs,"

Others pointed out what they characterized as the logo’s dull colors, and one commented that it looked like a "home-spaceship."

Some, like Mike Goodwin, an agent with EXIT Realty in Naperville, Ill., said they liked the modern look.

Barbara O’Connor, executive vice president of marketing at Move, said reaching consumers is about emotion, which explains the first-ever use of a tagline and the logo’s teal color, which she said represents credibility, authority, money and prestige.

O’Connor said connecting the Realtor.com brand with consumers was part of her mandate when she was hired in July.

Move is both blessed and challenged by its relationship with NAR. Thanks to the site’s ties to NAR, Realtor.com receives listings directly from nearly all of the nation’s multiple listing services, giving the portal the right to claim the Internet’s most complete, up-to-date inventory of homes for sale.

But the Realtor.com operating agreement gives NAR veto power over many of the changes that Move might want to make to the site.

When Move renegotiated the Realtor.com operating agreement with NAR in 2010, it was granted more leeway to make changes to the features, design and layout of the site and its user interface without obtaining prior approval from NAR.

Realtor.com has lost Web traffic market share to Zillow and Trulia, though it still holds the No. 3 spot in mobile and desktop real estate Web traffic.

"NAR needs to realize that MOVE is in the fight of their lives," wrote Greg Robertson in a another post at Vendor Alley, about the restrictions in the Realtor.com operating agreement.

In renegotiating the Realtor.com operating agreement, Move also got the go-ahead to run lead forms for buyer’s agents alongside of listings, which, like the ads for agents that appear on Zillow and Trulia, some brokers object to.