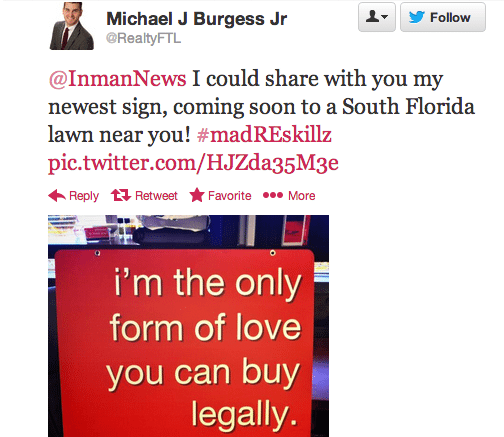 When 24-year-old Michael Burgess first became a real estate agent, he drove around the streets of Fort Lauderdale, Fla. to see how other agents were advertising their listings to passersby.

Nearly all the for-sale signs Burgess (@RealtyFTL) saw seemed to cleave to a staid model that had just three features, he said: A head shot from 1996, the words “for sale,” and a phone number.

Sensing an opportunity to set himself apart from other agents, Burgess resolved to create signage that would turn heads and never elicit yawns, he said.

“If I wanted to get noticed and have a chance at a successful real estate career, I needed to do something differently,” Burgess said in an email. “I wanted to reflect a personality, a feel that real estate could be enjoyable and fun!”

One of his latest signs, the winner of last week’s #madREskillz contest, represents an audacious attempt to execute on that strategy.

“I’m the only form of love you can buy legally,” reads the promotional sign he recently designed and tweeted last Thursday.

In addition to walking the line between sensational and lewd (or perhaps even passing over it), the sign’s QR code — which allows people to scan his contact information onto their phones — and lower-case font also stamp it as distinctly contemporary.

Though Burgess hasn’t deployed the sign yet, he said that clients and customers have reacted positively to other edgy promotional materials that he’s used in the past.

But he acknowledged that a sign that alludes to prostitution may rub some people the wrong way.

“This sign isn’t for everyone, and I know that there are very specific geographic and demographic variables that I will need to take into account before hanging this sign in someone’s front yard,” he said.

Do you think Burgess’ sign crosses the line? Sound off in the comments section below.