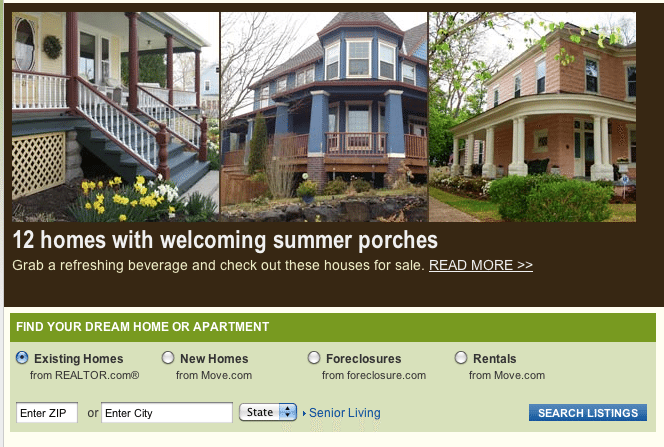 Under the agreement, Move will continue to power MSN Real Estate’s listings from a variety of databases — existing homes for sale from realtor.com, new homes and rentals from Move.com — and the two firms will share editorial content related to homebuying and renting. MSN Real Estate gets foreclosures from foreclosure.com, which is not a Move property.

MSN Real Estate had 7.1 million visits from desktop computers in the U.S. in May, representing 1.56 percent of all real estate-related Web traffic that month, according to data from Experian Marketing Services.

“We know that Microsoft had a number of choices in online … partners and are pleased to announce our continued long-standing relationship with MSN to deliver the most accurate and trusted real estate information to the MSN community,” said Barbara O’Connor, executive vice president of marketing for Move, in a statement.

“In a nutshell, what Barb is saying, is Move Inc. won the business from Zillow,” wrote Greg Robertson, an industry insider who runs the real estate software firm W&R Studios, on his blog at Vendor Alley.

Zillow has a similar arrangement with Yahoo’s real estate site Yahoo Homes, the fourth-most visited real estate-related website in the U.S. in May with 24 million hits representing a 5.24 percent Web market share, according to data from Experian.

Taken together, the “Yahoo-Zillow Real Estate network” accounted for 17.66 percent of U.S. Web traffic from desktop computers to real estate sites in May, according to Experian data.

Move has a similar network. In addition to powering listings at MSN Real Estate, the San Jose, Calif.-based firm syndicates a separate set of listings to AOL Real Estate through its ListHub subsidiary. Desktop Web traffic to Move’s network accounted for 8.32 percent of all real estate-related visits in the U.S. in May, according to Experian data.

Editor’s note: A previous version of this story indicated that foreclosure.com was a Move Inc. property, which is not the case.