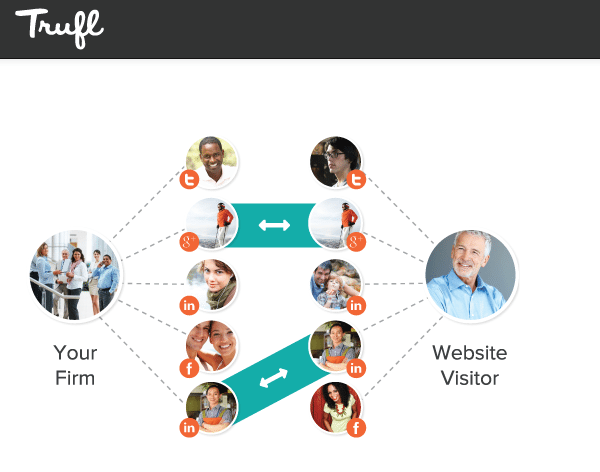 Toronto-based startup Trufl has a new twist on a concept pioneered by SocialBios, providing a website plug-in for brokers and agents who build trust with prospects by revealing shared social media connections.

Trufl’s social graph tool can be embedded on any website as a thin, horizontal box that surfaces a visitor’s overlapping social media connections with the site’s owner from Facebook and LinkedIn when they click the respective buttons and grant the tool access to their contacts. Twitter and Google Plus capabilities are coming soon.

Trufl charges users a $19 start-up fee. A free version allows brokers and agents to tag their social media contacts as “personal,” “business” or “past client,” and sends them a daily email showing who’s visited the site.

Users can also select connections they don’t want the tool to bring up, giving some control over which shared connection a visitor might reach out to.

For $9 per month, users get access to deeper analytics, including email addresses of visiting users, their Facebook and LinkedIn pages, how they may be connected via social media and how long they stayed on the site.

Trufl also offers an office-centric product that shows which agents at a firm have connections to Web visitors. Three offices are currently using that product, Sylvester said.

The idea for the tool grew out of an experience with Commission Pitch, a now-defunct real estate startup that Sylvester and Trufl co-founder Paul Sobocinski launched in January.

Commission Pitch was a “reverse auction platform for Realtors,” Sylvester said, a place where agents could compete for consumers’ business based on lowering their commission rates.

Commission Pitch was aimed at servicing the booming discount brokerage market in Canada. But Sylvester and Sobocinski found that only a small percentage of agents wanted to compete on price on the platform. Consumers didn’t show much interest, either, and the site failed.

They began to let go of Commission Pitch in July with their acceptance into Kitchener, Ontario-based startup accelerator Hyperdrive. As Commission Pitch was failing, interviews of more than 200 agents and consumers revealed that trust was the most important element in an agent-client relationship.

“Trust is the No. 1 reason consumers choose an agent,” Sylvester said. “Price is not.”

Trufl keeps potential clients from jumping from website to website, Sylvester said. Instead, users can see right away how they’re connected to an agent by clicking on the Trufl plug-in that resides on the home page, which will show them right away if they have connections.

By surfacing social connections between agents and consumers, Trufl strongly resembles SocialBios, a social connection platform that Move Inc. bought in 2011. SocialBios launched as a way for website visitors to see how they were connected to a website owner through social media, said SocialBios founder Ernie Graham, who continues to oversee the technology as an employee of Move.

SocialBios’ social search tool shows how visitors are connected to agents via Facebook, Twitter, Foursquare, Google Plus and LinkedIn on realtor.com agent profile pages on the Web and its mobile app, and via a separate plug-in that can be embedded in websites.

Graham said the idea came to him five years ago when he was a real estate agent. One day, watching how his brokerage distributed leads, he decided to follow a lead from the operator.

The lead went to another agent, and Graham overheard that the prospect owned a car dealership in Scottsdale, Ariz. Graham knew that the parents of another agent at the brokerage also owned a car dealership there. There would have been a much stronger connection between agent and prospect if the agent with roots in Scottsdale had been given the lead.

Graham thought that there must be a better way to match up a lead and an agent, and SocialBios was born.

Currently free and still officially in beta, SocialBios has since expanded to become a reputation management tool. Over the last two years, Graham said his team has found that simply bringing connections to light isn’t enough to get consumers to engage with an agent.

Recommendations appear to be even more powerful at establishing working relationships than presenting direct connections, he said. SocialBios allows users to “like” agents on Facebook or give them a “+1” on Google. The tool allows agents to broadcast the social media reviews automatically.

Graham said both sides are important — establishing trust with visitors by showing the connections they share with an agent, and surfacing reviews that give a sense for how the agent works.

But website visitors are often wary of allowing a tool to access their social media contacts, he said, something that “will always be a stumbling block to getting mass usage of this feature,” Graham said.

About 34,000 agents have enabled the SocialBios’ social graph feature, now known as HyperSocial, on their realtor.com agent profiles, Graham said. Move has plans to launch the tool more prominently in the future, he said.

“It validates what we’re doing,” Graham said of Trufl’s entry into the space.

Sylvester, too, said that Move’s involvement with the technology validated its importance. He says he hopes to make it more widely available to brokers and agents.