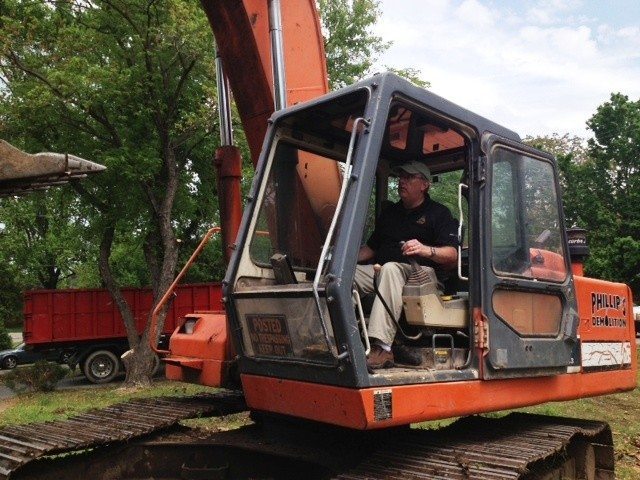 For years, John G. Brittle Jr. had been telling his team of agents that one day he would try his hand at a backhoe on one of the redevelopment projects that they oversee.

Last May, he was finally able to make good on his word. Under the supervision of a demolition team, the broker hopped onto an excavator and gleefully bashed in the roof of a home on a site that was being redeveloped.

“I had always wanted to tear one down,” he said about the homes that he helps investors find, knock down, develop and sell. “I guess some big kids like smashing things up.”

That wasn’t the first time Brittle, who heads up Infill Nashville, an agent team at Nashville, Tenn.-based brokerage Village Real Estate Services, had tested a piece of construction equipment.

He and his team, winners of Inman News’ latest #madREskillz contest, are always looking to get their hands dirty. Their unique approach to representing buyers and sellers demands it.

Infill Nashville specializes in sniffing out properties with redevelopment potential, cooking up deals, and then handing them on silver platters to investors. After brokering deals, Infill then manages their development and marketing.

The development that was the scene of Brittle’s backhoe experience illustrates the way the broker turns a profit. After recognizing the property’s potential, Brittle persuaded its owner to sell it for $450,000, he said.

Brittle said he then took the purchase opportunity to a developer who signed a contract to buy it for that price — if Brittle could succeed in rezoning the property. Brittle did just that, getting approval to subdivide the lot into three properties, and closing the deal, he said.

Brittle then oversaw the work of contractors as they demolished the home and began to erect three new ones. Each day, at least one member of his team drops in to evaluate the status of every project that Infill Nashville manages, and snap photos of it so the team can report its progress to the property’s investor, Brittle said.

In order to keep a pipeline of deals flowing, Infill Nashville agents must pound the pavement and get their hands dirty, Brittle said.

They relentlessly canvas neighborhoods, sniffing out properties with development potential and knocking on doors to gauge interest in selling, he said. In 2013, Infill Nashville’s team of eight helped buy, develop and sell nearly 69 properties worth about $40 million, according to Brittle. He said that 40 of the homes that Infill Nashville helped sell were never even listed on the local multiple listing service (MLS).

“We’re coming to find you,” he said of trawling for potential sellers. “We’re stalking you, honestly,” he said.

The unit also has special knowledge of the rezoning process that enables them to efficiently obtain approval for projects on behalf of their investors. And it takes the work of actually managing the development site out of the investors’ hands, supervising contractors and reporting progress to investors.

“We don’t pretend to be general contractors but we’re usually at the site more than the general contractor,” he said. “What we’re really acting as is the broker for the developer and if I’m the guy who has to know; I want to know what’s going on.”

To offer another level of transparency to its developers, Brittle said Infill Nashville plans to install security cameras that will live stream video of every construction site 24/7, joining some real estate crowdfunders — which pool capital from multiple investors for the purchase of properties — in employing the practice.

For kicks as well as education, agents are encouraged to try out construction equipment and machinery, Brittle said. “Anything that comes onto a construction site, we try it.”

Among other equipment, Brittle has tooled around with trench-digging machines, stump grinders and super-sized chainsaws. On the same home he smashed with a backhoe, contractors, at Brittle’s instruction, felled a tree in such a way as to bring it crashing down onto the home. (See the video below.)

Brittle said he markets himself partly by capturing these antics. He said he posts photos or video of the experiences to his Facebook page, keeping him top of mind with contacts he’s connected to on the social media site.

“My friends know I don’t know how to drive backhoe and they’ll call me up … they’ll say JB, ‘Did you kill anybody on that the other day?’”

Brittle also snaps photos of any quirky or unusual things — like outhouses, funky murals, hit-and-run reward signs, and pump toilet instructions — he encounters while scoping out neighborhoods, and then posts them in his quarterly “Funky Nashville Realty Photos” albums on Facebook.

In Boston, infill development is all about the 'air rights'
Back to top
TOMORROW: Leaders from eXp, Corcoran, RE/MAX, The Agency, and more are speaking virtually at Connect Now. Listen or watch live + receive the replays.Register Now×
Agent Appreciation Sale: Inman Select for only $85.CLAIM OFFER×
Inmanpot
Log in
If you created your account with Google or Facebook
Don't have an account?
Create an Account
Forgot your password?
No Problem