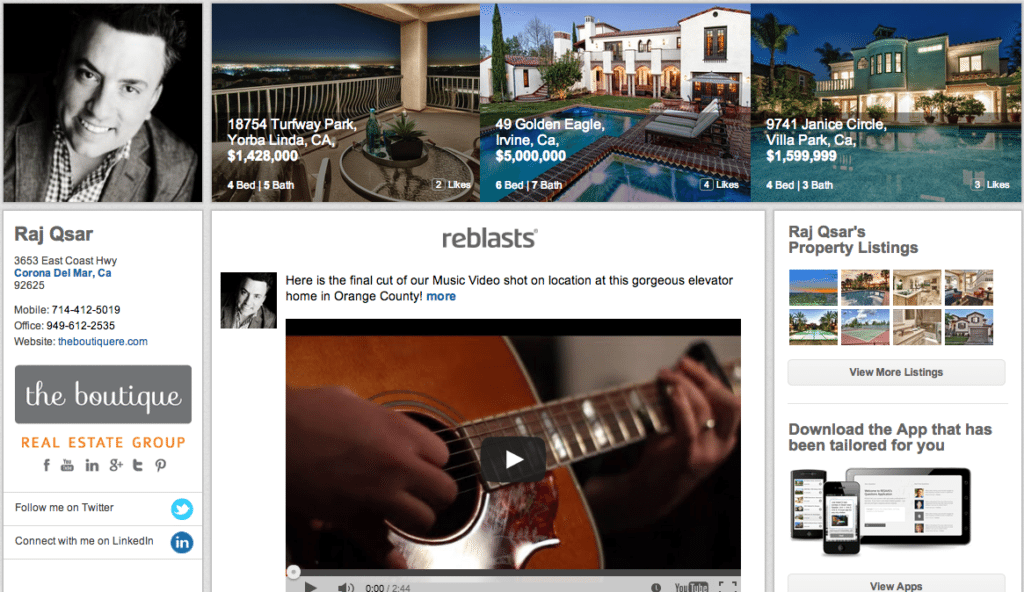 If you’ve been following the real estate industry for the past year, you’ve probably seen the RESAAS name, either at a trade show or through a press release, and maybe you’re wondering what it is.

Founded in 2009, RESAAS, which stands for “Real Estate Software as a Service,” launched out of beta last February and is building what it hopes will be the social network for real estate.

The Vancouver-based public company claims tens of thousands of agents in North America and Europe have joined the platform so far.

In order to build up the agent count on its platform, RESAAS also powers, at no charge, white-labeled, branded, internal communication platforms for a growing number of brokerages, organizations and associations. Clients include a leading Canadian-based brokerage, Sutton West Coast Realty; Orange County, Calif.-based The Boutique Real Estate Group; the Asian Real Estate Association of America (AREAA); and the Fox Valley (Ill.) Association of Realtors.

Three state Realtor associations will be joining the platform soon, and the firm has a couple of large deals pending with U.S.-based international firms that will propel the network’s international growth, Rossiter said.

RESAAS had a coming-out party of sorts in 2013.

RESAAS functions much like Facebook or Twitter, with a real estate twist. Both agents and groups can have a page, and RESAAS vets all users to make sure they’re actually agents, though consumers can participate in the platform in some ways, too.

Agents’ pages show their photo in the upper left portion of the page and a centrally located activity timeline, resembling Facebook’s wall or Twitter’s stream, where they publish posts RESAAS calls “reblasts.” They can choose to link the timeline to their Facebook, Twitter or LinkedIn pages, which allows agents to “reblast” their RESAAS posts to the other networks. (See The Boutique Real Estate Group agent Michele Chiu‘s page as an example). 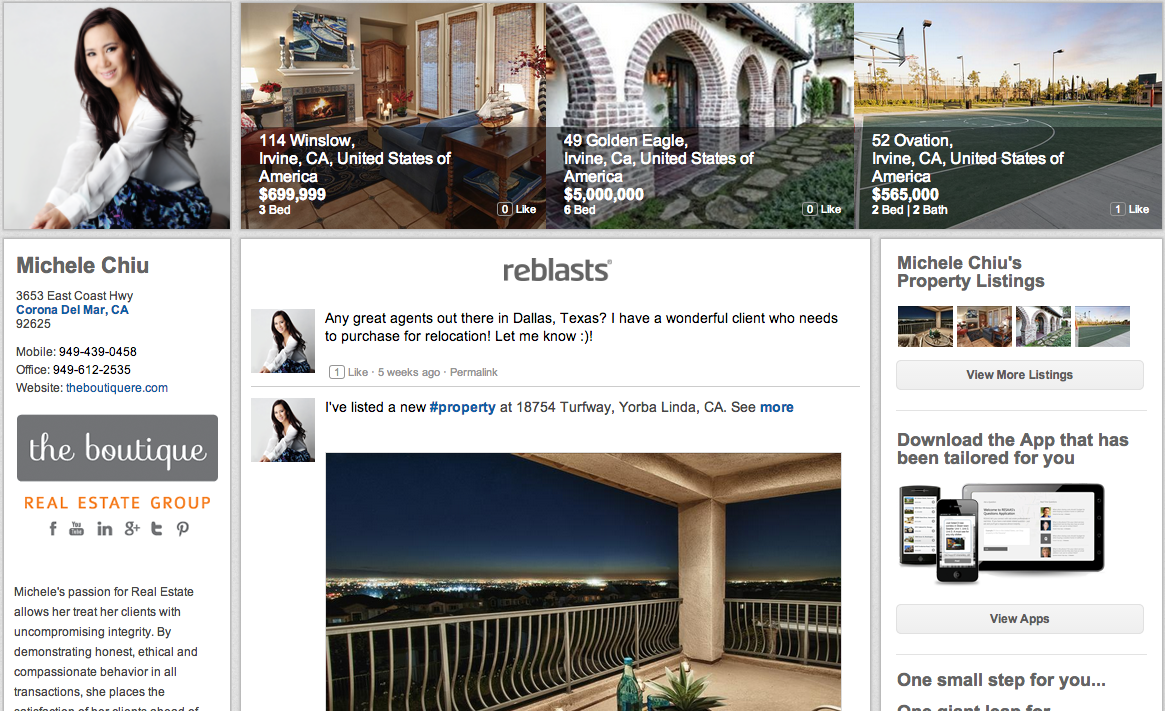 Featured listings, which agents enter and update themselves, show up across the top of the page, and their contact info and bio show up along a column running down the page’s left side. A right column includes links to all of the listings agents have uploaded to their RESAAS account.

RESAAS business pages have a similar look, but they feature the firm’s or group’s logo in the top left of the page, instead of the agent’s photo, and a set of featured listings across the top and a centrally located activity timeline. (See The Boutique Real Estate Group page for an example.)

Agents who have an account and are signed into the platform can participate in posts by “liking” or commenting on them and can see which public and private RESAAS groups the agent whose page they’re looking at is a part of.

Consumers see RESAAS pages slightly differently. They can neither “like” nor comment on any RESAAS posts. Consumers can see agents’ contact info and bio, and if they create a consumer account, they can ask specific questions of the RESAAS community and contact agents through the platform. But that’s the extent to which they can participate in the platform.

Late last year, RESAAS released a “mockumentary” featuring some high-profile leaders in the industry, including Nobu Hata, director of digital engagement at the National Association of Realtors, and Vancouver-based agent Tina Mak.

“The timing is right with these guys,” said Hata, who joined RESAAS’ new advisory board earlier this month.

NAR has no formal role in the platform, but Hata says the association used the platform to broadcast its annual convention content to all the private groups on the platform, helping to generate a record number of views.

As a member of both AREAA and the Fox Valley Association of Realtors — two of the first organizations to sign up with the RESAAS platform — Hata says he accepted the offer to join RESAAS’ advisory board in the hopes of helping the platform grow responsibly. He sees the platform as an avenue for agents to engage in “actionable networking,” and is monitoring activity to see how agents use it.

Brandolini, who had a 25-year-long career as a commercial banking salesman, founded the firm to facilitate networking among real estate agents, a group he felt was underserved by the networking tools available at the time.

Networking was the key to his success in banking, Brandolini said. The quicker he could network, the quicker he got business.

After verifying their identity through license information or brokerage affiliation, RESAAS helps agents generate referrals and eventually communicate with consumers. First, the firm will build up the network to a critical mass of agents, whom it is targeting through the brokerages, associations and organizations they belong to, Brandolini said.

Groups, and agents, use the platform in different ways, Brandolini said.

Vancouver-based Sutton West Coast Realty, one of the largest firms in Canada with 21 offices and more than 1,700 agents, signed up with the platform in early February to communicate with members — through the free, white-labeled internal communication platform RESAAS offers to real estate groups — and to the agent community at large, said Curtis Cottrell, the brokerage’s vice president of communications.

The Boutique Real Estate Group, which signed up for the platform last November, uses it primarily to gain awareness in overseas markets, said the firm’s founder and owner, Raj Qsar.

His 25-agent firm hasn’t been using the internal communications feature so far, Qsar said, but it’s posting two to three items — like new listings, open house info and hyperlocal market stats — to its RESAAS page each day, just as it does to its Facebook business page, Twitter and Instagram.

On their individual RESAAS pages, agents like Michele Chiu post their listings, referral requests and other info.

Since using RESAAS, Qsar says traffic to the firm’s website has gone up 10 percent. International traffic, too, has seen a bump, he said.

“A lot of real estate agents are active there who I am not connected to in any other channel,” Qsar said.

RESAAS offers the opportunity for agents to have conversations that are a little more private than generally found in Facebook groups, he said. He’d like to see it develop so that agents could find each other by geography, brokerage and group.

Eventually, Brandolini envisions that consumers will be able to access the platform to find information about listings and agents from a real estate pro’s perspective in many markets across the U.S. and overseas.

RESAAS went public in 2011 but hasn’t generated any revenue since its inception in 2009. According to financial reports filed with Canadian securities regulators, the company posted a $4.65 million net loss for the first nine months of 2013, up from $1.36 million during the same period of 2012, bringing the company’s cumulative deficit to $9.8 million (those figures are all Canadian dollars). A significant jump in stock-based compensation and “general and administrative” expenses accounted for the bulk of the increased net loss.

RESAAS plans to generate revenue from two sources, Brandolini said. The firm will begin rolling out premium features that agents can purchase on an a la carte basis in late spring, and will eventually begin selling display ads.

Premium features will include analytics that show agents who has viewed their RESAAS page, the opportunity to enhance their brand on their RESAAS page, and an ad product — “AdSAAS” — that will automatically generate ads on platforms like Google, Facebook and LinkedIn.

RESAAS to power Asian Real Estate Association of America's social network
Back to top
Inman Connect Las Vegas Memorial Day sale – 44% off exclusively for Select subscribers!Register Now To Save×
Limited Time Offer: Get 1 year of Inman Select for $199SUBSCRIBE×
Inmanpot
Log in
If you created your account with Google or Facebook
Don't have an account?
Create an Account
Forgot your password?
No Problem