With the acquisition of Trulia finally in the bag, Zillow’s share price soared more than 20 percent in heavy trading this afternoon as the company begins to take steps — including trimming its workforce — that will help it fully realize cost and revenue “synergies.”

The jump in share price pushed Zillow’s market cap back above the $5 billion mark, and it still may have room to run. After Zillow announced its plan to acquire Trulia back in July, shares in the company hit an all-time high of $164.90. 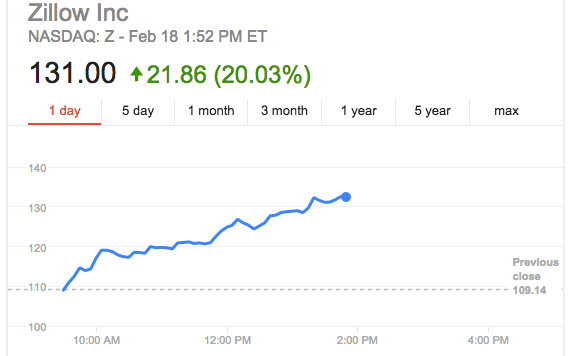 Last summer, Zillow predicted it would achieve $100 million in cost “avoidances” in 2016 by combining the two companies.

In a note to investors this week, Deutsche Bank analyst Lloyd Walmsley noted opportunities for Zillow to achieve nearly $150 million in “cost synergies” — spending cuts that will be largely achieved by cutting workers in areas where the two companies have redundancies, such as general administration, sales and marketing, and research and development — this year and next.

The newly formed Zillow Group has already let 280 workers go, mostly in San Francisco where Trulia was headquartered, and also in Bellevue, Washington, the headquarters of Trulia’s Market Leader division. Another 70 jobs are expected to be cut by the end of June, at which point Zillow Group expects to employ about 2,000 workers.

Zillow management held a call this morning with investors to discuss the acquisition, which closed Tuesday, but did not provide updated guidance on the costs and savings they expect to see as they bring Trulia into the fold.