When Zillow fully absorbs Trulia sometime later this year, brokers and agents will buy one set of ad products that will show up across the two sites — and also on Zillow’s partner sites, as well as its other consumer brands, where applicable.

Broker and agent ads will show up across both Zillow and Trulia and the host of sites Zillow powers, including Yahoo Homes, AOL Real Estate, MSN Real Estate, HGTV’s FrontDoor and the Chinese portal Leju, Zillow Group CEO Spencer Rascoff explained this morning on an investor call.

Rascoff also detailed how some of the differences between Zillow’s and Trulia’s ad products will largely disappear as Trulia is absorbed into Zillow Group, the new entity that houses all of Zillow’s brands. For the most part, Trulia’s ad model will melt away and become like Zillow’s, he said.

Zillow, like Trulia, makes most of its money off of selling impressions to agents on listing and home detail pages.

Unlike Zillow, Trulia sold advertising to brokers and agents by share of voice, guaranteeing them a certain percentage of a ZIP code’s total impressions in any given month. It also sold distinct ad products for both Web and mobile.

However, Zillow has yet to decide on how to how to handle another difference between Zillow’s and Trulia’s ad products.

Zillow preselects none or just one agent to receive the lead on the agent contact form that shows up on its listing detail pages of the three or four agents who show up. Consumers must select a check box next to each agent’s name to send the contact to an agent or to more than one. 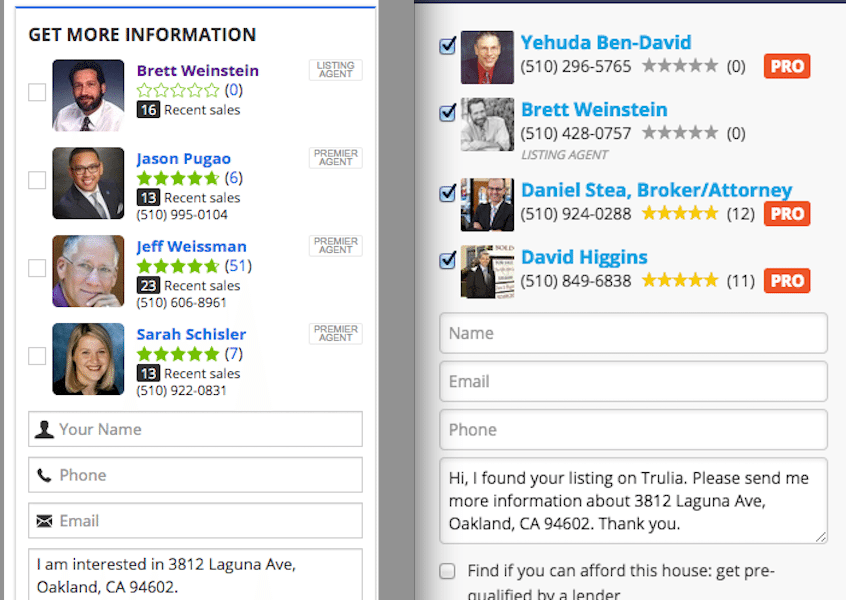 Trulia, on the other hand, sends a lead to all three or four agents by default when a consumer requests more information on the contact form on listing detail pages. Consumers have to deselect agents in Trulia’s form if they don’t want them to be contacted.

Rascoff said that Zillow Group will evaluate the two scenarios and make a decision later in the year.

Listing brokers sometimes derisively refer to the contact forms employed by Zillow and Trulia as the “three headed monster,” because the photos and contact information for up to three competing agents may appear.

Homes.com has just rolled out its own branded contact forms, which it claims are more friendly to listing brokers and agents because inquiries are always routed to them — consumers can’t deselect the listing agent.

In changes to its Connection for Co-Brokerage ad product last July, realtor.com began sending leads to multiple agents on a portion of the contact forms on its listings. Agents can pay more to receive exclusive leads on realtor.com listings, which up until that change had been the default.

Rascoff also provided some insight into how Zillow thinks about ad pricing on the call.

Zillow’s agent ad revenue goes up when it has more agents paying for subscriptions, when existing agent advertisers spend more or a mix of both.

One can only guess what percentage Zillow is targeting its business toward.

As he has said many times before, Rascoff told Inman that Zillow plans to raise prices only as long as its advertisers still realize a positive return on investment.

“The number of subscribers in (a city) and the amount that they spent per month is secondary to what the (total) commission dollars that we generated in a given city in a given month were and how much money we made to help generate those commissions,” Rascoff said on the call.