The North American cloud-based brokerage eXp Realty International Corp. has taken its virtual lifestyle to a new extreme by investing six figures in the creation of a new virtual headquarters and meeting environment, where it will hold tech trainings for its agents and invite others to attend.

The Bellingham, Washington-based brokerage has agents in 30 states and two Canadian provinces, but it has no brick-and-mortar offices, and that’s where its new “RETechCampus” initiative comes in.

The new campus, which has been live for eXp Realty agents for about a month and launches to the real estate community at large today, is nestled in a glimmering outdoor world that features an open-air amphitheater that seats 80 to 100 people, various indoor meeting spaces and five rooftop conference areas with views of a virtual ocean in the distance.

As other real estate firms wrestle with designing offices of the future to house staff and agents, eXp Realty is betting on a virtual future with no monthly lease payments, other than what it pays for server space.

In addition to a new virtual headquarters for eXp Realty, where company executives hold meetings, the campus features tech training workshops for its agents, many of which are open to any agent who wants to join to attend regardless of brokerage affiliation. Non-eXp Realty agents are also free to use the world’s meeting spaces.

The firm hopes to attract new agents by opening up the new world to all real estate pros, Brad Andersohn, eXp Realty’s relatively new director of education and industry outreach, told Inman during a recent tour of the new world. The firm also hopes the campus will help retain existing agents, he said.

Screenshot of one of RETechCampus’ five rooftop meeting spaces.

To visit the virtual, 3-D world, users must download a browser plug-in to their computer and then log in and create an avatar (the Chrome Web browser works best for PC users; the Safari Web browser works best for Mac users). Users choose how to dress their virtual representative and can control other elements of its look. They then can explore the campus at their will.

Users, whose avatars are tagged with their names, can talk to each other using their computers’ microphones; they can also broadcast live video feeds if they turn their computers’ cameras on.

As in real life, visitors to RETechCampus can speak to one another only if their avatars are within speaking distance. The farther the two are away, the more distant the voices. Also, visitors must walk or “run” around the environment, using their computer’s mouse to point their avatar in the right direction.

Users can also execute a variety of preset gestures: Press 1 to wave, press 2 to clap, press shift to run.

During presentations and meetings, users can click the screens in the various meeting rooms to pull up full-screen versions of a slide deck or video. Users also have the ability to conduct private meetings in the space. 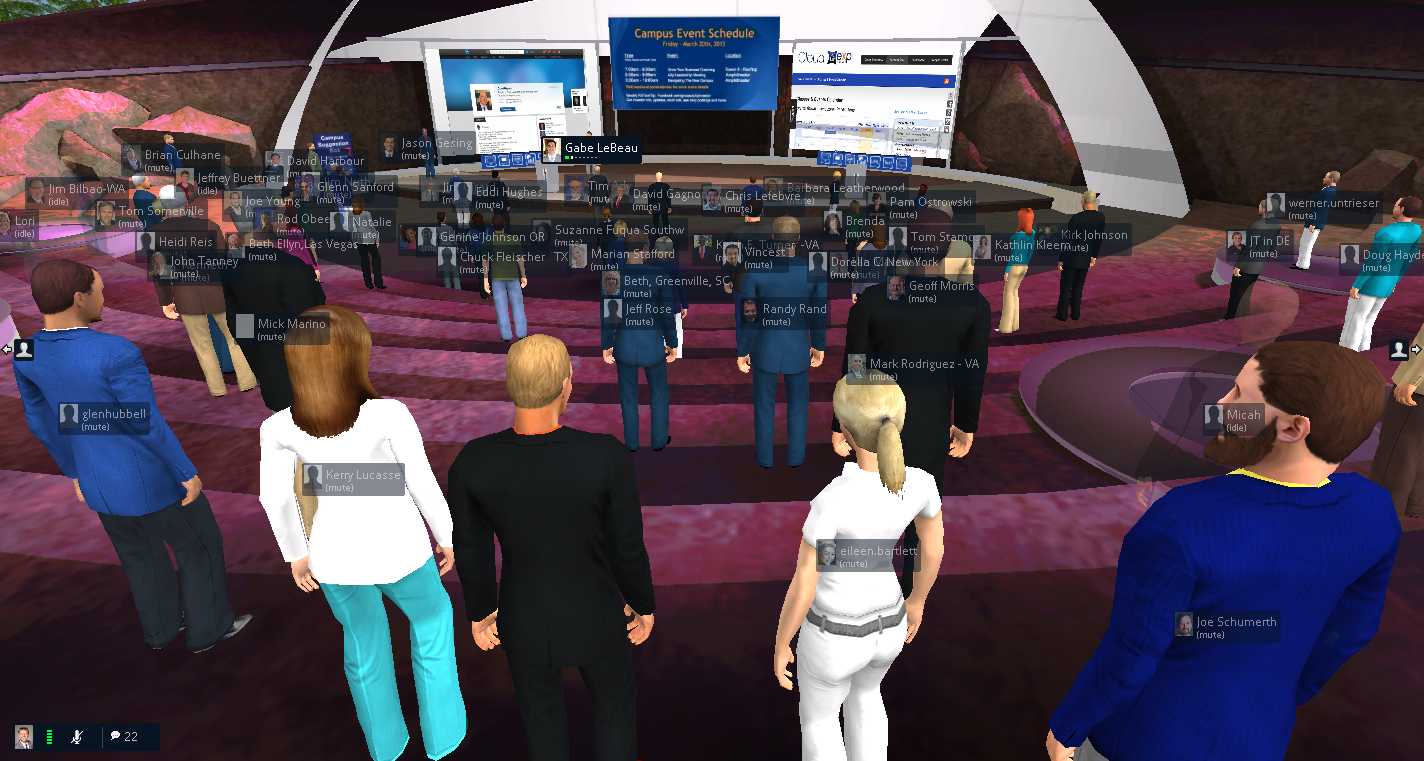 The result is uncanny.

In Inman’s demo of the virtual universe, a meeting with Andersohn, eXp Realty’s CEO Glenn Sanford and the firm’s president, Jason Gesing, the distinction between reality and the computer-generated world we were all interacting in began to blur. It felt like we were actually all physically together, though we were all hundreds of miles apart.

Overview of the RETechCampus world.