Joe Schwarz is sick and tired of being a landlord.

“The property has pretty much been a nightmare since day one,” he said of a home he bought while a student at Arizona State University in 2007 near the height of the housing market in the Phoenix area. “I’ve wanted to be done with it for years but I couldn’t because of the second (mortgage) to be honest … A lot of people shy away from me because of the second.”

Schwarz said he purchased the property for $165,000, thinking he was getting instant equity given that other similar properties nearby were selling for as much as $199,000 at the time. The plan was to rent the property to cover the mortgage while watching the equity increase over time.

He purchased using some money he inherited along with a stated-income loan and a second mortgage to avoid paying private mortgage insurance (PMI).

“I had to go stated because I couldn’t qualify otherwise because I had a part-time job working at a bar while I was in college,” said Schwarz, who has since married and purchased another property where he and his wife live. “I was told if I do a second you don’t have to pay PMI.”

But about a year after Schwarz purchased the investment property, the housing market tanked and he saw the value of the property drop precipitously, falling as low as $65,000. Meanwhile the original plan for renting to a friend fell through, and although he ended up renting the property eventually, the rental income was barely enough to cover his mortgage payments, not to mention maintenance, vacancies and other costs that come with being a landlord.

“I’ve never really made any money on the property. In fact, it’s been a huge money pit for me,” he said, estimating he’s invested about $30,000 in the property that he never expects to see again.

Stymied by the second

Schwarz wasn’t able to refinance because he was underwater on the property, which as an investment property also didn’t qualify for the government programs he pursued that offered refinancing options to underwater homeowners — at least at the time.

Schwarz blames the inability to refinance primarily on the second mortgage.

“I hate having that second,” he said. “The second has just made it … impossible basically refinancing or doing any of that stuff.”

Schwarz said he has continued to make mortgage payments because he doesn’t want to harm his credit, but at $30,000 in the hole he’s close to giving up on the property.

“I’m never going to see that money … so why would I want to be any farther in the hole?” he asked. “I have kind of been under the assumption over the past few years that this property was going to be a foreclosure or short sale.

“My wife and I are just tired of it,” he continued. “Just tired of dealing with the property … Being a landlord is not the right thing for me.”

Schwarz got some relief last year, when his first mortgage, a seven-year adjustable-rate loan, reset at a lower interest rate, dropping his payment more than $300 a month. But that ARM is scheduled to reset again in 2017, when interest rates could be higher, and his second is a fixed 8.5 percent that he has little hope of refinancing into a lower rate because he estimates the home is still $20,000 underwater.

Meanwhile, home price appreciation in the Phoenix market has slowed to a crawl after a strong rebound between 2011 and the first half of 2014. RealtyTrac data shows median home prices bottomed out in the Phoenix metro area in March 2011 at $110,000, and since then have risen 64 percent to $180,000 in December 2014. But the pace of appreciation has slowed dramatically in the past few months, with the December median price up 2 percent from a year ago compared with a 21 percent year-over-year increase in December 2013. Home price appreciation in Phoenix peaked at 30 percent in April 2013 during this latest rebound. 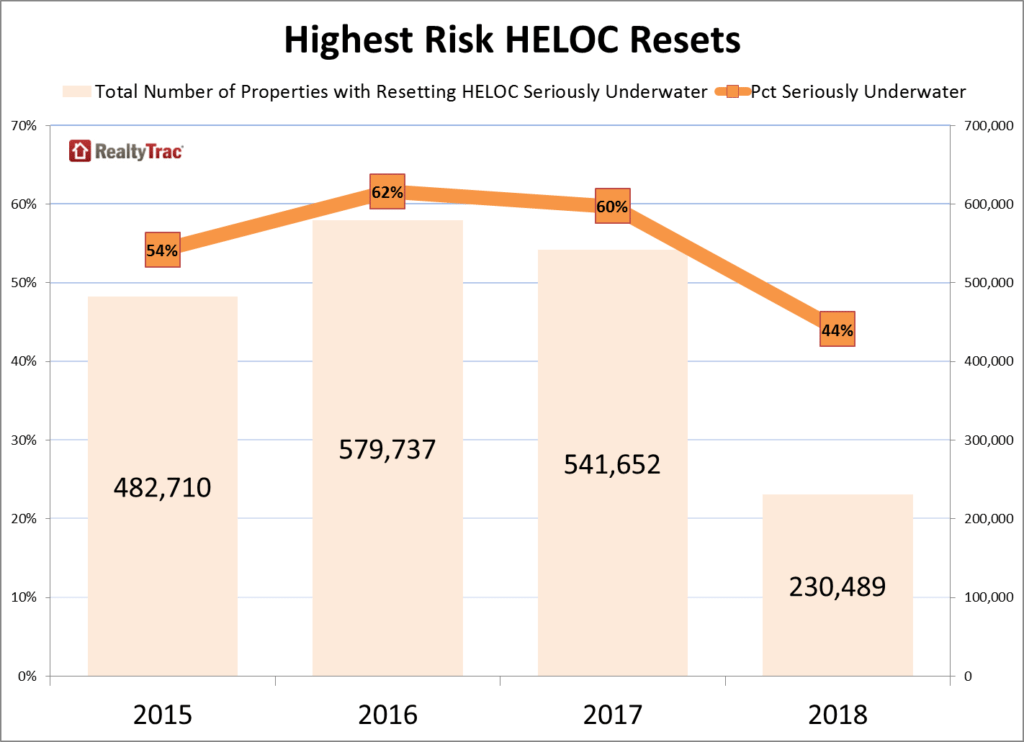 That slowing appreciation is deflating the hopes of underwater homeowners like Schwarz who have held on for years waiting to regain their equity but who are now ready to walk away, according to full-time Phoenix real estate investor Maria Giordano.

“The majority are in situations where they have a second that is going to adjust,” said Giordano, who with her husband owns and manages City Line Properties, which specializes in acquiring homes from distressed homeowners like Schwarz who have few options except for foreclosure. She is working with Schwarz on a deal that would allow him to unload his property without having a short sale or foreclosure on his credit history.

Giordano said the combination of slowing appreciation and a second mortgage — or first mortgage in the case of Schwarz — that is going to adjust in the near future is pushing more of the distressed homeowner holdouts over the edge into selling or even foreclosure. Many of these homeowners also have the additional hurdle of deferred maintenance that makes it even tougher to sell or refinance their property.

“The two I looked at this week had green pools, just nasty,” she said, noting that these distressed homeowners have been willing to keep paying a second mortgage at a lower introductory rate, but now many are realizing that their payments will soon be going higher. “If you’re only paying $200 to $300 on a second … why not ride that out until you decide, ‘Oh shoot, I have to do something.’”