by Caroline Porter
Share this article
You successfully shared the article.
Close

Clients, colleagues and neighbors probably ask you relatively often, “How’s the market doing?” This one question spurred a comprehensive report at one North Scottsdale real estate team that resulted in national media attention and an in-depth piece to give to clients.

In this case study, we’re taking a look at this newly released report created by Don Matheson and The Matheson Team from Scottsdale, Arizona, called “Battle of the Neighborhoods.”

It’s a hyperlocal piece of original content that compares the appreciation of eight luxury Scottsdale neighborhoods, and it’s packaged with its own unique branding and media campaign.

We’ll hand it over to Don and his team to break down their methods and share the results.

What problem were you trying to solve?

There’s a lot of real estate data out there. Unfortunately, very little of it, at least in our experience in Scottsdale, focuses on the neighborhood level.

The goal of this project was to present valuable, neighborhood-level data to current and potential local homeowners.

The goal of this project was to present valuable, neighborhood-level data to homeowners and clients.

We knew that we had to present it in an equally compelling and accessible way. It was supported by the idea that providing an item of value to clients is one of the best investments you can make in your marketing efforts.

The ultimate question for us was: What unique information can we offer to people who live in or would like to live in these neighborhoods?

Second to that, how can we make dry numbers interesting and relevant?

How did you land on the battle as a solution?

In its purest form, real estate data is inherently boring — except maybe to real estate agents or others in the industry. We knew we needed to put this together in a way that was inherently fun and even potentially viral.

If reality TV proves nothing else, it’s that people love battles and contests. Scottsdale residents are very passionate (and a little bit competitive) about their neighborhoods, which makes it the perfect place for a real estate showdown.

How did you go about selecting the areas, features and factors to compare and contrast?

The neighborhood selection was easy enough. And for any agent who might want to do something similar, I imagine you’d have the same idea: What are the go-to, front-of-mind neighborhoods where I live and work?

What are the go-to, front-of-mind neighborhoods where you live and work?

From there, we narrowed it down to eight — from nearly 20 that we could have used in North Scottsdale — by sticking with an apples-to-apples concept.

We were able to rule out a lot of neighborhoods from a purely statistical perspective based on neighborhood size alone. While the sales prices might be high in all of them, not all of them have comparable inventory year after year.

We’re fortunate to have a local friend and real estate expert in Mike Orr, director of real estate studies at Arizona State University and founder of the Cromford Report.

He helped us narrow down our focus to the percentage change in annual average sales price per square foot as the best measurement of appreciation.

All of this data, collected from May 2011 (when the North Scottsdale real estate market “bottomed out”) to May 2015, came straight from public records to include FSBO and other non-MLS sales.

The data came straight from public records to include FSBO and other non-MLS sales.

Here’s our criteria breakdown: no to trustee sales due to pricing anomalies, and yes to distressed properties because they were part of the value equations at the study’s starting point.

Then we said no to condos and townhomes because they appreciate and depreciate differently than detached homes, and they make up a different percentage of the market in each community.

What was the result?

To be honest, we had no idea what we’d find when we started. We were surprised when we got the results, especially when some of the neighborhoods we thought were recovering well ended up in our bottom tier.

For us, that was just another example of why research like this is necessary — there’s a lot of bad information out there perpetuated by many different sources. 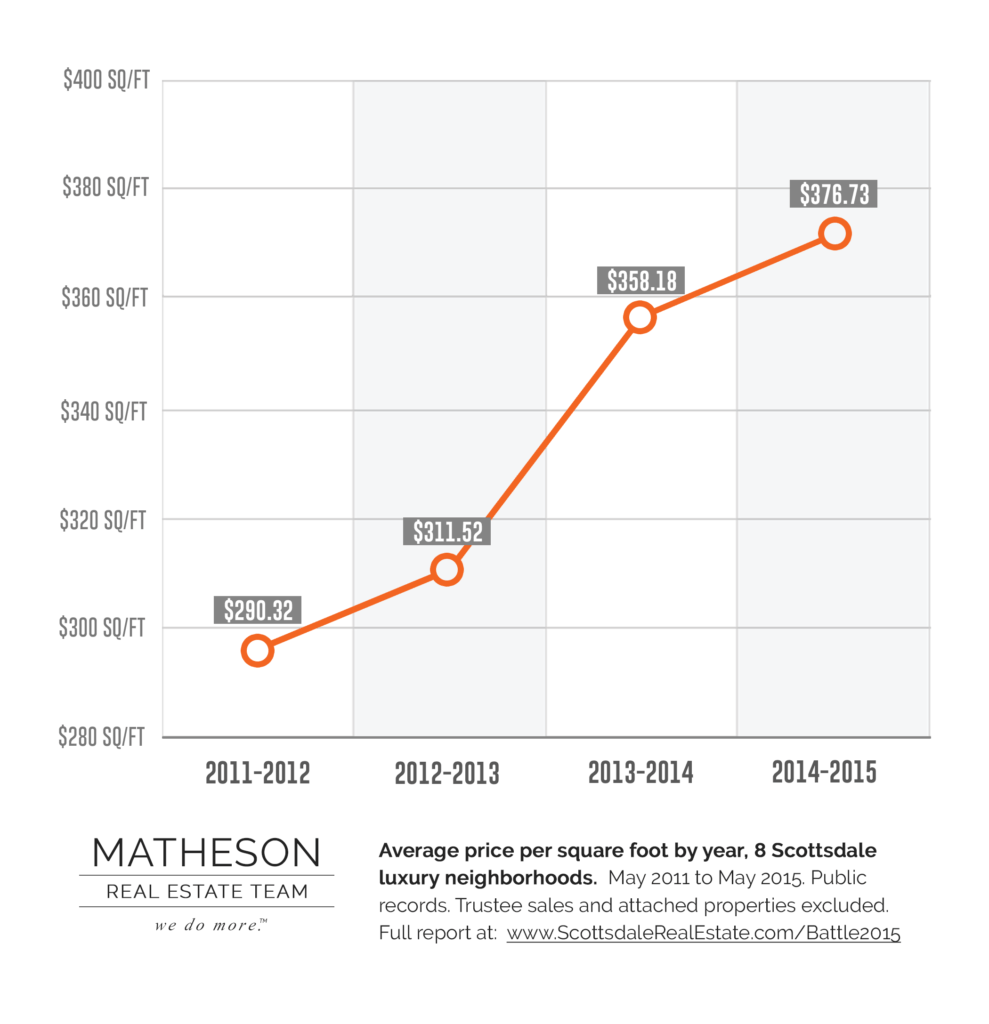 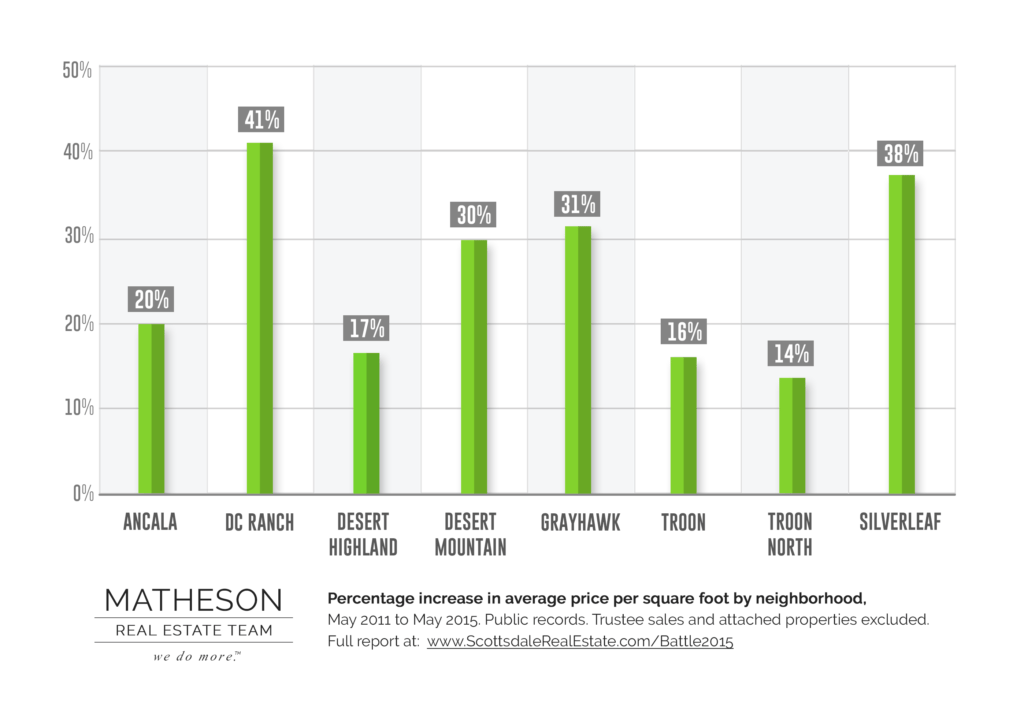 How did you promote or launch the battle?

In addition to a robust public relations campaign with a local PR guru and our in-house marketing team, we ran a campaign that included a prerelease contest a week before publication on our main website. We also did several strategic Facebook, Twitter and LinkedIn posts promoting it after publication.

This venture, as with all things social media, was a learning experience of its own: Our contest leading up to the report’s release started out far too complex. It asked people to rank the eight neighborhoods from greatest to least appreciation.

By the time we course-corrected on Wednesday afternoon, we asked instead for people to select one winner via an online poll. But the damage was already done, and by then the momentum behind the competition was gone.

That being said, the response has still been phenomenal.

What was the response from your community?

You might think this kind of study would find its audience exclusively among competitive homeowners.

However, thanks to a robust public relations and marketing campaign built around the premise that long-form, well-researched pieces hold vast marketing value, we’ve had media attention from not just Scottsdale but all over the country.

Our clients and community partners have loved it, as well as our agents, who can use this information every day as they work with buyers and sellers in our area.

Our agents can use this information every day as they work with buyers and sellers in our area.

We’re still getting in data, but I estimate we’ll have thousands of unique views and over 300,000 media impressions when it’s all said and done. The PR alone has been worth probably $15,000 in earned media so far.

The need for in-depth information for both real estate agents and the clients with whom they work is immense. One of the hopes with this piece is that, beyond generating local interest in our team, it will also serve as a valuable item for a long time.

This notion might prove to be particularly true when people are choosing between even a few of the eight neighborhoods in the report, as is often the case when we work with clients in the area.

There’s no doubt that the metrics we didn’t end up using — including annual sales revenue and annual average sales price in each community — would make their own compelling piece.

One of the most important takeaways from our “Battle of the Neighborhoods” is confirmation in the basics of real estate: Location is king, and neighborhood amenities are royalty in their own right.

The poorest-performing communities have far fewer amenities nearby, and older homes with less price variety mean longer commutes for the people who live there.

Do you think a similar study would provide value to buyers and sellers in your neck of the woods? Do you think we left anything important out? Bring on the feedback in the comments section below.

Caroline Porter is the marketing director at The Matheson Team in Scottsdale, Arizona. You can follow the team on Twitter @themathesonteam and Caroline @cmreporter. 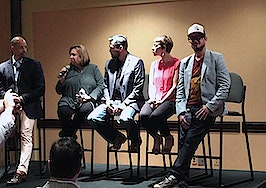 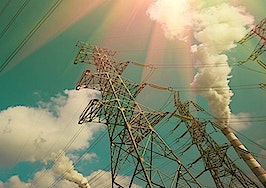 Setting the tone for energy efficiency in multifamily buildings 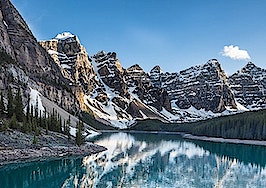 The old peaks and new pitfalls of home prices
Back to top
Only 3 days left to register for Inman Connect Las Vegas before prices go up! Don't miss the premier event for real estate pros.Register Now ×
Limited Time Offer: Get 1 year of Inman Select for $199SUBSCRIBE×
Inmanpot
Log in
If you created your account with Google or Facebook
Don't have an account?
Create an Account
Forgot your password?
No Problem