Exhausted markets got a break Friday, which leaves them and us to handicap the future. Stocks are up a little, but bonds and mortgages are holding their 2016 gains: the 10-year T-note at 2.05 percent, 30-fixed loans near 3.875 percent.

Exhausted markets got a break Friday, which leaves them and us to handicap the future. Stocks are up a little, but bonds and mortgages are holding their 2016 gains: the 10-year T-note at 2.05 percent, 30-fixed loans near 3.875 percent.

Take it from most optimistic to … not. By spring or summer, we may look back at January as the Great 2016 Head-Fake. The Patriots’ Edelman leaving a linebacker without shoes. Transient stock market thrashing signifying nothing, and not really connected to legitimate global economic issues.

In chart-watching terms, the Dow has retraced half of a big and unsupported gain, set a double bottom at 16,000, and might well begin a slow process of recovery.

On the other hand, the outcome may not be so pleasant. (Harry Truman wished for a one-armed economist so he would be spared alternate hand-ism. Some days I feel as though I’ve got five or six arms, all writhing in disagreement). If 16,000 does not hold, there is no support all the way back to 13,000. Improve soon, or ugh.

During this January drop, the market has not traded well. Any succession of air pockets in any market — diving 1 percent to 3 percent on single days — should be interrupted by equally violent upward moves even in a net-down market. None such this month. Big up-down volatility is a sign of forming bottom, and it may just take time — a hopeful thing to look for.

The real questions probably lie outside the stock market. All serious people are trying to point out to concerned civilians that although there is a wealth effect, which runs both up and down, linkage is weak from stocks to the economy and vice verse.

Many serious people — and not — are trying to find Fed-economy-stocks linkage. Did QE (quantitative easing) produce an unsustainable run in both stocks and the economy? If it did, there is no correlation in charts, let alone causation.

The Fed did lift from zero in December, but hardly enough to blow up the stock market. Pure, cranky opinion on my part: The Fed’s threat of a death march, quarter-point hikes to 3.75 percent until job growth slows by half … that may have pulled the plug on markets. It is foolish not to take the Fed at its word, even if the Fed is foolish.

Collapsing oil prices have perfect correlation to the stock drop, and it’s hard to argue against causation, but equally hard to believe that crashing prices for energy are bad news for the global economy. Jumping prices for energy have been bad news every time; how can falling be terrible? To buy that requires buy-in to the most apocalyptic theories of deflation. Not me.

Then, this thought: stocks and oil have significance, but are distractions from the big event — China. One of the worst stock market events this week coincided with yuan chaos so bad that it looked as though Hong Kong would be forced to drop its HK$ peg to the US$, rigidly in place since 1972.

Chinese officials parading before cameras to tell one whopper after another is tiresome and confusing. How much of the oil and stock drops is the result of ripples outward from China, doing fantastic damage to the trade books of every nation except (maybe) the U.S.? Maybe most.

Meanwhile, pity the poor central bankers. As a group covered in egg, raw and scrambled, entire omelets for hats. Their forecasts have been awful and their words worse, either threatening (Fed), or empty promises (Draghi at European Central Bank, Kuroda at Bank of Japan). The Fed has gone silent, as good an idea as any. Britain’s Carney with the good sense to stay at zero, but even his reassurances about the world economy are hollow.

At Davos last week, the annual and disgusting gathering of the point-zero-zero-one-percent, brilliant Ray Dalio of Bridgewater said, “There’s not a country in the world that should not ease its monetary policies.” I fear he’s closer to right than wrong. 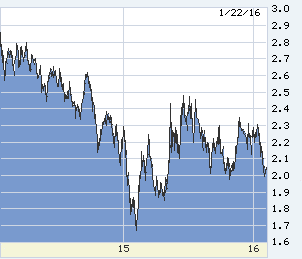 Ten-year T-note in the last two years. Lots of resistance at 2.00 percent; to break that will require bad economic news, not just sliding stocks. 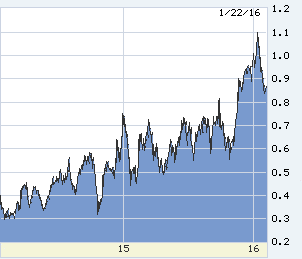 The Fed-sensitive 2-year T-note is a wet raspberry at the Fed and its threats to tighten. Downright insulting. The reversal in 2-year yield says the Fed is done for the year. 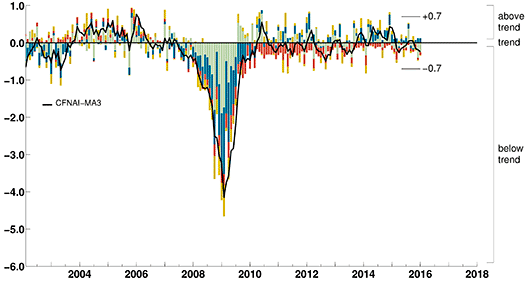 Dow chart back to January 2011. Falling volume (bottom bar) in the last 18 months of the run to 18,000 has disturbed traders throughout.

The Chicago Fed’s 85-component net factor from income abroad (NFIA) has faded every month since last July, not coincidentally the stock market top. At minus 0.24, it is only one-third of the way to a recession threshold, but makes the Fed’s determination to pre-empt overheating all the more odd.

Mortgage rates down 1/4 percent since first of year 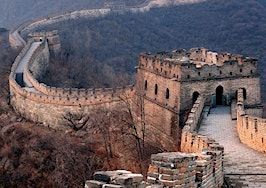 10 things every Realtor should know about China's economy

Stock market tips for real estate agents: 9 things to disregard, and 1 to remember
Back to top
Only 3 days left to register for Inman Connect Las Vegas before prices go up! Don't miss the premier event for real estate pros.Register Now ×
Limited Time Offer: Get 1 year of Inman Select for $199SUBSCRIBE×
Inmanpot
Log in
If you created your account with Google or Facebook
Don't have an account?
Create an Account
Forgot your password?
No Problem