Inman has permission to post this Gallup writeup by Jim Norman. 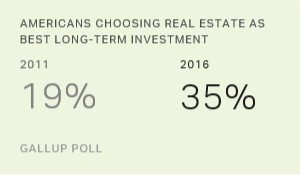 Real estate and gold have switched positions over the last five years as gold prices tumbled and home sales recovered from the 2007-2009 housing market collapse. In August 2011, 34 percent of Americans named gold as the best investment for the long term, compared with 19 percent for real estate.

Stocks and mutual funds, in spite of making major gains in the past five years after the historic 2008 stock market crash, have struggled to gain favor in the public’s eyes. In August 2011, with the Dow Jones Industrial Average still below pre-crash levels, 17 percent of Americans chose stocks and mutual funds as the top long-term investment.

The Dow in April 2016 is above its pre-crash high of 14,164 by almost 4,000 points, but the percentage choosing stocks or mutual funds as the best long-term strategy has grown only to 22 percent. That figure did reach 25 percent last April, but dipped slightly this year after the Dow’s roller-coaster ride in recent months.

Meanwhile, as the average sale price of new homes in the U.S. increased from $259,300 in August 2011 to $348,900 in February of this year, the percentage of Americans picking real estate as the best long-term investment almost doubled. During approximately the same time span — from August 2011 to April of this year — gold prices plunged from $1,910 to $1,254 per ounce, and the percentage thinking gold would be the best investment was cut in half. 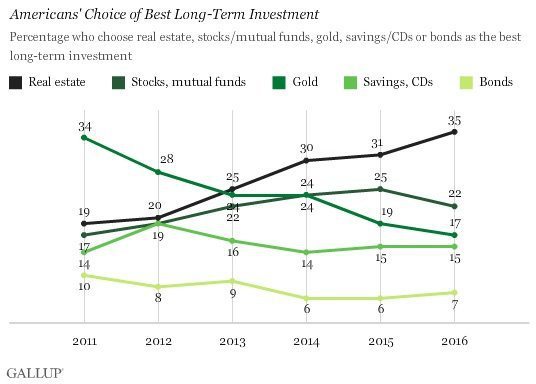 Combined results from the 2015 and 2016 Gallup polls that asked about long-term investment preferences reveal some clear differences among key subgroups. 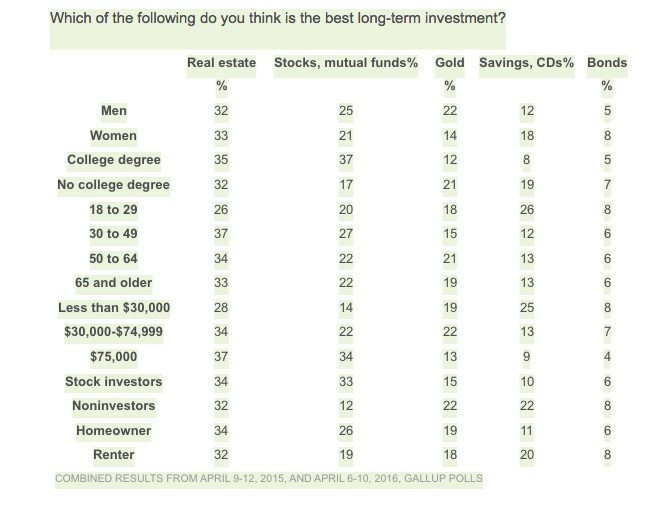 Both the housing market and the stock market have recovered from catastrophic losses suffered in the last decade, with average house prices and the Dow well above their pre-crash high marks.

But Americans have been much more likely to regain confidence in real estate than in stocks as “the best” long-term place to invest their money. The split between the two investment options grew again in the last year as the stock market’s volatility increased investors’ concerns.

With housing prices showing a steadier path upward in recent months, even stock investors are about as likely in the April 2016 poll to choose real estate (37 percent) as stocks (32 percent) as the best long-term investment.

Results for this Gallup poll are based on telephone interviews conducted April 6-10, 2016, with a random sample of 1,015 adults, aged 18 and older, living in all 50 U.S. states and the District of Columbia. For results based on the total sample of national adults, the margin of sampling error is ±4 percentage points at the 95 percent confidence level.

Learn more about how the Gallup Poll Social Series works.