by Tracy Freeman
Share this article
You successfully shared the article.
Close

Recently, this C21 Australia Real Estate brand marketing image made some waves on Facebook. Almost immediately on a post, the comparison to the iconic image of Sharon Stone in Basic Instinct was noted. 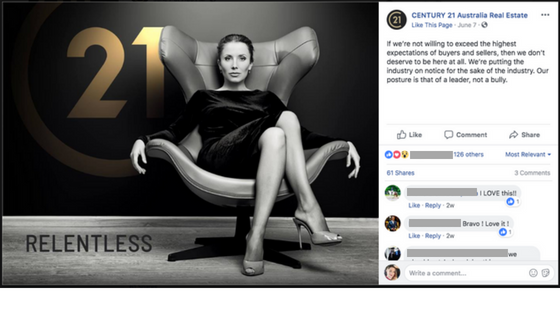 I confess to having a past career in marketing and branding. So, I decided to do a little, informal market research. I was truly curious to hear what some non-real estate agents had to say about the ad and the message it conveyed to them.

What thoughts came to mind? How did they feel about it? So, I posted it in a local Facebook group that I belong to, comprised mostly of savvy women from a variety of industries in and around New York City.

Their comments were fascinating. At first, they thought it was for Century 21, a retail clothing and fashion chain in the tri-state area, and the group thought it was awesome. After all, we all know that sex sells! Especially when it comes to fashion.

When I explained that it was actually for Century 21 Australia the real estate brand, the answers changed a bit.

They felt it made sense through the lens of the fashion industry, but saw a bit of a disconnect when marketing a real estate company. I guess “sexy” isn’t the first word that most clients used to describe their real estate agent (Ouch!).

Another woman took note of the word “relentless.” The use of that term made her think that the message was C21 will work hard to help you buy and sell your home. The image suggests that the woman, the agent, will be her own boss.

Or, she added, is the message that female agents are relentless, strong and sexy? If so, is that why she should hire an agent from this company?

Then someone posted that it looked like “commodity feminism.” Commodity feminism refers to the way feminist ideas and icons are appropriated for commercial purposes, emptied of their political significance and offered back to the public in a commodified form — usually in advertising.

The term is most notably connected in the U.S. to a book by Robert Goldman called Reading Ads Socially. Goldman argued that advertising underwent a radical transformation in the late 1980s when it was forced to address three closely related challenges: sign fatigue; increasing viewer skepticism, particularly among a (then) younger, media-savvy generation (a rare acknowledgement of Gen X’s existence, thank you); and finally, women’s anger at being addressed constantly in terms of idealized images of feminine desirability.

Seeing it as commodity feminism, how did it make her feel about the ad? Honestly, she said, she didn’t feel much, except maybe indifference.

One woman said the visuals are striking, but she would not have known what they were selling had I not told her. I think that is fair, since the overall C21 brand has been getting a new look, and the general population has not quite caught up yet.

Eventually, someone brought up the Sharon Stone reference. Stating that if that was intentional, it was a very bad ad from a strategic point of view. Female serial killers are rare, so I suppose she is a ground-breaker in that regard. But still, she is a serial killer.

Rebrands are tough. Creating an ad campaign that causes a reaction, positive or negative, is really tough. This one has certainly started a conversation. I’ll be curious to see where it leads.

Tracy Freeman is the Young Professionals Network Chair for North Central Jersey Association of Realtors and a broker/sales associate with Coldwell Banker in Maplewood, New Jersey. 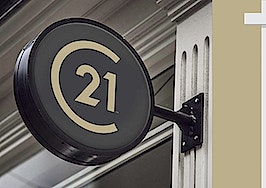 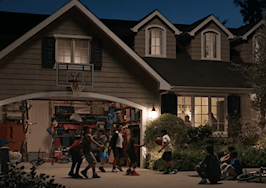 Can Coldwell Banker and Century 21 deliver on their new brand promises? 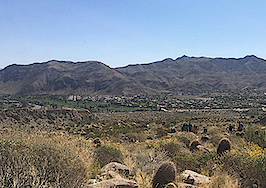