In June, more than 14 percent of all Zillow listings saw at least one price reduction, with major metropolitan housing markets experiencing the biggest cuts, according to a new Zillow analysis.

Out of the approximately 10 million listings currently on Zillow, 14.2 percent were subject to a price cut in June, up slightly from 13.4 percent during the same period in 2017. The uptick remains within the same range it has hovered along since 2013, according to data released Thursday by Zillow Chief Economist Aaron Terrazas.

“Price cuts could be increasingly more common in coming months if more recent trends continue to hold,” Terrazas writes. “Since the beginning of the year, the share of listings nationwide with a price cut increased 1.2 percentage points, the greatest January-to-June increase ever reported.”

Among the largest cities, the number of price reductions was more pronounced. In 23 of the 35 largest metropolitan areas analyzed by Zillow, higher priced listings experienced a disproportionate share of the cuts, with 20 percent of all listings in San Diego seeing at least one price reduction.

In Dallas, meanwhile, 21.9 percent of the city’s top-tier homes saw reductions while only 8.7 percent in the bottom tier saw similar cuts, according to the analysis. Home in Orlando and Houston also experienced a higher share of price reductions among it’s most expensive properties.

Among more affordable housing markets, including Phoenix, Philadelphia and Houston, fewer listings saw price reductions. In San Antonio, where median home values clock in at $185,000, 17.8 percent of all listings were subjected to cuts in June, down from  20 percent a year earlier.

The increase in price cuts comes even as median home prices continue to rise. Nationwide, housing prices have soared 8.3 percent to an average of $217,300 in 2018, according to Zillow. However, prices increased more modestly in June compared to January of this year, with growth projected to cool by 1.9 percent by the second half of 2019, according to Terrazas.

“The housing market has tilted sharply in favor of sellers over the past two years, but there are very early preliminary signs that the winds may be starting to shift ever-so-slightly,” Terrazas said. 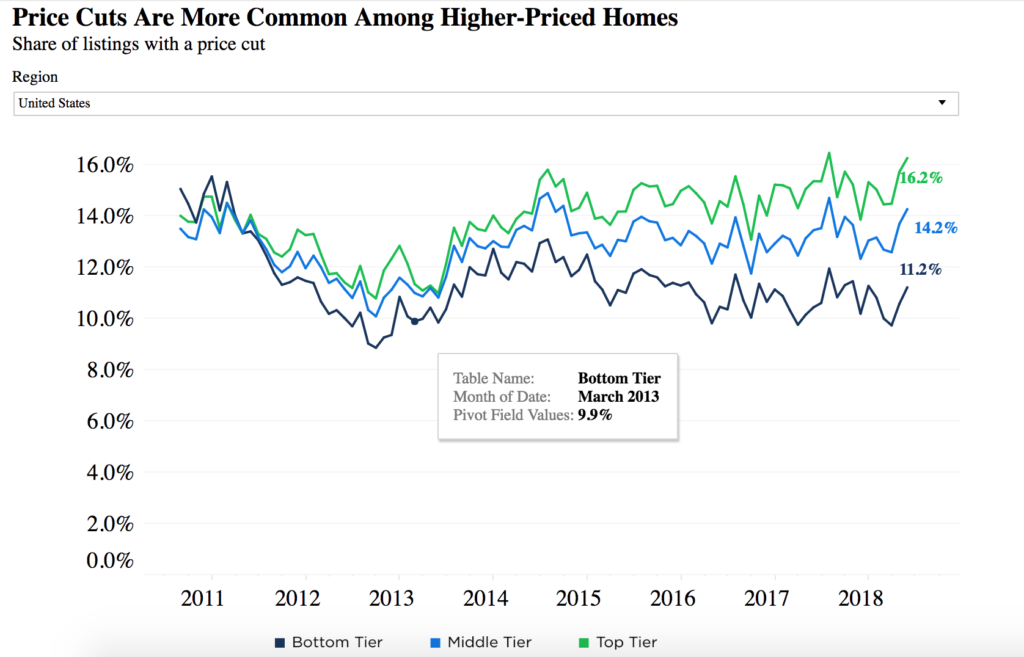 Foreclosure rate falls to 22-year low with every US state tallying declines
Back to top
Only 3 days left to register for Inman Connect Las Vegas before prices go up! Don't miss the premier event for real estate pros.Register Now ×
Limited Time Offer: Get 1 year of Inman Select for $199SUBSCRIBE×
Inmanpot
Log in
If you created your account with Google or Facebook
Don't have an account?
Create an Account
Forgot your password?
No Problem