We interrupt all of that other stuff for a brief message from the outside world, and we have good news. Normally, good news is bad for interest rates, but the news is so delicately good that it has not hurt rates. The 10-year T-note has retreated from 1.8 percent, and mortgages are still trading close to 4. percent.

At the heart of the good news is the reverse of former New York Mets Manager Casey Stengel’s frustration with the ’62 Mets: “Can’t anybody here play this game?” A brilliant manager and leader of a team that could not play.

Today, everywhere I look in our economy, global as well as U.S., the team is terrific, focused and productive, but the top leadership irrespective of party or philosophy can’t field, hit, or pitch. Like Marvelous Marv Throneberry after a disastrous bungle of a ground ball, telling the press that he lost it in the sun (it was a high-hopper).

One leader has learned to play the game. Federal Reserve Chairmain Jerome Powell put in another terrific performance this week announcing a Fed rate cut and pause ahead, his description of the pause completely opaque.

Just one year ago he had a Throneberry episode so bad that I feared he was a bust as chair, then creating the impression that the Fed planned open-ended rate hikes, the misunderstanding pushing mortgages to 5.25 percent and nearly cratering housing and the economy.

He has learned, and how. On Wednesday the best financial reporters in the world tried to get him to be more specific about his new catch-phrase: “We see the current stance of policy as likely to remain appropriate, as long as incoming information remains broadly consistent with our outlook.”

What is that outlook? A strong job market, the economy growing close to 2 percent target and inflation below target. What new data would cause you to change the target? Nope, can’t help you with that. Period.

Reporters fished for tilt. Is the Fed on the easy side? With a slightly impatient edge: The Fed funds rate is now in a range 1.5 percent to 1.75 percent, roughly the same as inflation, so a zero cost of money, and “that’s somewhat accommodative policy.”

When asked about raising rates, Powell did tip slightly, looking as though someone had asked him if fishing is good in his office.

“We’re strongly committed to achieving our 2 percent inflation objective. So, we’re not thinking about raising rates right now,” he said.

One unfortunate person asked why the Fed had cut rates. Impatience again. The same three things since early summer: A slow global economy, trade policy uncertainty, and inflation below target.

We are on the cool side of Goldilocks, but steady and will stay so until something happens. (Remember the Fed’s July 31 meeting, placid commentary from the chair and the 0.25 percent rate cut at that meeting perhaps the only one — followed the next day by a tariff spasm and mortgage rates crashing to 3.5 percent.)

The preliminary third quarter GDP report says a polite 1.9 percent rate of growth. Consumer spending was the driver, up at a 2.9 percent pace. The Fed’s favorite inflation measure was flat in September but was rising 1.7 percent year-over-year.

Today’s report of job gains in October and upward revisions of prior months are so absurdly high and is so inconsistent with GDP that the world’s bond traders simply ignored the data.

If the numbers of jobs are correct, the category concentrations are lowest wage and not an inflation threat. The ISM manufacturing survey (the old purchasing managers’ index, PMI) stayed weak at 48.3 (50 is breakeven,) but only 8 percent of the U.S. workforce is employed in manufacturing.

Even Europe has plateaued, with GDP growing 0.2 percent in the third quarter, the same as the second. The Fed could justify additional cuts if the outside world were still shrinking, threatening contagion here, but it’s not.

Now go back to that other stuff. Dueling realities on MSNBC and Fox and football.

The U.S. 10-year T-note in the past year. So long as the Fed is on hold, and its next move more likely to be to cut than hike, we can stay about where we are: 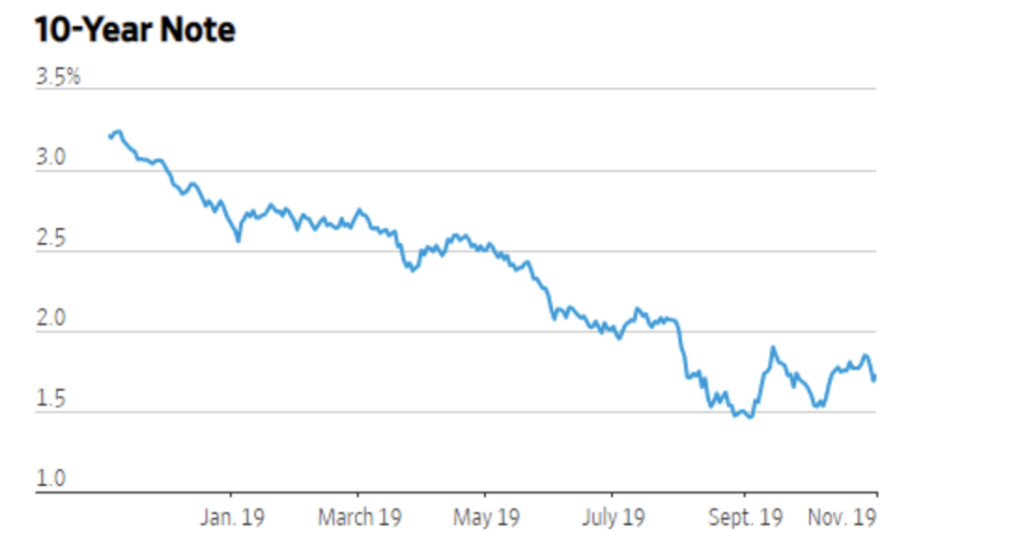 Forty years of Fed rate hikes and cuts. The trend down is still very much in place: 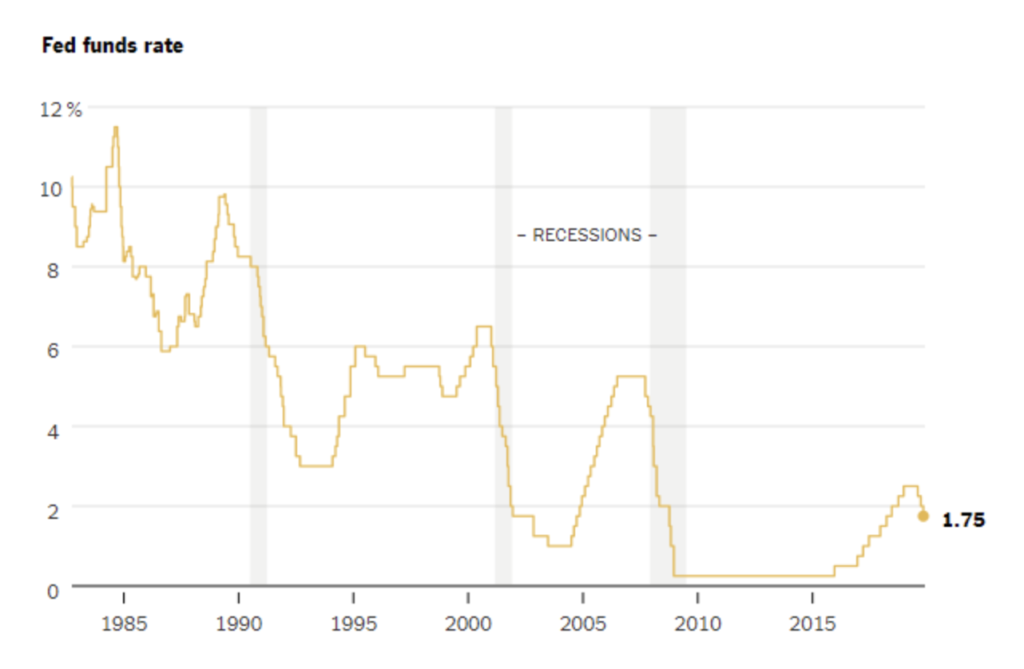 The Chicago Fed’s 85-factor measure of the economy is a visual catastrophe, but if you have time to stare for a minute and at the color key of the September calculation, the U.S. economy is still soft. And led by weakness in production and income: 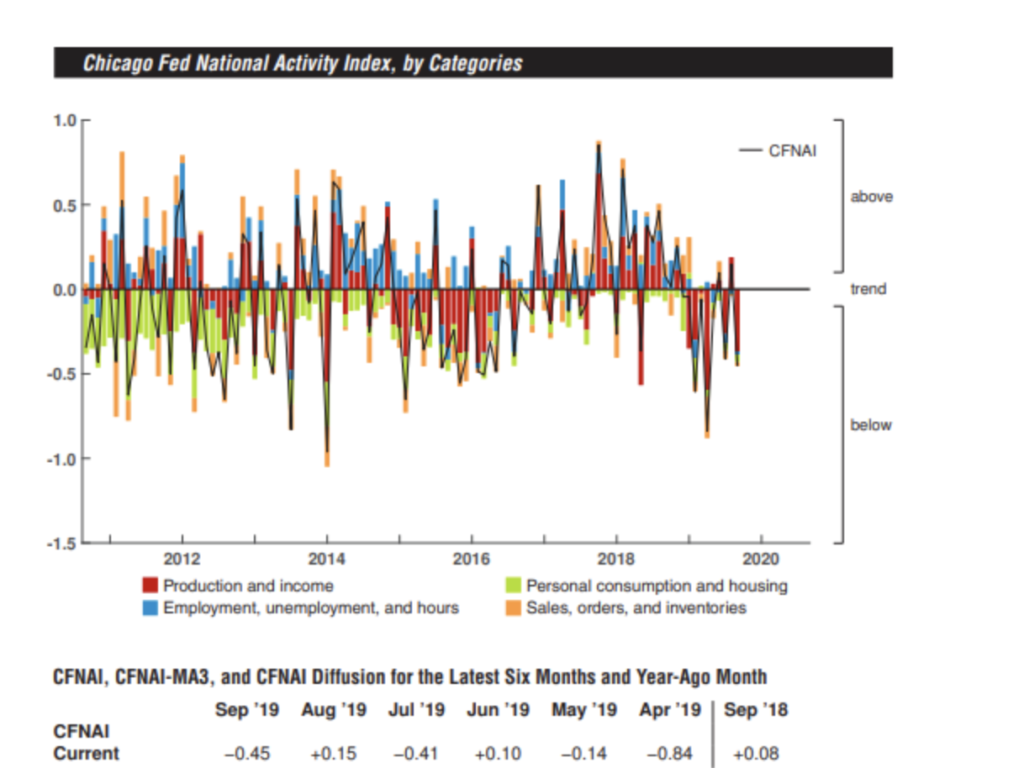