When Inman surveyed 30 multiple listing services in August, each had its own approach to the controversial days on market metric and statuses that affect days on market. Is it time for a national DOM policy?

Maybe, according to panelists at Inman Connect Now on Tuesday in a session titled, “Days on Market: Pandemonium and Pandemic Changes.” Panelists were Sam DeBord, CEO of the Real Estate Standards Organization (RESO), Rene Galicia, director of MLS engagement for the National Association of Realtors, and Katie Smithson, director of enterprise services for real estate software firm W+R Studios.

“Days on market sounds like a boring topic to start, but it really affects what we present to consumers,” DeBord told attendees of the all-digital conference. “It actually affects what we represent is the truth to the people we work with and it affects our history of our sales transactions, etc.”

“So, while you think this would be consistent and simple and straightforward — something as simple as counting the days that a property’s been on the market — it’s actually sort of a mess. It’s really all over the board.”

Galicia noted that NAR, which institutes policies for Realtor-affiliated MLSs nationwide, does not have a national days on market policy. NAR does have MLS Policy Statement 7.96, which says MLSs are not required to track or report days or time on market, but that if they do track it, neither it nor the information it’s based on may be deemed confidential and brokers can’t be prohibited from making it available to clients. But that policy doesn’t dictate how DOM are calculated, according to Galicia.

“Traditionally, days on market was tracked based off of a list contract date. As marketing tactics have evolved and member needs have evolved, you start seeing a little bit of innovation there. How calculations are run, what triggers that calculation. MLSs have implemented local custom solutions by marketplace,” Galicia said.

“It’s not until that discussion furthers along in the process to rise to a national issue or national policy concern that we turn to looking at having a standard.”

Considerations for calculating DOM balance a couple of things, Galicia said: tracking the history of a listing internally so not only the listing broker but also other property brokers know what’s going on with that listing, but also what’s being represented to consumers in public marketing.

“You might have an agent that belongs to multiple MLSs and they see the days on market and one MLS says 82 days and other says 45 days. In our reports we want that information to be accurate and we want people to trust our products, and we see the MLS as a source of truth,” Smithson said.

“Then throw into the mix that you look on Zillow and Zillow actually has days on Zillow, which could be totally different from what the agent sees on the MLS and then that adds more confusion to the consumer.”

W+R Studios, whose flagship product is comparative market analysis software Cloud CMA, takes those discrepancies on a case-by-case basis. “It’s a little bit of a support nightmare because when you get an agent calling in asking about the days on market you kind of have to explain ‘Well, this is how the MLS is providing it to us. This is why we’re using that particular number,'” she said.

A lot of agents think of days on market as a marketing tactic, not as a measurable statistic, according to DeBord, who used to be a broker himself. DeBord then polled conference attendees asking if they see agents “gaming” DOM stats for their listings. While 3 in 10 attendees said no, the rest said they saw it at least some of the time, and a quarter said “it’s common and expected.” 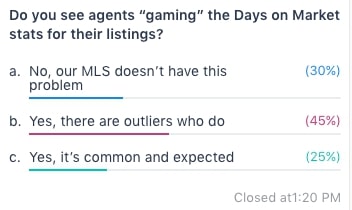 Galicia said it was important to keep in mind that the MLS is not a marketing platform, but rather a broker cooperative whose purpose is to be a source of truth and share accurate, complete, consistent listing information.

“We need that one true north,” he said. While the MLS is a marketing gateway in the sense that it distributes listings to other platforms for the promotion of listings, that’s a “second tier” purpose, according to Galicia.

A related issue is that MLSs have moved away from basing days on market on when a listing agreement was signed to simply having different statuses that trigger (or not) days on market, according to DeBord.

“While you may have standard statuses at RESO, which will tell you basically the lifecycle of a listing, there are so many local statuses within [each MLS]. You may have six different kinds of ‘pending’ within an MLS,” he said.

MLSs making separate decisions about whether or not to track days on market and how during the pandemic means that there will be inconsistent reporting in the future, according to DeBord.

“When a whole bunch of MLSs decided that they were not adding days on market during COVID, a year to five years down the road it looks like properties in this city were selling a lot faster than they were in this other city because we’re making sort of arbitrary decisions as to what days on market is,” he said.

DeBord asked Galicia about the appetite in the industry for standardization around DOM.

“The discussions are there about a need or desire to standardize particularly days on market but still allow MLSs to be responsive to remember needs [and] track other calculations,” Galicia said.

“Not all policy needs to be national policy. MLSs can be responsive to member needs and local market conditions. National policies, by and large, [are for] those things that go to the heart of what the MLS is and establishing that consistency when there is an issue that rises to a national level that’s across markets. This [standardizing days on market] maybe starts to trend that way.”

Conversations that have come up to him have been along the lines of “We standardize everything else except days on market, which is the lifecycle of [a] listing. We need to be transparent,” he said. Galicia himself had to decipher days on market differences as a consumer when he recently bought a home.

DeBord then polled the audience again, this time about whether they use days on market as a statistic to advise their clients, the vast majority (85 percent) did. 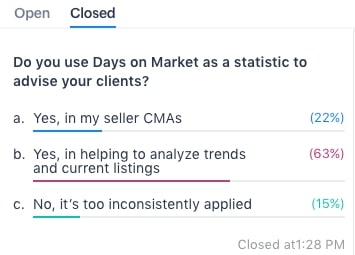 DeBord then asked Smithson if there might be some sort of technical solution that software companies could come up with for a better DOM calculation. No, according to Smithson.

“I think this is actually not a problem that can be solved by technology because when it comes to talking about a CMA, the agent’s job really is to take that information and then inform their clients, which is why we want accurate information on days on market because it’s a good statistic to use when you’re trying to properly price a home,” she said.

If anyone in the industry wants to get involved and discuss days on market or any other policy idea, the starting point for that would be NAR’s MLS Technology and Emerging Issues Advisory Board, which has about 20 members, half MLS executives and half brokers, according to Galicia. To get in touch with the board, agents and brokers can reach out to mls@nar.realtor.

“There’s oftentimes a perception that [NAR Director of Engagement] Rodney [Gansho] and I sit in the corner somewhere and NAR staff creates policy and imposes it on the industry. Nothing could be further from the truth,” Galicia said.

“Policy is truly by members for members. Policy comes about by members getting involved, coming from that perspective of being a broker cooperative, thinking of those policies that make life easier sometimes. But policy has to be determined by members, and it’s determined by members with diverse business models, sizes, areas of expertise, technology partners and it’s informed by that experience in the marketplace.” 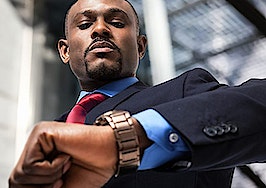