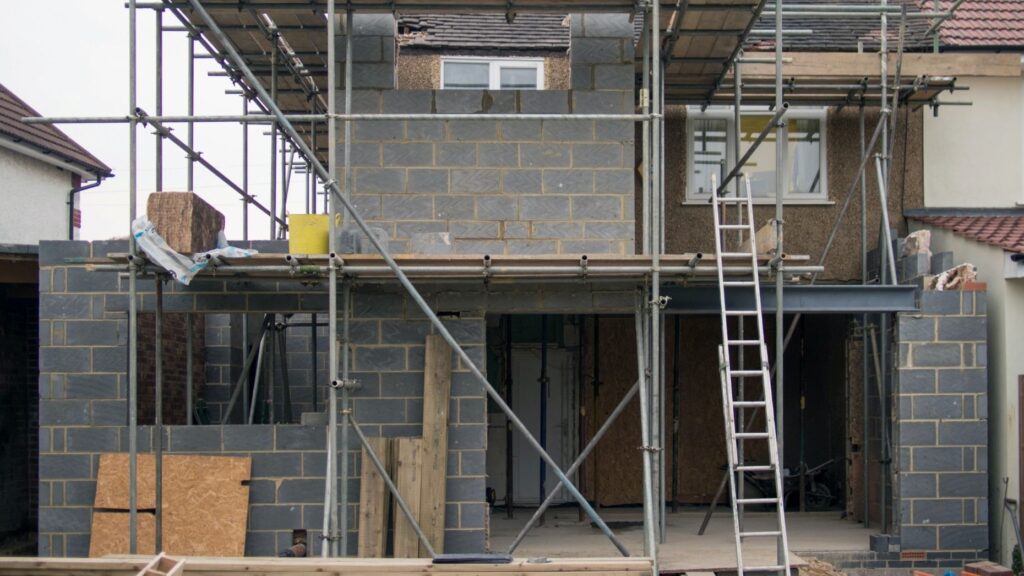 New listings of newly-constructed homes decreased 4.1 percent year over year to a seasonally adjusted rate of 74,000 during August, according to a new report from Redfin. That decline was a sharp turnaround from the 3.8 percent gain in newly-built listings that hit the market in July.

Although new listings of newly constructed homes took a hit, listings of existing homes increased 5.2 percent. And the decline in new-home inventory didn’t seem to negatively impact sales at all, as they soared beyond 1 million for the first time since 2006. 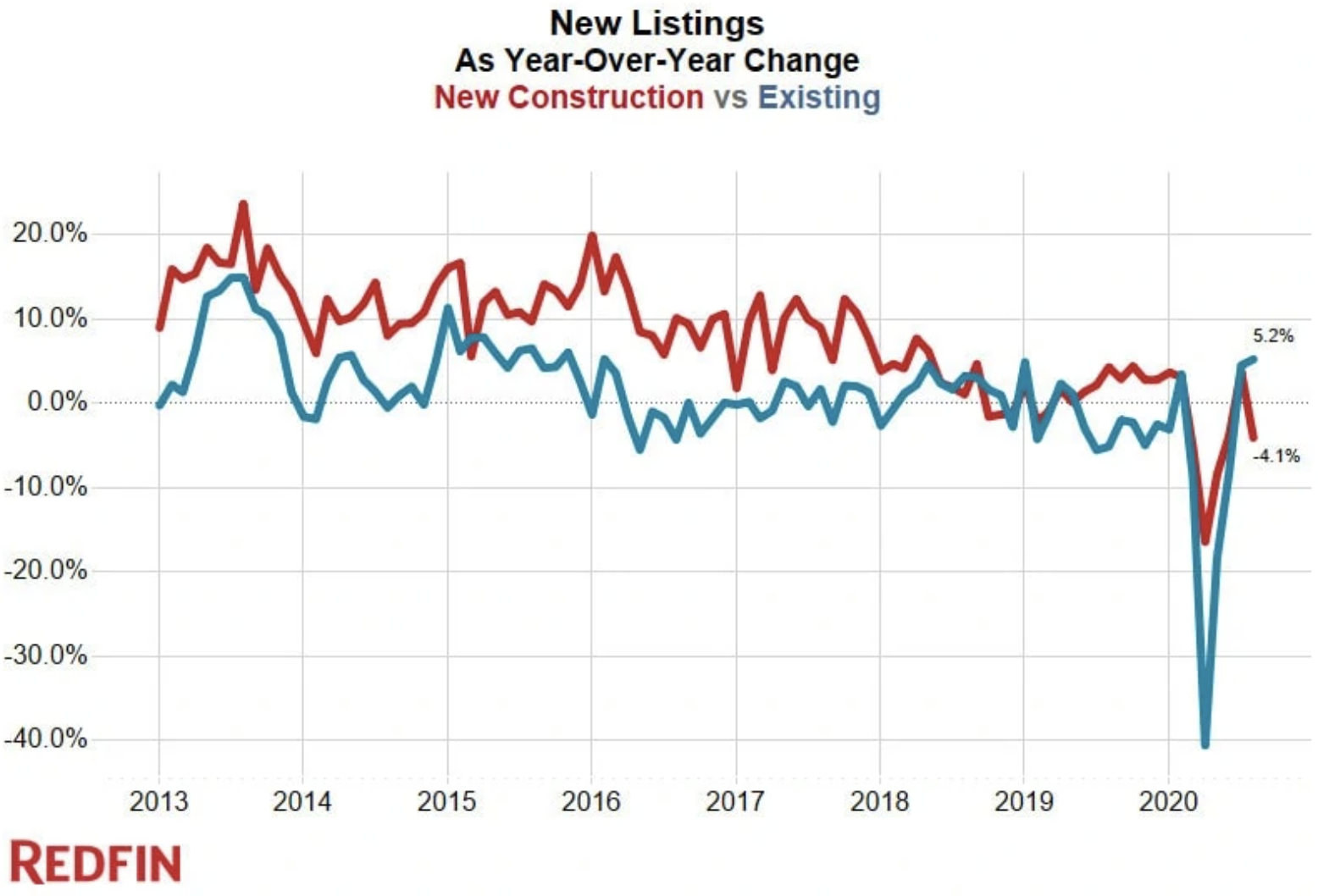 The lack of new listings of newly built homes can partially be attributed to lumber shortages as a result of the pandemic, as well as competition for labor with homeowners who are conducting home renovations while in quarantine, Redfin Chief Economist Daryl Fairweather said in a statement.

“There’s plenty of demand for new homes, but builders are facing a unique and costly set of hurdles as they attempt to satisfy that demand,” Fairweather said. “Listings of new homes aren’t bouncing back as quickly as listings of existing homes because, unlike individual homeowners, construction companies have to deal with lumber and labor shortages during the pandemic. They’re also competing for labor and materials with folks who are renovating their housing during quarantine. The lack of new listings is keeping builders from reaching their full potential in terms of home-sales growth.”

Supply took a hit across both newly built homes and existing homes during August. Inventory of newly constructed homes dropped 33.6 percent year over year in August to 185,000 while the number of existing homes on the market declined 38.3 percent, both the largest declined in inventory since 2013. 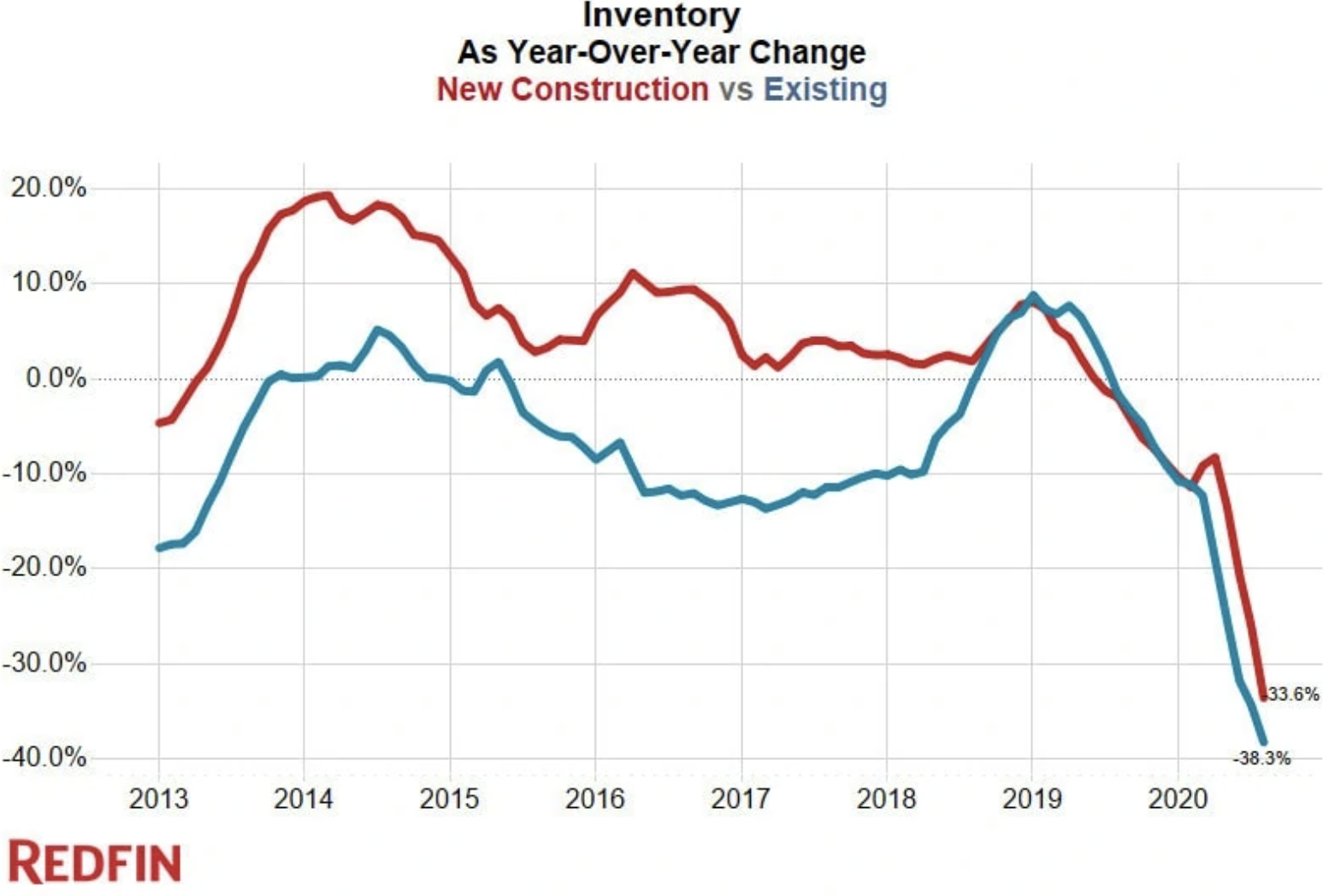 Amidst a low-inventory high-buyer demand market, prices have crept upwards with the median price of newly built homes reaching $378,000 in August, 4.1 percent higher than the previous year and exceeding the pre-coronavirus growth rate for the first time. Meanwhile, the median existing home price rose 12.1 percent from the year prior to $316,000.

“Prices will keep going up if we don’t see a meaningful increase in the supply of new homes on the market,” Fairweather said in the report. “Unfortunately, there are no signs that such an increase will occur anytime soon.”

Although homebuilder confidence rose to an all-time high this month, builder activity actually declined in August. Housing starts decreased 5.1 percent from the previous month, housing completions declined 7.5 percent and building permits declined by nearly one full percent. In addition to lumber shortages, builders have faced the challenge of astronomical price increases with the cost of lumber rising more than 170 percent since mid-April.

The typical new home spent 88 days on market during August, down from 93 days the previous year. Geographically, the West lagged behind in terms of both new-construction listings and new-home sales. Meanwhile, the Northeast was the only region that saw growth in newly-built listings during August and also saw the greatest gains in median sale price of new homes.