Markets pricing in only 1.7 percent chance of a 50-basis Fed rate hike on March 16, down from 41.4 percent before Russian invasion.

Rising mortgage rates put a damper on purchase loan applications last week, but interest rates have since reversed course on the rising tensions and economic uncertainty created by Russia’s invasion of Ukraine.

Mortgage rates had been on the rise this year as bond investors who fund most home loans worried about the prospect of further tightening by the Federal Reserve as inflation continues to defy expectations.

Rates for 30-year fixed-rate mortgages breached the 4 percent threshold on Feb. 10, according to a daily index of rate lock data compiled by Optimal Blue.

But the war in Ukraine could prompt the Fed to take a more cautious approach to interest rate hikes. Investors who see U.S. government debt and mortgage-backed securities (MBS) as a safe haven are already channeling billions of dollars into bonds and MBS, driving the price of those assets up and interest rates back down.

The Optimal Blue Mortgage Market Indices show that after hitting a 2022 high of 4.19 percent on Friday, rates for 30-year fixed-rate mortgages fell 9 basis points over the weekend and another 11 basis points Tuesday, to 3.98 percent.

Yields on 10-year Treasury notes — a useful barometer for where mortgage rates will go next — fell 13 basis points Tuesday, to 1.71 percent, down 35 basis points from a 52-week high of 2.06 percent.

In the long run, the war in Ukraine might end up putting upward pressure on mortgage rates if economic sanctions lead to higher energy costs that fuel inflation.

For now, Kan said the Mortgage Bankers Association “will continue to assess the potential impact on mortgage demand from the sharp drop in interest rates this week due to the invasion of Ukraine.”

The MBA reported average rates for the following types of loans last week:

Fed policymakers are expected to shed more light on their views at the next meeting of the Federal Open Market Committee, which will conclude its next two-day meeting on March 16.

While the Fed typically raises the federal funds rate by a quarter percentage point at a time, some members of the Federal Open Market Committee had been pushing for a 50-basis-point increase.

That was before Russia’s Feb. 24 invasion of Ukraine. The CME FedWatch Tool, which monitors futures contracts to calculate the probability of Fed rate hikes, shows markets on Tuesday pricing in only 1.7 percent chance of a 50-basis-point rate hike, down from a 41.4 percent chance on Feb. 22. 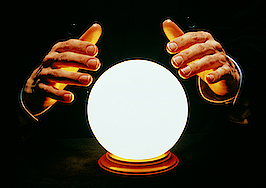 How mortgage rates hit 4% ahead of schedule, flummoxing forecasters