Building an engaged audience on social networking sites is an excellent way to increase your website’s traffic.

The question I want to answer is: ‘which social networking sites do we invest our time in and why if our goal is more traffic?’

How Can We Measure The Value of a Connection?

In an attempt to answer this question, I collected data from 5 of the most popular social media platforms. A Facebook Profile, a Facebook Page, a Facebook Group, a Google+ Profile and two Twitter accounts.

In order to compare sites side by side, I used this simple formula;

The same article and copy were used by myself on Facebook, Twitter and Google+ when posting. Those who helped out used the same article with a slight variation in copy.

Time of post can also greatly impact clicks and exposure, the posts occurred between 9am and 5pm est on a Tuesday or Wednesday. Each platform analyzed was updated once for this experiment and clicks were tracked using Goo.gl

Here are my initial findings:

My Facebook Personal Profile had the highest engaged audience with .035% of my connections clicking on my post

Now before you go promoting your business through your personal profile I need to be very clear on why I think this happened and how it can happen for you. I post MOSTLY random yet entertaining questions and updates on Facebook like “Guys wearing Uggs Hot or Not?” and “Let’s have some fun! Tag yourself in the bottle of beer pictured here that you like the most. I will drink them in order of the most tagged!”. 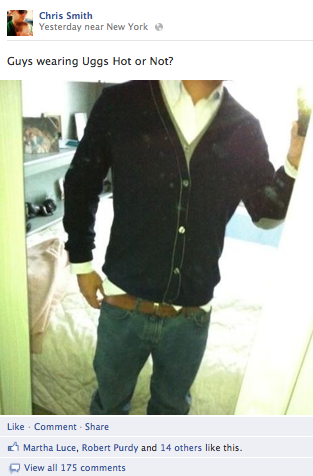 When I do post a link to my blog, the way I did for this experiment, I do so using  jovial verbiage.

Talk like a person not a brand when using your profile. Think of it as UnCopywriting. 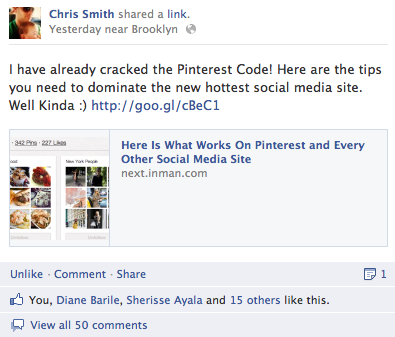 Pound for pound, my Facebook Profile had the highest Engagement Rate and there really was not a close second.

For those who think size does not matter online, may I point out that even though Tech Savvy Agent had the lowest CTR they had the second highest number of total clicks. Social Media is a numbers game if you look at it through this hub and spoke taught lens.

Sorry Chris Brogan. Most small business owners and web marketing branches of companies are still focused on using social media as a spoke through which to get people to their hub (website). I have been in a class taught by Chris Brogan where he drew this model on a white board and explained it clearly. The findings of this research would indicate that if I were following the hub and spokes model pictured at the top of this article I would look to Google+ only after Facebook Profiles, Groups and Pages.

Remember when Twitter followers were a bit easier to amass? Remember liking every Facebook Page thrown at you?

Google+ is bearing quantity for a lot of people in it’s infancy stage. The Engagement Rate of those connections however does not look good. 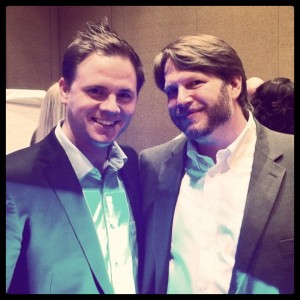 Facebook Groups Have Emerged As Highly Relevant, Pages Are Fading

I analyzed three very popular Facebook Pages of various sizes and age. Both Facebook Groups I looked at had a better Engagement Rate than any of the Pages. This may have been my biggest takeaway from the entire process.

Groups are winning because of the way notifications work. Facebook Pages simply can not compete with this as they must battle Edge Rank daily while Groups have powerful “Pull” capabilities.

Plan on Groups being a big part of your 2012 strategy. This is not a Group OR Page decision – it is a Group AND Page decision.

Facebook Profiles, Groups and Pages were one, two and three respectively when looking at Engagement Rate. 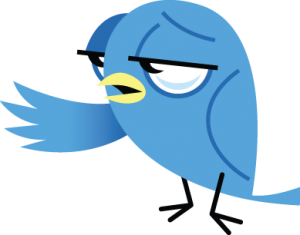 I have spent more time than is probably healthy building relationships and dropping links on Twitter during the past 3 years.

I have had DM’s that have led to multiple six figure business transactions.

I have had DM’s with six figure job offers in them.

When I saw that Twitter was dead last in clicks per connection it neither surprised me nor did it perturb me.

How often do you drop links when you text people? Isn’t texting still a valid form of communication?

The takeaway here for many should be just quit trying the link after link approach and instead start the one to one relationship or dare I say, ‘engagement firs’t approach. This would also apply to the Google+ findings.

Another factor with Twitter is the culture. It is very accepted to Tweet multiple times per day. Some people tweet a hundred or more times a day. This just does not work on Facebook so in that sense Twitter probably scores better if looking at clicks per connection per day than this format scored them.

WTDWTN (What To Do With The Numbers)

In a social media era where we have so many choices of platform within which to engage our customers, metrics like Engagement Rate need to be looking at closely.

You could complain below about how small the sample was.

You could also spend that time running the same kind of tests across your networks so that you start to establish benchmarks towards improving your brands performance across the most popular channels on the Internet.

In one sense I looked Engagement Rate.

In another, I may have stumbled upon the time best spent on the social web metric many have all been looking for.

Can’t wait to see what you write back in the comments!