by In search of Syd

With the new cash now safely in the bank, Curbed hopes to expand its coverage and add several new cities to its roster. Makes sense. I’ve always maintained that even in a down market, media is a safe (ish) bet because, perhaps more than ever, people are looking for place to find analysis and guidance (or a mutual sense of Schadenfreude) in real estate.

The danger with any media play, of course, is the business model is predicated on having a stable base of advertisers to support it. And it remains to be seen whether the fallout from the sub prime meltdown and credit crunch will have any larger impact on advertisers’ marketing spends – a subject that I’ve been following with keen interest for a while (see Storms Ahead for Real Estate Sites).

Part of my curiosity is that I remember the years after the ’00 tech bust being pretty lean for many technology publications. I remember this being illustrated quite vividly when my copies of Red Herring and Business 2.0 (R.I.P.) showed up on my doorstep and went from being the size of the local phone book to not much thicker than a pizza flyer in the span of no more than a couple of months.

Like most in this space, Curbed relies primarily on real estate advertising (a quick visual survey of their site reveals mostly ads for condo developments and one from Trulia) and so it is certainly at risk if there is a larger downturn. That said, I suspect their niche audience will still be attractive to smart advertisers and their low overhead makes them nimble enough to avoid any looming iceberg. 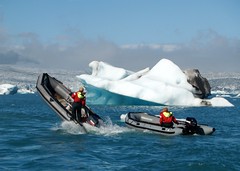 The titan in this space (Zillow) however, is much more heavily encumbered and faces a corresponding greater degree of risk.

From the NY Times:

At greater potential risk are national-focused sites like Zillow.com and Realtor.com that depend on an active market of buyers and sellers to thrive. Nonetheless, Zillow, which estimates home values, last month obtained $30 million in its latest round of financing, bringing the total to $87 million for the site, which was started less than two years ago.

Now, to their credit, Zillow has reached out beyond the real estate niche and courted some brand name advertisers (I saw DirectTV and Verizon on there this morning) – but to what degree of success? I have to admit I was surprised to still see Google Ads filling their Leaderboard position on the search results page for my zip code this morning (YMMV).

[Aside – It wasn’t even a well integrated Google Ad, either. The color scheme looked like one of the default palettes (Shadow, I think). Looked like someone had just slapped the Adsense code in there to fill out some unsold inventory. Pretty sloppy.]

So looking at Zillow’s ad mix right now – you’ve got some Google Ads, a handful of self-service agent driven ads (EZ Ads) and some big brand CPM campaigns sustaining a $90 million dollar investment. I feel like a bit of a broken record at times, but the big picture just doesn’t add up (pardon the pun).

In any case, the folks up in Seattle aren’t sitting idly by (they shouldn’t, they have some of the brightest minds in the biz on staff) and so I wonder if it’s not any coincidence that, alongside the article in the Times today, they announced their newest advertising product; Zillow Home Direct Ads. Home Direct Ads is a new intent-based advertising tool that allows advertisers to make an ad buy on Zillow that conforms to precise conditions based on consumer behavior on their site.

Pretty cool stuff. The two most interesting products in this release to me are the Move Predictor and Psychographic Clusters. From their news release:

Move Predictor: Because of Zillow’s extensive data on homes for sale and traffic activity around a home’s page views, Zillow can predic whether a household may be moving. This allows advertisers such as cable providers, financial institutions or home improvement stores to reach homeowners before purchase decisions around the move are made.

Psychographic Clusters: Advertisers can specify for their creative to be shown to households composed of any of the 65 psychographic clusters defined by the U.S. Census data, such as suburban households with children or high-income urban singles.

On Zillow Blog, Greg Schwartz, Zillow’s VP of Ad Sales, imagines a hypothetical scenario on how this could be used.

Imagine if a telecommunications provider could hone their advertising campaign to reach homes based on the products they have available on certain streets – down to a house-by-house level. For example, they could advertise sought-after high speed Optical Fiber Lines directly to the homes where the technology is available. Then target DSL to all other homes – as close as across the street!

This starts to make sense a little more. Zillow’s Intent based tools – which along with Facebook’s Interest-based targeting (see Marketing Yourself with Facebook Flyers) – should be intriguing to any sophisticated marketer and they have a right to be excited about it.

But – as cool as Home Direct ads are – the success of the site still depends on Zillow maintaining and growing its traffic (which by some measures, has been flattening lately). And that cuts to the heart of the matter.