Yesterday my Lytro camera arrived. This camera is based on a different model of operation than all cameras that precede it. I won’t bore you with all the geeky science (though I really really want to). The end result of that science is that you can focus a photograph after you take it.

Being able to focus an image after you take it gives you some new options in photography:

The first item should make for taking pictures quicker. Since that isn’t necessarily the big challenge in real estate photography (the property isn’t running for a touchdown, hopefully it’s staying pretty still) the opportunities afforded by the second will show up most in this review.

I figured since I knew I’d be writing about this camera for Inman Next I should, you know, take some real estate-y pictures. My friend Sybil at Burlington’s Coldwell Banker Hickok & Boardman Realty connected me with Chris von Trapp who has a listing for a condo on Burlington’s Lake Champlain. Chris and his buyers agent Bobby Webb met me at the property and the result is the Lytro images in this post.

I’m grateful to Chris and Bobby for letting me try out this new technology on their listing. I hope the readership here is too.

The Lytro camera has some definite weaknesses. Some, like the relatively low resolution have a clearer path to improvement than others. Let’s go through what I discovered on my first outing with the Lytro.

Images with something close and something far work the “refocus’ effect the most.

In normal photography you might try to get everything important for the picture to be at the same distance from the camera–this keeps the important stuff in focus. But the Lytro doesn’t work that way. You can focus the image after it’s captured. This gives you the opportunity to do some depth-of-field tricks.

If you have something near to the camera when you take the image the payoff for the viewer interaction is bigger.

[dciframe]https://pictures.lytro.com/gahlord/pictures/54002/embed,400,415[/dciframe]
Clicking the image above will refocus the image.

With the Lytro, since viewers can choose to refocus the image, you might want to put props or other things very close in the image. Doing this will help create the depth of field effect.

Some props near the window give something to anchor the refocusing capabilities of Lytro images.

In normal documentary style photography you want everything to show up clearly. But for creating the interactive images that Lytro captures you use focus as a way of defining space.

Space can be inside vs outside. In the image below the inside is anchored by pieces of the architecture of the condo, the metal window frames.

The effect can be put to use within a room as well, to help give a sense of interior space.

The Lytro and lighting.

This camera is particularly tricky when it comes to lighting. You’ll be best served in situations where the lighting is very even. For example, when all of the light in the room comes from the same source and at the same brightness.

All of the troubles you may have experienced shooting indoor images with bright sun outside will follow you into Lytro photography as well. The images in this post were all taken around 10:30am, the windows of the condo face west over Lake Champlain and the Adirondacks.

If I had life to live over I would shoot these images at the break of dawn, when the light outside is more faint–making it easier to match with the man-made illumination.

Getting the lighting right will require some experimentation for certain.

Note in the image above, for instance, how the ferry gets washed out into a solid mass of white.

In lower light images definitely become grainy. Combined with low pixel dimensions of images from this camera this can prevent images from looking very clear. But so long as the light is even this can be managed.

The above image was made in a room catching only indirect reflected sunlight through a window perhaps 30 or 40 feet away.

Since making the effect of the re-focusable image work required me to place an object in the extreme foreground I found myself thinking about composition of images differently. In every image I knew there would be a certain chunk of area taken up by this anchor object in the front.

Also, since I get to decide how the viewer first experiences the image I think about the sequential experience. First the audience will see this and then they will refocus and see that.

Issues of composition and sequence are more narrative than straight ahead “here’s a picture of the living room.” The kinds of images that are made with the Lytro require thought and planning in a different–more storylike–way.

This kind of image isn’t going to replace the standard documentary style image that most MLS listings have. But perhaps they will augment those images to help create a greater depth of understanding about the space itself.

I found myself seeking out architectural or compositional components to make these sorts of images.

Some parting thoughts about the Lytro

Making a more narrative interactive image takes time. Finding the up-close anchor object or architectural detail requires planning. This process eliminates the feature of “not needing to focus” because, frankly, thinking about imagery this way takes longer than it does to focus a camera.

The camera itself is a beautiful object. Unfortunately some of that beauty is at the cost functionality. A square tube, it is not quickly apparent through touch which side is up when you raise it to capture an image. The time it takes to read the logo and flip the camera around is easily as much time as it would take an autofocus to operate on a standard camera.

The process of choosing a white balance, using your finger to tap the screen on one end of the tube, is also a haptic flaw. You want to put it up to your eye like a spyglass. There isn’t enough room to wedge your hand between the spyglass and your face. Once you’ve overcome this challenge, your finger and hand will easily cover the majority of the flat screen–obscuring the stuff you need to see in order to select a white balance.

This camera isn’t impossible to use or anything. It just has these little flaws. Flaws that stick out primarily because they’ve done such an excellent job making it into a beautiful object, with beautiful packaging and hands down the best on-boarding process for a piece of computer hardware I’ve ever seen (the software required to download and edit images from the camera are in the camera itself–no going to a crappy website and searching around for drivers). 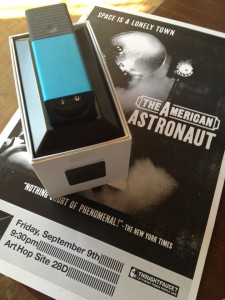 I strongly suspect that the Lytro will proceed along a path that appeals primarily to art photographers–and will gain traction there slowly due to the low pixel dimensions of the images.

Eventually the technology will shrink enough to get into a “normal” camera that looks and operates like a point and shoot. Or the Lytro itself will advance to the point where the white balance issues are no longer issues.

At that point the technology itself will be taken for granted as great feature of every camera. We’ll tell young people that, once upon a time, one had to choose what to focus on before taking an image. This will be much the same as we tell young people today that, once upon a time, we had to decide whether or not to take a picture because we only had twelve shots before we had to reload the camera.