“Is caffeine addictive? Certainly, it produces tolerance and withdrawal symptoms if it is stopped abruptly. But even though it is the most widely used drug in the world, few caffeine users exhibit signs of serious addiction — namely, compulsive drug-related behaviors despite negative consequences. That could be in part because caffeine is legal and easily and cheaply obtained. Or, it could be because the effects of caffeine use — especially in a hyperefficient society — are generally positive.”

Maia Szalavitz: “What We’ve Been Waiting For: Zero-Calorie, ‘Inhalable’ Caffeine”

If it’s one thing we see a lot of in the morning Twitter stream, it’s real estate professionals checking in to coffee houses. Indeed, in many ways it seems like it’s the jet fuel on which our industry runs. Recent studies into the chemical effects of caffeine’s impact upon the body of shift workers found that it reduced the number of driving and operating errors, as well as improved memory, reasoning, perception and attention, compared with a placebo. Further, the research found that an approximate dose of caffeine of around 20 milligrams an hour is more than sufficient to counter the effects of sleep deprivation, and to help improve and enhance cognitive speed. No wonder it’s the legal drug of choice for many of us who work long hours.

On the other hand, caffeine’s destructive effects upon the body are also well-documented online, the most notable being that it produces tolerance and mild dependency, and if stopped abruptly, it can cause withdrawal symptoms. However, there’s no doubt that caffeine, and coffee in particular, plays a significant role in the modern workplace. But as the caffeine industry evolves, through glamorous energy drinks, caffeinated gum, and even mixes with alcohol in the form of the infamous Four Loko, one recent development, available since last month in New York City, is offering a fresh perspective on an old habit, and might just pave the way for a completely new way of thinking about how we consume food and drink.

“Caffeine products are being reformulated to be sexy and appealing.”

The brainchild of Harvard University professor of biomedical engineering David Edwards , the AeroShot caffeine pellet contains 100 milligrams of caffeine, mixed with other B vitamins and citrus flavors, and is designed to be inhaled in small doses, through a small, shotgun-shell-sized-like tube. It currently retails from Manhattan newsstands and health stores, for $2.99, or about the same price as the average latte. It’s promoted as “breathable energy,” and delivers a short, sharp hit of caffeine with about the same effect as drinking a strong cup of joe. Importantly, despite initial concerns, including a letter from New York Democratic Sen. Charles Schumer to the U.S. Food and Drug Administration (FDA) outlining the dangers of mixing it with alcohol and the sale to minors, caffeine-related products do not currently require FDA approval.

The biggest selling point of breathable caffeine is that there’s no stained teeth, no bad breath, and perhaps most appealing, no calories. In an already overcrowded market of energy drinks, the benefits of no sugar will appeal to many, and it’s already being strongly marketed to adults who enjoy nightlife. Caffeine (and in turn coffee) is naturally bitter, so the shot also includes Stevia, an herbal sweetener that’s up to 300 times sweeter than sugar, but with none of the calories. The allure of creating breathable food with zero calories leads to obvious applications for the development of other breathable meals outside of just caffeine. 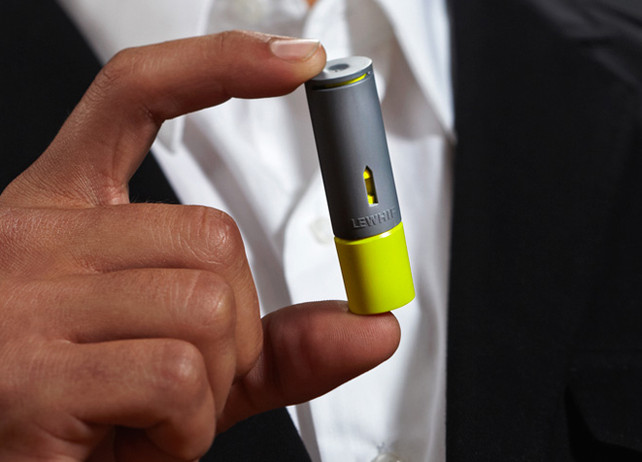 Professor Edwards has been experimenting with how we consume and absorb tastes and flavors for the past five years, and his work is developed in Paris, ironically one of the gastronomic capitals of the world. So far he has released a similar product to the AeroShot, called “Le Whif” , which is intended to maximize the experience of eating dessert, without any of the calorie-induced side effects. It’s breathable chocolate. Containing about six to eight puffs of synthetic chocolate flavor, more than enough to satisfy a craving or create the simulation of eating dessert, it coats the inside of your mouth with the “essence” of chocolate“. Many have described it as sucking small pieces of cocoa powder through a straw, and how it “feels” the same as eating a real dessert. Notably, the fine powder doesn’t hit your lungs (it’s too big to pass beyond your throat), so it’s not truly ‘breathing’ the food, the digestion process is more like drinking than eating.

“Coffee makes us severe, and grave, and philosophical.”

As Edwards illustrates, the nature of how the caffeine inhaler is packaged has wide-reaching opportunities for the medical community, and inhalable vaccines are already available and proving popular. Just like how breath mints are being repackaged into dissolvable strips, the AeroShot has far-reaching potential for delivering vitamins, medicine, anti-viral shots and vaccines in incredibly affordable ways. They also meet the Transportation Security Administration (TSA) requirements, so traveling with them is much less of an issue than other types of energy drink packaging. As Edwards’ team is keen to point out, the canister is also biodegradable.

“We are the music makers, we are the dreamers of dreams.”

Building on the success of Le Whif (they sold 200,000 units last year alone), Edwards has developed a larger-scale model intended for restaurants called “Le Whaf“, in which the diner breathes from a goldfish-bowl-like device, and has the experience of a full meal, instead of just a snack. Edwards proposes that this could pave the way for the future of restaurants, or even perhaps the future of eating. He imagines restaurants where diners simply walk around and breathe in from the bowls in order to experience the full menu. As fantastical as it seems, Willy Wonka’s three-course-meal chewing gum, which becomes the demise of the insufferable Violet Beauregarde, is now a very real scientific accomplishment.

One interesting variation of Edwards’ work comes from Spanish designer Marti Guixe, who has developed what he terms “pharma food — a system of nourishment by breathing.” What Guixe proposes is the transformation, just like so many other aspects of our lives (music, television, movies, reading) of food into pure information. His product frees the regimen of eating not only from its location (the home or the restaurant), but also from its traditional consumption by the body. It’s going beyond simple aerosolized nutrition; it’s using data to create the same experiences as eating a meal, through the translation of chemical tastes and sensations into data, which can then be shared seamlessly across the world, just like an email attachment. Guixe’s work connects the pharma food generator (like Edwards’ goldfish bowl) to a computer, which then receives the specific input of a combination of tastes and chemicals (from a spreadsheet), which in turn generates the sensation of flavor when consumed. The code of each flavor represents the specific “language” associated with each food type, potentially allowing diners to “compose” meals and share them with each other, “like an MP3,” explains Guixe.

This poses an interesting question for that cornerstone of the American home, the kitchen. If we are able to eat digitally, anywhere, what does that do to the idea of what the kitchen represents? The kitchen is traditionally perceived as the gathering place for the family, and the specific act of cooking is part of the glue that brings friends and families together. Cooking is in many ways at the heart of memories, with smell closely associated with how we remember certain aspects of our lives. If the concept of synthetic, breathable food begins to take hold at scale, it begins to not only erode the number of devices we need in our kitchens, but also the amount of time we spend in them. Just as the microwave reduced the amount of time spent cooking in favor of convenience over the past 25 years, breathable food as pioneered by Edwards and Guixe’s incredible scientific product design might also pave the way for a more dramatic shake-up of what it means to spend time together in a home.

Tom Cheshire: “The Meal Inhaler: The Future of Breathable Food”

Laura Powell: “Anyone for a Puff of Lemon Tart?”

Maia Szalavitz: “What We’ve Been Waiting For: Zero-Calorie, ‘Inhalable’ Caffeine”