“Foursquare has to be really careful here. If the Radar suggestions are helpful and get people to do actually explore their cities, it will be a big hit. But if the suggestions aren’t that good, the notifications will just become annoying and people will turn them off.” 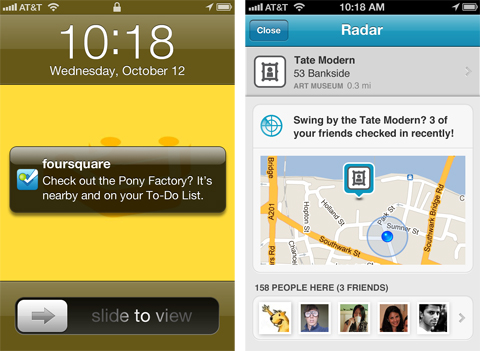 Over the past year, many of Foursquare’s updates have centered around facilitating the building out of great content within the service, and moving beyond just the simple check-in and game dynamics they’re so often associated with. Much of this has been bundled into the central ‘Explore’ tab, which serves up local recommendations for a wide variety of things to do nearby, based on what you’re friends like and locations that you’ve never been to which you might enjoy, all based on what you’ve done before. It helps you explore the world around you in new and interesting ways.

It’s a great example of how location-based services are moving beyond the simple sharing of ‘Where am I?’ and into the real world of providing value based on where you (and your friends) are right now.

Their latest round of updates takes this idea a big step further, leveraging some new features of iOS5. If you’re following a list of things to do (such as this one: http://4sq.com/o9ge9w), or have checked-in to a venue in the past, seen a tip and thought ‘I’ll add that to my to-do list’ – when you’re near something that you haven’t done, you’ll now be sent a notification saying you’re close by. You don’t even need to have Foursquare open for it to do this, and that’s the big step forward here.

For example, if you’ve visited The Shake Shack in New York, seen a tip you’ve liked, and added it to your to-do list, now when you visit Madison Square Park at a later date, it will remind you, via a pop-up notification on your phone, that there’s something you wanted to do nearby.

It also pings you when your friends are doing things nearby, and this builds a wonderful social layer into the notifications. If a group of your friends are checked-in at a nearby bar, and you’re close by (but importantly, didn’t know they were out and about), your phone will now tell you, facilitating a large part of the ‘serendipitous discovery’ Foursquare are interested in leveraging.

The service works by using data stored from what you’ve done in the past, what you’re friends have done, things you want to do, and popular things nearby you haven’t done. As always, localized venue tips and photos remain a core part of that discovery process. All this information gets processed by Foursquare’s ‘Explore’ algorithm, and then recommendations, and now notifications are generated and sent to you.

So why should real estate professionals care about this?

It marks one of the first large-scale steps into social and location-based notification recommendations, especially as you don’t need to be using the app itself for it to work. This is something we’ll see a lot more of in the future, with recommendations automatically being pushed to you based on what you’re interested in and where you are. It opens the door onto a whole new exciting world for brands and business to further ‘pull’ customers into their venues. Think about how this changes a trip to the mall.

But what would such an approach look like for real estate? Imagine you were using an app that allowed you to save searches, or the details of what kind of home you’re interested in – many apps already do this, but only this. Instead of having to open up the app, check the results, re-do the search, and wade through the sea of results, you’d now be notified of that open house for that new listing that just hit the market, that’s going on 5 blocks away right now. It’s powerful stuff. The search is truly going to come to you in a dynamic and more meaningful way. It’s a further nail in the coffin of classified advertising.

It will be fascinating to see how this approach develops. There are concerns about what this ‘always on’ type of push notification will do to the iPhone’s already fragile battery life. Erick Schonfeld’s concerns about what will actually get pushed to the user are well founded, and again come back to the quality of the venue tip writing. As with many Foursquare initiatives, urban use will be higher than rural use, and the denser the concentration of venues, the more likely it will be to serve more accurate recommendations.

Most importantly, it’s incredibly exciting times for this type of technology, and as platforms such as Foursquare’s develop ever more innovate ways to explore and discover the world around you, the real estate industry is perfectly placed to take advantage of all of these new ideas.

Now get out there and go somewhere new!